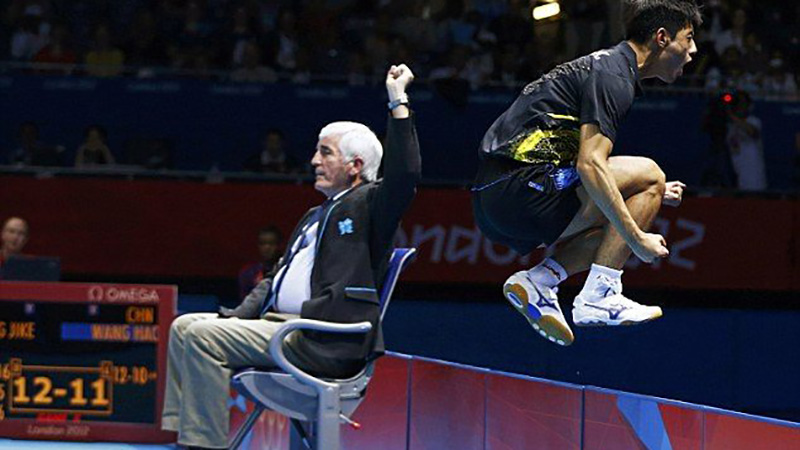 Previous Olympic men’s singles finals have been the subject of a recent trip down memory lane on the ITTF website – including the 2012 London final, which was umpired by our very own Tom Purcell.

Here, Tom recalls his pathway to officiating at that gold medal match between Wang Hao and Zhang Jike, and describes how Table Tennis England’s umpire education programme aims to set more English officials on the same trajectory, helped by the affiliation fees paid by our members.

In July 2005, GB was awarded the 2012 Olympic Games. To umpire at the Games, I would have to be an International Blue Badge Umpire (BB), which is the highest level of umpiring.  In 2007 I took the Advanced Umpiring Examination and was successful and this allowed me to umpire at all the major ITTF  tournaments.

Since then I have umpired at many ITTF events around the world, including the World Championships in Kuala Lumpur (2016) and Sweden (2018). I have also umpired at three Commonwealth Games – Manchester (2002), Glasgow (2014) and Gold Coast (2018). Hopefully, I will be umpiring at the Commonwealth Games in Birmingham in 2022.

A couple of days before the Men’s Singles final I discovered that I had been selected to umpire the final with a colleague from South America. I had already umpired the Men’s Team semi-final between Germany and China, so it was a very pleasant surprise to discover I had also been selected for the singles final.

The final between Wang Hao and Zhang Jike was played with only one problem, concerning a disputed edge ball, but Zhang Jike was well on top and went on to win the final 4-1. As the final game was being played I noticed that all the photographers were congregating at the end of the table near Zhang Jike. As he won the final point and the gold medal I raised my arm to indicate that he had won the point. At the same time Zhang Jike cheered, ran and jumped over the surrounds and kissed the medal plinth. The photographers took many photographs, including the one at the top of this page, and it appeared in newspapers around the world the following day.

At the beginning of 1994 I hadn’t thought of becoming an umpire but I was persuaded to do so and I received good training from the ETTA and colleagues. I worked hard, attending tournaments in England and around the world, gaining lots of experience.

The same can happen for others. I am coming to the twilight of my international umpiring career but Table Tennis England and the ITTF are actively trying to recruit new and younger umpires. If you are a young male or female and are prepared to put in the hard work, you will be able to travel the world and see the world’s top players.

Click here to find out about our officials’ pathway.

Click here to read about how your affiliation fees play a crucial part in helping us to support and safeguard the sport for current and future players.