Liam Pitchford was knocked out in the semi-finals of the Czech Open after continuing his momentous year by taking out Dimitrij Ovtcharov in the quarter-finals. 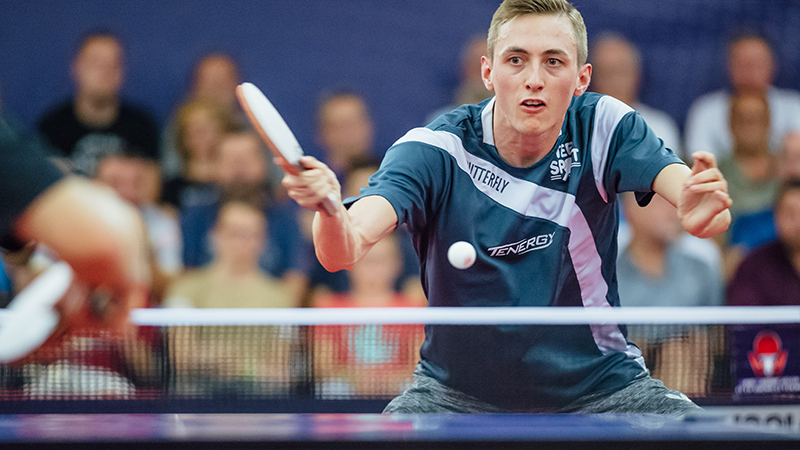 Liam Pitchford was knocked out in the semi-finals of the Czech Open after continuing his momentous year by taking out Dimitrij Ovtcharov in the quarter-finals.

Chinese opponent Zheng Paifeng was the man who ended the Englishman’s run, coming out on top 4-1 and not allowing Pitchford to impose his game, as he had earlier in the day against the German top seed.

Pitchford saved a game point on his way to taking the third and then led the fourth 5-3, but his penholder opponent got on a roll to take that fourth without Pitchford adding another point, and a 3-1 lead was always a big ask to recover from.

But Pitchford can take so many positives from his work over the last week on the World Tour, with victories over Ma Long in Bulgaria and Ovtcharov here and a sense that there are plenty more special performances to come.

In the quarter-final, after sharing the first two games with the great German, Pitchford romped away with the next three, playing at his tempo and imposing his game on an at times bemused opponent.

Pitchford took the opening game 13-11, saving two game points, but saw a 10-7 lead evaporate as Ovtcharov came back to take the second 12-10.

The fact that Ovtcharov had taken his time-out at 4-5 in that game suggested that he and coach Jorg Rosskopf were rattled, and Pitchford showed they were right to be as he never allowed the German back in.

A vicious forehand winner settled the third 11-4 and the next two followed 11-7 and 11-6 – and although Ovtcharov saved two match points, a comeback never looked likely.