‘Millionaire’ winner tells of his passion for table tennis

Who Wants To Be a Millionaire? winner and local league player Don Fear is looking forward to playing more table tennis in the wake of his spectacular success on the ITV show. 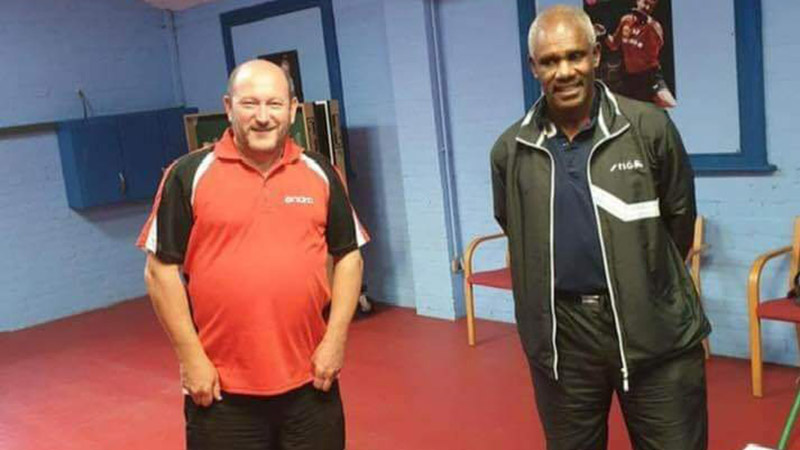 Who Wants To Be a Millionaire? winner and local league player Don Fear is looking forward to playing more table tennis in the wake of his spectacular success on the ITV show.

Don, 57, scooped a cool £1 million last week – only the sixth person ever to take the top prize on the show.

And while he plans to retire from his job as a teacher at the end of this term, he says he has “no plans whatsoever” to retire from table tennis – he is Chairman of Lilleshall TTC, based at the National Sports Centre near Telford, and plays in the Telford League.

He said: “I’m rather hoping to pick it up and play three or four times a week – if the aching muscles allow!”

Don started his career in table tennis at a local youth club and then while in the sixth form at school in Somerset. He said: “There was a table in the corridor at school and we were only supposed to play at break time.

“We used to play in free periods too – or study periods as they were officially – and had to skedaddle when a teacher came past!”

Don later played while at Swansea University, representing the university a couple of times in the Welsh universities league, but he then lost touch with the sport for a few years and played badminton instead after first moving to Telford.

“Then I saw an ad for a team at Lilleshall, at the National Sports Centre,” he said. “It was about 1999. I joined and eventually became Chairman.

“I never played at any great level except a few matches in the County Championship veterans. I have extremely modest talents but I really love it and enjoy it. It’s been a big part of my life, certainly over the last 20 years.

“I mostly play in Division 2 and have an 80 or 90% average. I’m a yo-yo player and it’s a yo-yo club, and in Division 1 I’m still taking good players to five – usually I win the first two and then they come back and beat me!”

The photo above was taken by Don’s friend and club-mate Terry Ridgway, who is also the league chairman, at a chance meeting with Des Douglas recently.

Don said: “Des was coaching (England player) Charlotte Bardsley at Albrighton TTC and Terry cheekily asked if he could coach us afterwards.

“He gave us some very good tips which I’ve tried to put into practice since, but my bad habits are so ingrained! Des is one of my two table tennis heroes, the other being Jan-Ove Waldner (1992 Olympic champion from Sweden).”

Don, who teaches history and politics at the Haberdashers’ Adams Grammar School in Newport, Shropshire, says the questions fell nicely for him – the £500,000 question was on politics and the £1 million one on history. He has been celebrating with his family since then win, as well as dealing with a series of media interviews.

He said: “It’s been an amazing time and quite surreal, and talk about everything falling in my lap with the history and politics questions – I can’t complain!”