Medals galore for England in Guernsey

England returned from the Senior Schools International in Guernsey with 27 medals – 10 of them gold. 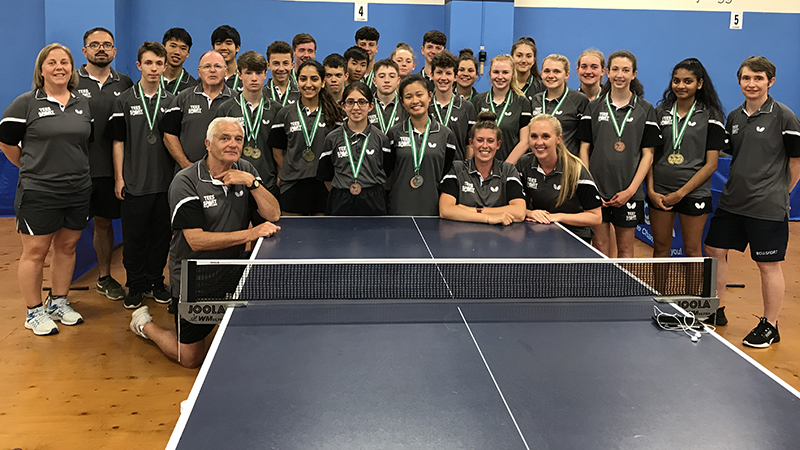 England returned from the Senior Schools International in Guernsey with 27 medals – 10 of them gold.

England’s Boys and girls competed against players from Scotland, Wales, Ireland, Jersey, Guernsey and Isle of Man in Under-18, Under-16 and Under-14 categories.

England’s contingent also included two junior umpires, Flynn Connolly and Tom Konarski, both from Grantham. Despite their young age, they demonstrated excellent umpiring skills throughout the weekend, especially in many close team matches.

The competition started with the team events, and it was in the under-16 that England particularly excelled, as both boys and girls took gold and silver.

In the girls’ event, England A (Danielle Kelly and Anaya Patel) and England B (Gemma Kerr and Amy Marriott) both topped their groups.

In the semi-finals England A faced Wales, and got off to a great start with Kelly beating Lauren Stacey, and Patel beating Grace Clement. Despite Wales fighting back to win the doubles in five, Kelly went on to beat Clement 3-1 to secure their place in the final.

In the final, Kelly and Patel were too strong for the B team, and won the match 3-0. Kelly beat Marriott 3-0, Patel defeated Kerr 3-1, and they then secured the gold with a 3-1 doubles win. Ireland took the bronze.

Both boys’ teams also won their groups, and England B (Jacob Evans and Bertie Kelly) then won a preliminary round match against Ireland.

In the semi-finals, England B faced Wales and Jacob Evans beat Louie Evans 3-0. This was followed by an awesome comeback by Kelly from 0-2 down against Joseph Roberts to win 3-2. Evans and Kelly secured their place in the final through beating the Welsh pair in the doubles 3-1.

In the other semi-finals England A (Joseph Hee and Ryan Choong) faced Scotland A a tricky match, with Scotland’s Martin Johnson beating Choong. Hee levelled the match with a 3-0 win against Charlie Morton. As was the case in many matches over the weekend, the doubles proved to be a pivotal game. The attacking and defensive combination of Choong and Hee proved too much for the Scotland players, securing the win in four close sets.

Hee versus Johnson then went the distance. Hee battled back from 1-0 down to go 2-1, 10-8 up, only for Johnson to fight back to take it to the decider. Hee proved to be the better player, taking the fifth set 11-1 to earn a place in the final.

Once again the final was England A versus England B. The A team took a 2-0 lead as Hee beat Kelly and Choong overcame Evans. The B team continued their successful doubles form, beating Hee and Choong 3-1, but Hee secured the Gold be defeating Evans. Wales won the bronze.

England’s other golds went to the boys’ teams in the Under-14 and Under-18 categories.

In the semi-finals, England A defeated Scotland A 3-0, while England B got past Ireland 3-1, Hunter losing to the Irish left hander Maitiu Heckmann.

Piggott and Davies started well, by beating Hunter and Green respectively, but England B took the doubles. Piggott secured the gold medal for England A by beating Green 3-1, while Ireland took bronze.

England B (Sam Chesterman and Peter Smallcombe) topped their group with 5-0 wins against Jersey and Wales. In the semi-final they faced Scotland A. Smallcombe beat Danny Bajwa 3-1, however, Scotland’s Dylan Curry levelled the match with a 3-2 win against Chesterman. The doubles went the distance with the Scottish pair winning 11-4 in the deciding set.

Smallcombe beat Curry in the fifth set, fighting back from 2-0 down to win the latter three sets 13-11, 11-9, 11-4. Bajwa coped with the pressure of the final match, beating Chesterman 3-0, and putting Scotland into the final.

England B won bronze, beating Ireland in another close match. Smallcombe beat Conor Nugent 3-1, followed by Chesterman beating Alan Pattison 3-1, to go 2-0 up. However, Ireland levelled the match score by winning the doubles 3-1, and Pattison beating Smallcombe 3-2. Chesterman proved too strong for Nugent winning 3-0 to secure the bronze medal.

In the Under-14 Girls, the two England teams met in the semi-finals, as England B (Erin Green and Maliha Baig) won their group and England A (Raquel Sao Pedro and Sandy Choong) were runners-up to Wales, who beat them 3-2.

England A came through a preliminary round against Ireland and the semi-final was a close-fought battle. Green fought back from 2-1 down to beat Sao Pedro. Baig, the youngest member of the England team at 11, lost 3-1 to Choong.

The Green & Baig doubles combination beat Pedro and Choong in the fifth, before Green battled back from 2-0 down to take Choong to a decider, but Choong held on to win. Sao Pedro, the slightly more experienced and older Cadet beat the recently crowned Under-12 national champion Baig in three close sets to progress to the final.

Pedro and Choong faced Wales once more, and once again the doubles proved to be the crucial match. Anna Hursey & Ruby Elliott were the winners of the four-set battle and, added to the two singles wins from Hursey, guaranteed Wales the gold, despite Choong beating Elliott in three.

England B comfortably beat Jersey A 3-0 to claim the bronze.

In the Under-18 Girls, England A (Gauri Duhan and Sophie Barlow) had to settle for silver in a tough event, which saw them start with a 3-1 defeat against Wales, losing two matches in five sets.

England B (Katie Holt and Federica Bonato) also had a tough first match against Ireland A and were on the wrong end of 5-0 defeat.

Both teams qualified for the semi-finals in second place in their groups, but the B team went down 3-0 to Wales.

The other semi-final was a thrilling match in which England fought back from 2-0 down to beat Ireland. Duhan lost to Thuy Linh Cashman, and Barlow then went down to Mia O’Rahily Egan.

In the doubles, Ireland fielded Lucy Craig alongside O’Rahily Egan and the English girls proved to be the stronger pair winning in four close sets. This was followed by Duhan playing positively and consistently against O’Rahily Egan, winning in five. With the momentum going in the direction of the English girls, Barlow’s determination proved too strong for Cashman, winning 3-0.

The final between Wales and England A was a repeat of their group and despite England winning the doubles 3-1, Richards won two singles and Whitton beat Duhan in four to give the Welsh team the gold medal. In the bronze-medal play-off, Ireland beat England B 3-0.

England won five of the six main gold medals and a clutch of silvers and bronzes as they continued their dominance from the team event.

The Under-14 boys took pride of place as the clinched a clean sweep of the podium, with Rhys Davies on the top step, ahead of Ben Piggott in silver and Joseph Hunter and Connor Green with bronze.

The under-14 girls won three of the four medals, missing out on gold to outstanding Welsh youngster Anna Hursey.

Anaya Patel was the corresponding girls’ champion, though she had to withstand a comeback by Ireland’s Mia O’Rahilly Egan in the final before prevailing 3-2 (11-8, 11-9, 4-11, 9-11, 11-8). Patel had earlier beaten team-mate Gemma Kerr in the quarter-finals.

Katie Holt reached the semis, beating England colleague Danielle Kelly on the way. She had to settle for bronze as she was defeated by O’Rahilly Egan in the last four.

In the senior age group, England won both golds through Gauri Duhan in the girls and Sam Chesterman in the boys.

Duhan came through 3-0 (11-7, 11-8, 11-8) in the final against Wales’ Beth Richards. Sophie Barlow reached the quarter-finals, where she was beaten by Thuy Linh Cashman of Ireland. Federica Bonato added the girls’ consolation gold to the English haul.

Harry Watson lost in the first round to Ben Foss of the host nation.