The 15th Bishop Auckland Bribar 2* over the Bank Holiday weekend saw Callum McRae come away with a double win; both the Cadets and the Junior Boys events. 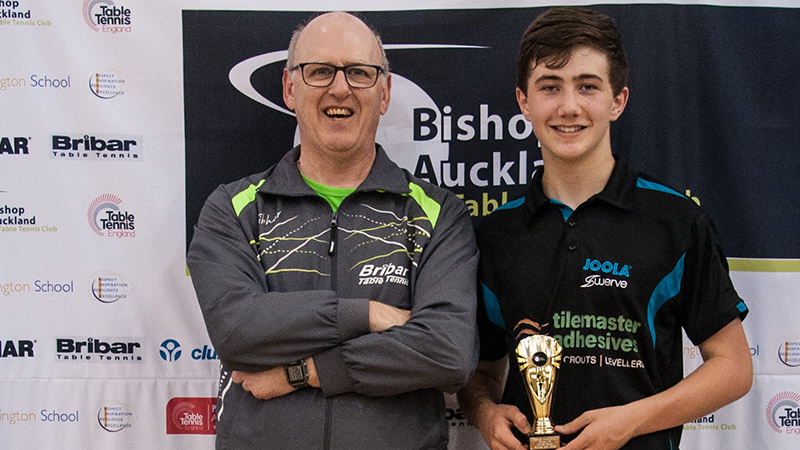 The 15th Bishop Auckland Bribar 2* over the Bank Holiday weekend saw Callum McRae come away with a double win; both the Cadets and the Junior Boys events.

The Junior Boys saw a mix up of the Cadet Boys, with Callum repeating his win over Che, this time in the semis, to meet club-mate Jamie Peacock in the final. Non-seeded Jamie had a great run, beating fourth seed Max Duffin in the quarters, and John Strang in the semis who had forced second-seeded Rowan Jones into the top half of the draw by beating him in the group.

The Junior and Cadet Girls were nearly a similar story. The Cadet final saw the top two seeds square off, top seed Kirsty Maull from Staffordshire and Yorkshire’s Moke Warbuton the second seed. Moke came though, winning in three to take the title. Bishop Auckland’s own Anya Milne and Amy Mold were the two losing semi-finalists, both having beaten higher ranked players to reach the semis.

The Junior Girls saw Kirsty get her own back, beating Moke 3-2. Kirsty won it 12-10 in the fifth after being 2-0 down in a great match to watch. Steffi Popa finished fourth and Eve Witterick in third place.

The Junior Boys’ plate was an all-Durham affair, with Jordan Dove overcoming Matthew Pearson. The Cadet Girls’ plate was won by Katie Bates, overcoming Natasha Richardson. The Cadet Boys’ plate event was won by Nathan Spuhler, beating Jai Mistry-Moulton in four sets, but Jai made up for his final defeat by taking home the Under-13 plate title, beating his Cliffedale Chandlers team-mate Gregory Fray, who incidentally, he had beaten in the Cadet plate semis.

The Under-13 Boys saw unseeded Luke Lowther from St Marys Hull take the title, beating Bishop’s Jake Haygarth in the final, Luke also pimpled his way past Jake in the group with Jake having to take out second seed Sam Lowe in the first round to reach the final.

The Under-13 Girls was a group of five, with four of the players all being in the top 25 under-13s in England. Top-seeded Anya Milne came out as winner and second-seeded Katie Bates in second, only losing to Anya.