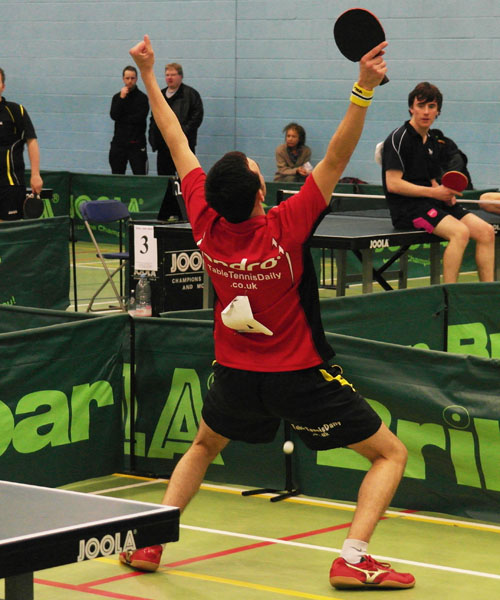 Maynard, who struggled to find his way to the venue earlier on, was much more confident on the table as he navigated his route through the groups and the early knockout rounds.

In the last eight he pulled off his first big victory by stunning the fourth seed Matt Ware in a pulsating encounter, ebbing and flowing one way and then the next before he could finally secure a 3-2 (11-7, 10-12, 5-11, 11-7, 11-5) win. That match was Ware’s last for a period of time as he prepares to undergo knee surgery in the week.

Following the win, Maynard had a long wait for his semi-final as a slow earlier group involving qualifiers Richard Andrews and Ernest Mpundu meant that the Men’s Singles ran long past its schedule.

During the time the top half of the draw was delayed, second seed Gavin Rumgay advanced to the final with 3-0 victories over Daniel Lawrence and Damien Nicholls before he produced an incredible recovery from 2-0 down against Richard Andrews to win their semi-final clash.

When the top half of the draw caught up there were some spectacular results in the mix. Free-flowing Helshan Weerasinghe raced past Niall Cameron 3-0 before producing the biggest result of the tournament by knocking out Grand Prix King Ryan Jenkins 3-2 (13-15, 6-11, 11-9, 11-7, 11-5) in their quarter-final.

When Maynard and Weerasinghe met they produced another exhibition of excellent table tennis, the Sussex-born youngster was on fire but Kingfisher player Maynard showed real grit to recover from 2-1 down and win 3-2 (4-11, 11-3, 10-12, 13-11, 11-7)

That set up a final between two former Bristol Academy players with very differing grand prix experiences, Maynard hoping for a first Men’s Singles title, while the Scotsman was hoping to further his long engrained record.

As it turned out it was the youth that triumphed over experience as Maynard won his maiden Men’s Singles title with a 3-1 – securing the third game crucially 12-10. He led 8-0 in the fourth, but had to survive a nervy comeback from Rumgay before he could finally celebrate with an 11-7 game.

The English No. 1 was hot favourite for the main prize and marked her run to the final with an almost unblemished record on Sunday afternoon. Although she dropped an end in her group to Sophie Neil, she was constantly able to up her game in the crucial moments, twice winning games in deuce to beat Lynda Flaws, Natalie Slater and Lois Peake all in three straight games.

On the other half of the draw, second seed Emma Vickers produced a much more workmanlike performance to reach the semi-finals.

There she faced Yolanda King who was much more straightforward in her progression, winning all her matches in her group 3-0 before producing knockout round victories over Sophie Neil (3-0) and Clara Chau (3-1). But King, unlike Scots Whitaker and Edwards, was able to close off her match with Vickers to end the battling second seeds campaign with a 3-2 (11-7, 5-11, 11-5, 10-12, 11-7) triumph.

In the final it was the top seed from Warwickshire who started the fastest with 11-4 and 11-9 games, but rather than being blown away, the 19-year-old from Sussex won the third game 11-8, showing she was far from finished.

The pair fought out a close and aggressively attacking topspin to topspin fourth end, much to the delight of the gathered crowd, but the extra experience of Sibley came up trumps in the end with an 11-8 game to close out her second consecutive Women’s Singles title.

Men’s Under-21s
Lewis Gray made the most of his return from training in Germany to pick up another Men’s Under-21s title, this time from the Innovation Sport Park in Nottingham after he beat Sam Mabey in the final.

The top seed, who was disappointed to miss out on a Men’s Singles semi-final earlier, made quick amends in the evening by waltzing to the title without dropping a single end.

His perfect record began with three group games victories including a 3-0 (12-10, 11-7, 16-14) win over Sepehr Bidari – the only man to get more than eight points in a single end against the youngster.

In the knockout rounds he demolished Josh Band, George Falcus and Ryan Fellows before meeting Mabey in the final.

Women’s Under-21s
Yolanda King picked up her second Women’s Under-21 title of the season at Nottingham after final opponent Katie McGlone had to fly home before their clash.

It was an unfortunate end to the tournament as the event missed the major climax it was heading for, however, both players could have been pleased with their efforts up until that point.

King, who was still riding a high after reaching the Women’s Singles final, faced McGlone in the opening group fixture where she won by a competitive 3-0 (11-9, 11-6, 12-10) scoreline.

Unfortunately that was as far as the tournament progressed as McGlone had to catch her flight home to Ireland, denying either player a final shot at the top prize.

With both pairs involving a player from the late-running Men’s Singles final, the tournament went long into the evening and was the last event to finish by a distance.

In the group stages Andrews and Maynard beat Tony Stead/Richard Johnson 3-0 and Kev Dolder/Joe Pilkington 3-1 to win their group while Scots Rumgay and Cameron beat Kevin Kan/Eddie Liu 3-0 and Adam Nutland/Luke Walsh 3-1 to secure their progress.

The final was loud and dramatic, due to both the calibre of the players and the character of the teams, in a full-distance battle that produced a lot of excellent rallies.

As the last match of the weekend, it spent its due course by heading to five ends before Maynard and Andrews closed the curtains on a successful campaign by clinching the final game 11-9.

Veterans
Tomasz Rzeszotko won another Veteran’s title at the Bribar Nottingham Grand Prix with a final victory over Shaun Bibby.

Rzeszotko dropped just a single end in the entire tournament, which came in the final to Bibby, as he was excellent throughout proceedings late on Sunday evening.

After winning his group he brushed aside Boguslaw Okonek in the quarter-finals, which could have had something to do with Okonek’s group campaign in which he experienced three consecutive five-game matches.

The top seed then beat Hon Kau Choy 3-0 to make the final where he met Bibby who, until that point, had dropped just a single end himself in the groups before two 3-0 victories over Michael Pestka and defender John Magnall in the knockouts.

Their final was very combative and evenly-matched with the first three games all ending 11-9. However, Bibby was left to rue a blown 6-0 lead in the third as Rzeszotko won the fourth 11-5 to complete a 3-1 win.

While Owadally quietly progressed past Richard Johnson, Kieran Smith, Patrick Green and Josh Robinson to make the final, there was drama in the other side of the draw.

However, in the final it was Gary Whyman, a semi-finalist from Bristol, who met Owadally at the last stage. A couple of shots later and Owadally had won the £32 ahead of Whyman who will hope for third time lucky next grand prix.

– Congratulations also to Nicolas Leung, who was the Bribar Player of the Tournament, Leung won Band 2 yesterday, was a semi-finalist in Band 1 and progressed in the Men’s Singles, only to narrowly miss out on a big win against Kev Dolder 13-11 in the fifth.