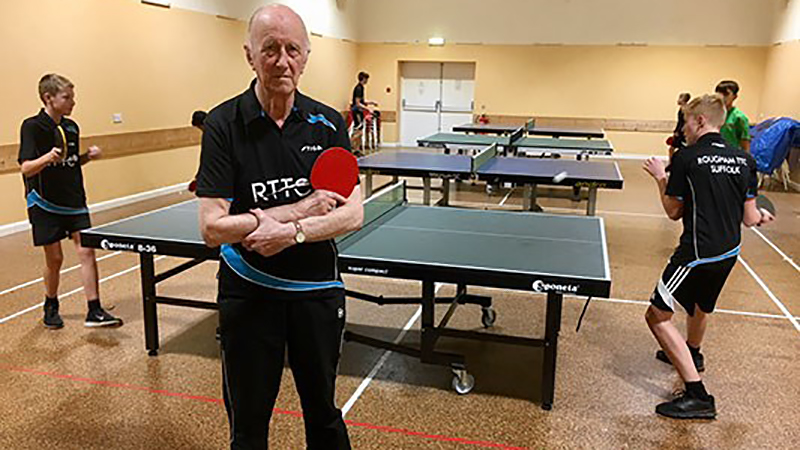 Maurice was introduced to table tennis by his father in February 1947. During his Draughtsman’s apprenticeship he played for a works team in Bishop’s Stortford Table Tennis League and as a teenager represented the team on the committee of that League during the early 1950s.

For the next few years, Maurice played table tennis in NAAFI canteens in the Army and Hoddesdon Table Tennis League in Hertfordshire.

Moving to Suffolk in 1965, he was involved in setting up a table tennis club at Beyton School with a team in the Stowmarket League.

1967 saw Maurice helping to set up the Bury St Edmunds and District Table Tennis League. He was chairman of the League from 1968 to 1973, and returned to the committee in 2003 for another eight years as coaching secretary.

In 1974 the Beyton club was shut down and its members joined the Thurston club, where Maurice was Chairman for a few years.

With the opening of Rougham Sports hall in 1994 Maurice took the opportunity to set up Rougham Table Tennis Club which is now in its 25th season. He also helped to set up the Bury St Edmunds Table Tennis Club in 1998 and acted as Secretary for nine years.

Maurice sat on the committee of the Suffolk County Table Tennis Association and managed the Suffolk Cadet and Junior teams for a number of seasons.

Maurice became interested in table tennis coaching in 1998 and currently holds a UKCC Level 2 coaching certificate. For several years he coached at after-school clubs at four schools in the Bury St Edmunds area.

Maurice now concentrates on coaching and administration at Rougham TTC. The club enter teams in the Bury St Edmunds Table Tennis League and the Table Tennis England National Junior and Cadet Leagues, which are held four times a year at Stowmarket.