Matthews and Karabardak through to knockouts

Thomas Matthews and Paul Karabardak made it a good morning for ParalympicsGB as they won their final group matches to make it through to the quarter-finals of the men’s class 1 and men’s class 6 singles respectively. 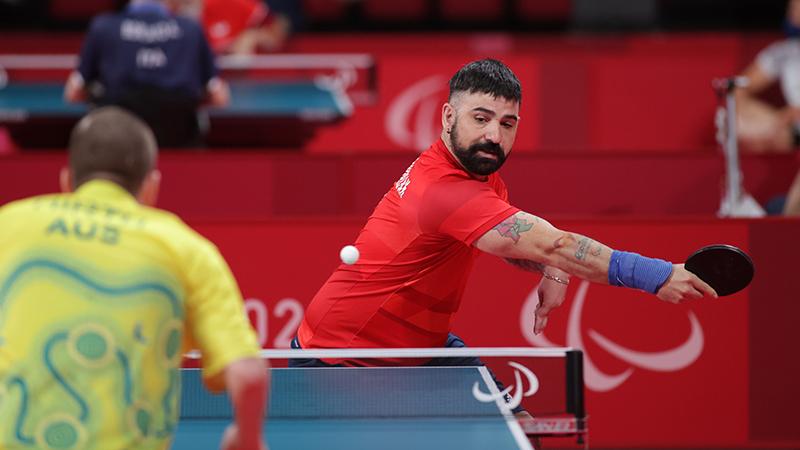 Thomas Matthews and Paul Karabardak made it a good morning for Wales as well as ParalympicsGB at the Tokyo Metropolitan Gymnasium as they won their final group matches to make it through to the quarter-finals of the men’s class 1 and men’s class 6 singles respectively.

On his Paralympic debut Matthews impressed when beating the Korean world No 3 Ki Won Nam yesterday and he faced the Russian Dmitry Lavrov today, who had claimed his place in Tokyo by winning the World Qualification Tournament in June.

Lavrov beat Matthews in the European Championships in 2019 but the Welshman won their most recent match at the Costa Brava Spanish Open in 2020 and he made a confident start, taking the first game 11-3. Lavrov came back to take the second 11-8 but Matthews then took control of the match and took the third game 11-5 and the fourth 11-6 to win the match 3-1.

“I’m very happy,” said the 29-year-old former mountain bike rider from Aberdare. “In the second set I came off for a bit and went a bit passive, but we readjusted that and came out on top and I’m really happy with the way I played and the way I was able to adjust through the sets. My coach Neil Robinson did really well and I’ve got to give credit to him for slowing me down and it’s working really well.”

Matthews goes into the knockout stages as group winner and will play his quarter-final later today.

“Obviously I want to go further and try to win a medal,” he admitted, “but realistically when I came out here, I thought ‘just win a match and do something’. I’m doing something right because I’m winning and I’m really enjoying my table tennis here and loving the moment.”

Karabardak also came into today on the back of a great performance in his first group match when he beat the world No 4 Bobi Simion from Romania. He consolidated that win by beating the Oceania champion Trevor Hirth from Australia 3-0 and as group winner goes straight through to the quarter-finals later today.

“He is quite tricky,” said Karabardak, “so it was quite a difficult game, but I thought I played quite well and had too much for him. I’m really pleased to have won the group because it is a really good feeling and gives me a good chance to do well in the next round now.

Day one: Wilson and McKibbin get wins on the board | Bayley starts defence with victory

Day two: Hunter-Spivey and Matthews impress | Trio through to quarter-finals