Maria makes step up in Greece

Maria Tsaptsinos is leading the way as her AEK Athens team steps into the top division of the Greek league. 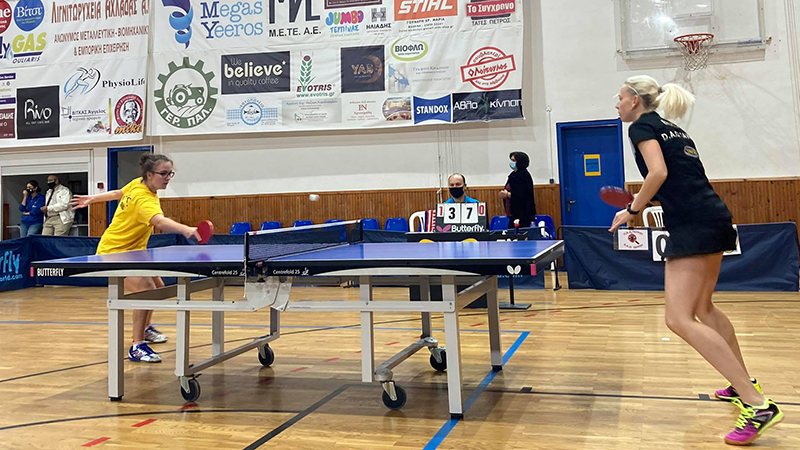 Maria Tsaptsinos is leading the way as her AEK Athens team steps into the top division of the Greek league.

The England No 2 has been with the club for several years and has been part of a rise from the third tier to the top level (A1), earning promotion from Division 2 last season.

Maria lined up in a squad including compatriot Emily Bolton, Anais Salpin of France and Roza Hovsepyan of Greece as AEK played their first round of matches at the weekend. Greek women’s singles champion Georgia Zavitsanou is also part of the squad for the season – a squad which Maria is also coaching from the bench.

They lost their first match 3-2 to Sarises Florinas and were then defeated 3-0 by reigning champions DAO Tavros, but ended on a high with a 3-0 win over Xanth.

That first match against Florina was particularly galling as Maria, playing the final match, led 2-0 as she looked to close out overall victory. The tie was her first competitive match since before lockdown – she was injured early in the year and missed the Mark Bates Ltd Nationals in March.

She said: “I had a 2-0 lead and I lost 3-2, so we lost that first match 3-2 overall. It felt awful. If we’d won that it would have been the first win ever for this team in A1, so it was even worse as I’d been with them for so long. It would have been great to win.

“I don’t really know what happened. I felt it was all in my head more than anything else. It was my first proper competitive match back since I was injured, but it didn’t actually feel that strange to play matches again.

“One of the team said to me ‘you haven’t played a competitive match for so long, so don’t be so hard on yourself’, but still it was annoying because if you have chances like that and you have a 2-0 lead, you want to win.”

Maria also had chances in the 3-0 defeat to Tavros as she played against Anamaria Erdelji of Serbia.

The final match did result in that landmark first win in the top flight to get AEK off the mark. The next set of fixtures is on November 21-22.

The Greek league is the only one Maria is playing in at present – she is unable to compete in the French league due to the quarantine period she would have to observe on returning to the UK, which would hamper her studies for a Masters degree in broadcast journalism at City, University of London.

But she was delighted to get back into action and said of the league: “This year compared to last year the standard is completely different. Last year was a much weaker league with fewer foreign players. This year there’s a lot more foreign players and some well-known names.

“They include Spain’s Galia Dvorak, the world No 78, and Christina Kallberg of Sweden, a top-200 player.

“It’s very, very competitive, which I was anticipating,” said Maria. “It’s a great league for people who play in two leagues because it’s only five weekends a season, so it attracts some good players.”