There was a massive entry of 82 for the Topspin Sports Horsham Spinners Cadet & Junior 2 Star, with two medals apiece for Ollie Maric-Murray and his brother Henry. 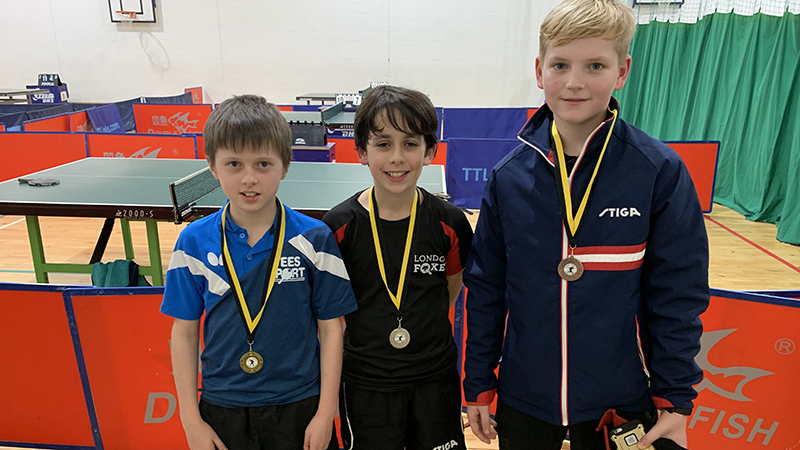 There was a massive entry of 82 for the Topspin Sports Horsham Spinners Cadet & Junior 2 Star, which took place at Farlington School, Horsham.

The first Sussex tournament under new sponsors, Topspin Sports, it was one of the largest entries ever for a tournament in Sussex. This made for a hectic schedule with about 300 matches being played over nine tables. It was a great day for the Maric-Murray family (Sy), with Ollie winning both the U12s and U13s at a canter and Henry being the runner-up in both the U15s and the U17s. Alex Ahl won both the U17s and the U18s.

There was a very large entry of 34 players in this age group. There were three upsets at the group stage with lower seeds losing to players ranked below them. No 4 seed, Louis Vaughan-Drake (Sx), was taken out by Noah Hacking (Mi) in four, No 7 seed Daniyal Palmer (Sy) was defeated by Max Radiven (Mi) also in four and No 8 seed, Sienna Jetha (Mi), was beaten by Kai Sun Yiu (Sy).

In Round 1, the success of both Radiven and Hacking continued, both getting 11-9 in the fifth game victories over No 5 seed, James Donald (E) and Jetha respectively, while Vaughan-Drake was eliminated by No 2 seed, Francesco Bonato (Sy).

In the semis Maric-Murray defeated Baig in three and Bonato defeated Yiu also in three. After an easy opening game in the final for Maric-Murray, he won the next two very closely. Baig won the bronze medal match in four. Zoltan Koszo (Mi) was the consolation winner, with a final victory over Ishay Haim (Mi) in four close games.

There was a huge entry of 45 players in this category and the U13s was the biggest event of the day. No 7 seed George Noel (Sy) was overcome 11-9 in the fifth game by William Saint (Bu) in the group. This proved a blessing in disguise for Noel, as he got to the semis, beating Matthew Davies (K) 3-0 and Jacob Archer (Sy) 11-8 in the fifth in the quarters to get there. Saint, on the other hand, lost in Round 1 in the fifth to Daniel Clark (Sy), who lost to top seed, Ollie Maric-Murray in the quarters in three.

Maric-Murray swept Nabarro aside in the semi in three and Bonato ended Noel’s run in four. For the second time in a final that day, Maric-Murray proved too strong for Bonato, winning in straight games. Nabarro conceded the third/fourth place match, so Noel got the bronze medal by default. The consolation was won by Rachael Iles (Bu), beating Hacking in four in the final.

This consisted of 24 players. In the quarters, No 1 seed, Joe Hunter (Mi) ousted Chotai in three, Noel overcame Nabarro 11-8 in the fifth, Octavian Aparaschivei (Mi) took out Clark in three and second seed, Victor Ramirez-Rioja (He) put out Ojasvii Borah (Sy) in three.

In the semis, Hunter defeated Noel in three and Ramirez-Rioja defeated Aparaschivei in five. Ramirez-Rioja went on to beat Hunter in the final 3-1. Aparaschivei won the bronze medal match 3-0. Archer beat Anna Piercey (Bk) in the consolation final 3-0.

19 players contested the U15s. All of the seeds came through the group stage unscathed. In the quarters top seed Mahmood Kelani (K) accounted for Daniel Titmas (Bk), Alfie Osborne (E) knocked out club-mate Akash Shah (E) and Hunter put out Carl Partridge (E). These three matches were all 3-0. The other quarter-final was a walkover for Henry Maric-Murray over Robert Ionascu (Mi), who had to leave early.

In the semis Kelani was too strong for Osborne, winning 3-0 and Hunter could not get to grips with Maric-Murray’s combination bat defensive style, also losing 3-0. The final was close and Kelani took the first two, before being pegged back to the decider and eventually winning it 11-9. Hunter won the bronze medal with an easy 3-0 win over Osborne. Billy Irvine (Sx) had a good fifth game win over Sasha O’Halloran (Sx) in the consolation final.

Ahl won confidently in the final 3-0. Ianau got the bronze medal, with a four-game win over Shaddel. Jacob Ling (E) beat Jay Chotai (Sy) in the consolation final in four.

There were just seven players in the U18s after some drop-outs. There weren’t any big surprises at the group stage. In the two quarter-finals, Trent Luton (E) beat club-mate Brightwell Yeboah (E) 11-9 in the fifth and McGlashan knocked out Ling in three.

Ahl beat Luton in three in the semi and McGlashan beat Shaddel in four. Ahl was again untroubled in the final, winning in straight games. Shaddel won the bronze medal at the expense of Luton, with a 3-0 win. There was no consolation event, due to the players pulling out, leaving just one player in the consolation.