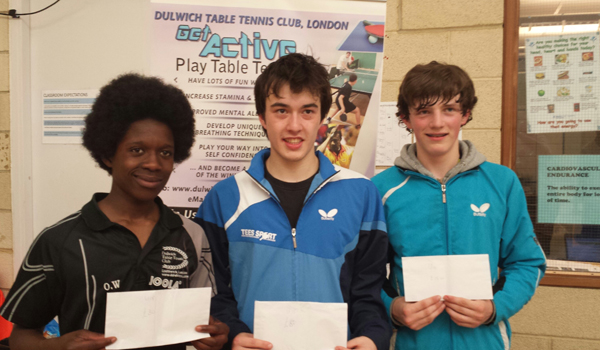 Magic McTiernan:
Thirty-seven players took part in the Tayo Situ Dulwich 2 Star on a very hot Saturday 6th July in Harris Girls School. There were cash prizes for the top three players in the U18s & U15s & trophies for U13s & U11s.

U11s:
This was a round robin of six players. Branislav Zivkovic (Mi) was the top dog, winning all five of his matches, including the higher ranked Jamie Liu (Bk). He only conceded one game in total and that was to Liu. Liu came second with four wins. He was made to work by third placed Michael Tunubu (Sy) of the host club, who took him to 11-6 in the fifth game. Naphong Boonyaprapa (Nk), who is surely the best under 8 player in the country, came fourth, only succumbing 11-9 in the fifth to Tunubu.

U13s:
This consisted of two groups of six players and one group of three. Top seed, Ben Foster (K) duly won his group of six, without dropping an end. Liu was the group runner-up. George Long (Mi) came third and also progressed to the main draw. Boonyaprapa was unlucky to again lose 11-9 in the fifth to Tunubu and by the same score to Long. Older brother, Naphat Boonyaprapa (Nk) performed well to top Group 2, beating the higher ranked George Coulson (He). Zivkovic defeated Coulson 11-8 in the decider to get the runners-up spot. Coulson just managed third place, with fifth set win over Jamie Rosen (Mi). Seb Volz won Group 3 and Lewis Stevens was runner-up.

In the quarter finals Foster took out Zivkovic, Long accounted for Stevens, Coulson put paid to Volz and in the closest of the four, Naphat Boonyaprapa knocked out Liu 11-9 in the fifth. Long was no match for Foster in the first semi and similarly Naphat overcame Coulson with ease. In the final, the lower ranked Boonyaprapa was first out of the blocks, winning the first two ends, but Foster weathered the storm and made a great comeback replete with fast and furious rallies to take the next three in style. Tunubu scraped a win over Rosen in the final of the consolation event 11-8 in the decider. 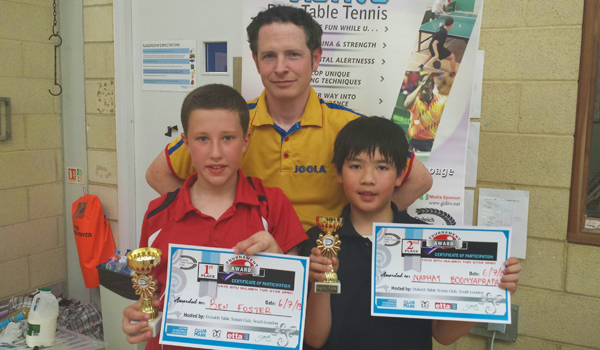 U15s:
This was a very strong event with 11 players over 500 ranking points out of the 20 entrants. There were five groups of four. Top seed Ryan Williams (E) won Group 1, but not comfortably. He dropped an end to Jake Michell (Sy) of the home club and then had a scare in his match vs Naphat Boonyaprapa, only winning 12-10 in the deciding game! Having won the group, Williams then pulled out of the tournament. Mitchell beat the higher ranked Boonyaprapa to go through to the main draw. In Group 2, the no. 2 seed (James Smith) pulled out ill on the day, leaving Ben Cawston (Ha) to take the group with ease. Andrew Chapman (Sy) came second. Jimmy Yeung (Ha) easily won Group 3 and Sam Liu (Bk) came second. Dulwich TTC player Olamide Wuraola (Sy), won Group 4, but group runner-up Josh Gallen (Bk) pushed him in a close four game match. The fifth and sixth highest ranked players battled it out in Group 5 and it was the lower ranked Foster, who overcame Shaquille-Webb-Dixon (Sy) of Dulwich TTC.

In the quarters Liu, who had beaten Chapman in the first round, progressed to the semi final, by virtue of a walkover vs. the absent Williams. Wuraola was too strong for Foster, Yeung had too much in the bag for Mitchell and Cawston had a cracking win over Webb-Dixon, who had ended Gallen’s run in Round 1. In the semis Wuraola overpowered Liu and Yeung completed a straight sets victory over surprise semi-finalist Cawston. The final was a rollercoaster ride, as both players took turns winning games, with Yeung triumphing in the end, winning 12-10, 7-11, 11-7, 8-11, 11-7. Cawston beat Liu for third place. In the Consolation final Stuart Herriott (Mi) beat Naphat 3-1.

U18s:
The Under 18s had 17 entries in four groups. The no. 1 seed was Liam McTiernan (Bk), who was recently crowned the 2013 Senior Schools International U18s Boys Winner. As expected he won his group without dropping a game. Gallen beat the higher ranked Cawston, to go through to the main draw. In Group 2, Yeung came out on top and Sam Liu grabbed second place with an 11-6 in the fifth victory over Mitchell, who is ranked higher. Group 3 was an all Dulwich TTC group with Wuraola and Geme Ryder finishing first and second respectively, as to be expected. The fourth and final group saw a mini upset, with Webb-Dixon beating the slightly higher ranked fourth seed, Lucas Papantoniou (Mi).

The quarter final matches were all 3-0 and three went with ranking (McTiernan beat Liu, Webb-Dixon beat Ryder, Wuraola beat Papantoniou), the exception being that Gallen, achieved a stupendous win over Yeung, the second seed and earlier winner of the U15. This is a maximum win, as Yeung is ranked 535 points above Gallen in U18s. McTiernan came under a little pressure for the first time in the semi final Vs Webb-Dixon, who won the first game and led in the second. McTiernan came back, won the second 12-10 and won the fourth by the same score to progress to the final. Wuraola beat Gallen in four games to join McTiernan. McTiernan left nothing to chance in the final, winning 3-0. Gallen picked up his third unexpected win of the event, by defeating Webb-Dixon 3-0 in the third/fourth place play-off. Cawston made up for his group defeats, by winning the consolation event without dropping an end, overcoming Mitchell in the final.

Key Stage Events:
In addition to the 2 star events, there were also two non-ranking events staged for the less experienced and mostly local players. In the Key Stage 2 event for primary school players, there was a group of six players, which was won by Tin-Chi Ivan Wong, with Lewis Stevens coming second. The Key Stage 3/4 event for secondary school pupils consisted of 13 players across two groups. The final was won by Kangmin Heo over Horsham Spinners player, Matteo Galeazzi-Everett (Sx). James Tse won the battle for third place vs Imran Sharifi. Certificates were provided to all key stage players.