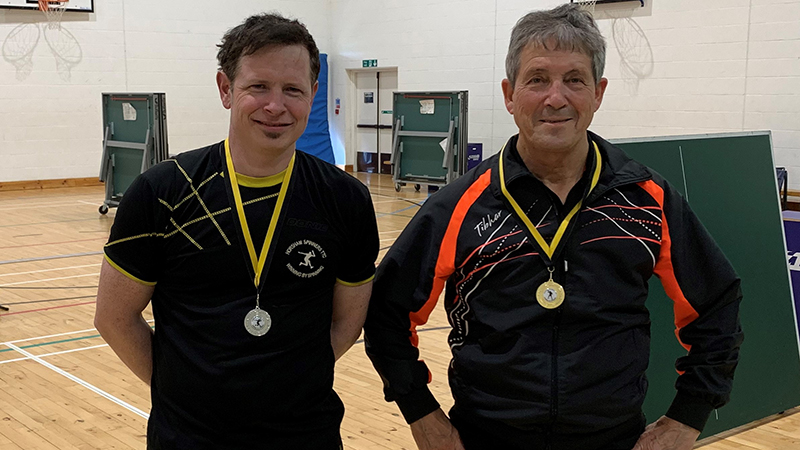 There were eight players in the seniors and nine in the vets, in round-robin groups, so everyone got seven or eight matches, except the three keen players who took part in both vets and seniors and therefore played 15 matches on the day.

No 1 seed, Rory Scott (IRL) made the dubious decision to play all of his matches with his ‘Martin Gunn-style hard bat’. This worked well for the most part, as he won all of his senior matches and won all bar one in the veterans. The one that escaped him was against winner Bob Lowe (Sx), who came back from 6-10 down in the fifth to inflict the only defeat of the day on Scott. Henry Arthur (CU) ably refereed the event.

As mentioned, Scott won all of his matches, but not with ease, as he conceded four ends. Two of these were against second seed, Alan Taylor (K), who led 2-1 in games and put a lot of pressure on Scott. In particular there was one rally where Scott had to hit at least 10 good backhand drives in a row to eventually win the point. The first four games were close, but Scott broke away in the fifth after the change of ends.

Taylor won five matches all 3-0 but was taken the distance to five games by Mina Matta (Sx). Jozef Krakovsky (Sx) won five matches and came third. He beat both Philip Digby (Sx) and Ben Lerman (Ha) in the fifth game and won his others in straight sets.

Matta finished in fourth place, with three wins. Digby also won thrice, but finished fifth, due to losing to Matta. Stephen Nelson-Smith (Ha) lost to Matta by the strange score of 11-0 in the fifth end after four well contested games. He and Lerman both won twice, but since he gave one walkover, due to needing to leave, he scored one less group point than Lerman, so Lerman was seventh and Nelson-Smith eighth.

Two group points are awarded for a win, one group point for a loss and zero group points for a concession. Lerman actually had five five-setters (out of seven matches), losing in five to Digby, Nelson-Smith and Krakovsky and defeating Matta and Darius Mayhew (Sx) in five.

Lowe was the vets winner. As well as defeating Scott, by grasping victory from the jaws of defeat, he won his remaining seven matches for the loss of just two ends. Runner-up Scott won seven times, conceding three further games.

Tom Kinga (Sx) excelled to win six matches and finished in a very respectable third place. He defeated former team-mate Liam Cuffe (Sx) 12-10 in the fifth in their opening match.

Nelson-Smith got five wins and was fourth overall. His first match was a marathon vs Alison Jordan (Sx), which he took 13-11 in the fifth. Cuffe won four matches to finish fifth.

Three players won two matches each: Colin Barham, Digby and Jordan. In a count-back between three players, you only consider the results between the three players involved and since Barham beat both of the others, he came sixth, while Digby overcame Jordan, he was seventh and Jordan eighth. Digby was involved in two five-setters, winning vs Jordan & losing vs Barham.