Loughborough defended their Bromfield Trophy title and Plymouth won a medal in all four sections at the English Leagues Cup Competitions finals. 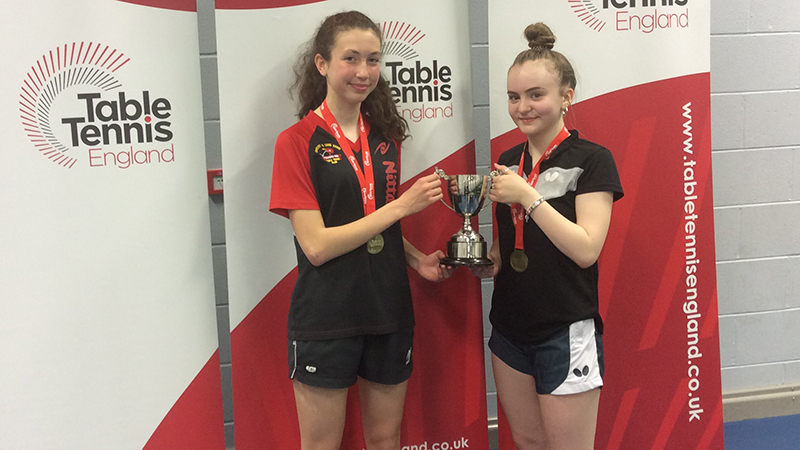 Loughborough defended their Bromfield Trophy title and Plymouth won a medal in all four sections at the English Leagues Cup Competitions finals.

Plymouth’s success in winning one gold, one silver and two bronzes is believed to be a unique achievement, with bronze medals a relatively recent addition since the advent of positional play-offs.

The players representing their leagues qualified for the finals at Westfield TTC in Wellingborough having won through zonal qualifying stages. Group matches were played before the final knockout matches to decide champions and positions.

Photos by Richard B Hudson.

North Herts were winners in the final against Leeds as Adam Nutland, Ethan Walsh and Jimmy Walsh were too strong for the Leeds players Mike Fraser, Shahriar Masoudi and Simon Noutch, winning 3-0.

Nottingham’s team of brothers Harry and Max Stevens were victorious in the final, beating Liverpool’s Rhys Davies and Ogi Kirstov 3-2 in another fine match.

In a round-robin of the four teams, Loughborough retained their title when Helena Dicken and Erin Green won 4-1 against Plymouth’s Mari Baldwin and Emily Haskell, who finished second.

Many thanks to the competition team of referees, organisers, umpires, local helpers and Table Tennis England staff.

Membership fees help us fund vital work at a grassroots level in this sport, including contributing towards the cost of competitions, which members of all ages and abilities compete in every season.

Even if you do not partake in these competitions, they are a big part of the Governing Body’s remit and are important for the future health and growth of the sport.

That’s why we say that when you buy a membership with us you become more than a player – you become part of a bigger picture. To find out how affiliation fees support you and the sport you love, click here.