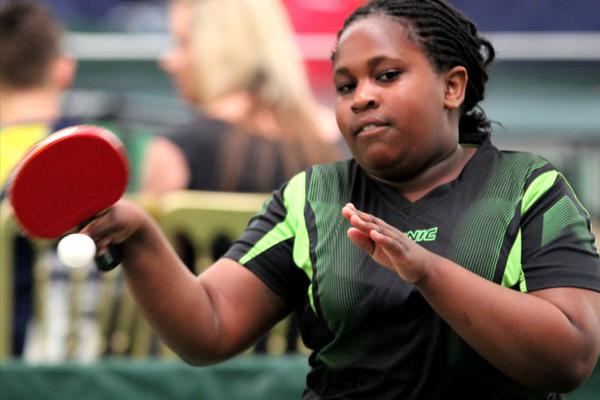 A Win for Windram:
The U18s Boys had 38 entries. At the group stage, third seed Charlie Austen (London Academy) lost to Josh De Cairos (Burlington Danes). However Curtis Welsh (Capital City Academy) beat De Cairos and Austen went out on countback. He did make amends though by winning the consolation event with wins over Claudiu Andrei (CCA) in the semi and Owen Scully (Bushy) in the final. That was the only major upset in the group stages. With the no. one seed pulling out, 8th seed Jack Merton (Fusion) made it to the semi final, where he met 6th seed, Jack Josephs (LA), who had put out no. 4 seed Dan Pound (Horsham) in the quarters. Josephs won 11-8 in the fifth, having lost the first two games. On the other half of the draw, fifth seed Tom Windram (Fusion) made it to the semis by the skin of his teeth, defeating Welsh 9 in the fifth. 7th seed, Mitchell Jones (LA) also had a toughie vs 4th seed Micah Salmon (CCA) in the quarters, coming through 7 in the fifth. Windram beat Jones in the semi in four games and went on to win the final in three close games 3-0 (11-7, 14-12, 12-10).

Williams Shows Will to Win:
The largest event was the Boys U15s with 43 players. Seven of the top eight seeds made it to the quarters. The remaining space was taken by 9th seed, Daniel Nwafor (BD). The quarters all went in favour of the higher ranked players. Top seed, Ryan Williams (Ellenborough) knocked out Nathaniel Nwafor (BD), Merton accounted for Chris Clifford (Barnet) and Windram took out Daniel Nwafor. However 3rd seed James Smith only just beat Arbi Tola (LA) in the decider. The semis both went the distance, with Williams coming back from dropping two deuce sets to win and second seed Windram scraping through 9 in the fifth vs Smith. Williams won the final 3-0 (11-8, 11-8, 12-10). Maxwell Allen (Fusion) won the consolation event in a close five-gamer vs Shayan Naserbakht (LA).

Smooth Smith:
24 players contested the Boys U13s and the quarter final results were as follows, with the top four seeds all making it to the semis: Smith defeated George Coulson (Ellenborough), Nathaniel Nwafor got the better of Eren Gozcu (LA), Sam Wilson (Cippenham) was too strong for Pavle Svrdlin (CCA) and Reiss Vydelingum (Fusion) defeated Theo Achampong (LA). In the semis top seed Smith won in four vs Nwafor and third seed Wilson steamrollered second seed Vydelingum. The final was a fantastic showcase for table tennis. Wilson with his newly adopted defensive style (long pimples on the backhand & short pimples on the forehand) took the lead in all five games, showing impressive patience in defending 90% of the time. Smith seemed to peg him back in every game, although Wilson nicked the first two 12-10 to take a commanding lead. In the third, Wilson was perhaps a little less patient, maybe seeing the finish line and lost 11-5. Throughout the match the rallies were immense and crowd-pleasing, with both young players showing great determination and patience. However someone had to win and Smith appeared just that little bit calmer at the business end of the match, as he shaded games four and five both 11-9. Kai Ghazi-Timms (LA) won the consolation at the expense of Alfie Little (LA) by 11-9 in the fifth.

Chan in Charge:
The Boys U11s was a round robin of seven players and top seed Jaycee Chan (Ellenborough) won all six of his encounters. His closest contest was vs fifth placed Kotaro Lam, which went to five. Kai Ghazi-Timms was the runner-up with five wins. He was pushed to five games by third placed Ben Mencer (LA).

Terrific Tiana:
U13s Girls had 11 players. Top seed Dennison won the event without dropping an end, knocking out Talia Banin-Reid (Barnet) in the quarters, O’Neil in the semis & Uy in the final. Uy had beaten Gorniak in the quarters and Menghistab in the semi.