The drama began for the England junior in the group stage where he was pushed to the full distance in just his second match of the day against Alex Forshaw. Perhaps tired from his early morning start, Lawrence was almost caught napping when Surrey player Forshaw nearly surprised him in a 3-2 (8-11, 11-7, 9-11, 11-6, 11-9) defeat.

Having escaped his group in top spot, the third seed faced another stern test in the form of Adam Harrison, who battled through four ends in a feisty affair during their quarter-final.

It was action-packed from the beginning, any element of luck for either player causing a stern look of criticism from across the table, while the duo played out some high-calibre table tennis in Lawrence’s 3-1 (11-9, 15-13, 9-11, 11-8) win.

After such a tight match it was a real surprise that the Kent youngster then rushed through a one-sided semi-final with Adam Nutland (3-0) to set up a final meeting with Sam Mabey.

In a similarly dramatic final, Lawrence and Mabey traded blows in the first four games to set up a classic and tense title-deciding end.

Mabey made the early running with a dominant 5-0 lead but Lawrence incredibly fought back to set up two match points at 10-8. However, once Mabey turned it around to lead 11-10, it took every ounce of the Kent players skill, and nerve, to scrape through a dramatic 13-11 game.

Women’s Band 1
Yolanda King made it a Weald double as she raced to the Women’s Band 1 title,  stopping Durham University student Clara Chau in her tracks, to join Daniel Lawrence as a Bribar Nottingham Grand Prix Champion from the South East coast.

The top seed was at her belligerent best from the start and wasted no time in cruising through her group in three 3-0 victories.

Chau had previously been unbeaten after winning the morning’s band 2 event but had to settle for a runners-up spot after wins over Janay Gibson (3-1) and Jas Ould (3-0) helped her to make the final.

Men’s Band 2
Nicolas Leung knocked out both of the top seeds en route to an excellent Band 2 title at the Bribar Nottingham Grand Prix.

London-based Leung was in inspired form all day, beginning by controlling his group, before extending his run to stroll past both Mike Fraser and Kieran Smith in straight games to make the semi-final meeting with top seed Sam Mabey.

Leung, in unstoppable form at this point, made sure of his title with another high-class performance against England junior Marcus Giles in a four game final. Giles had earlier come through a big test of his own in his quarter-final against Alex Forshaw 3-2 (11-8, 11-7, 9-11, 6-11, 11-7). 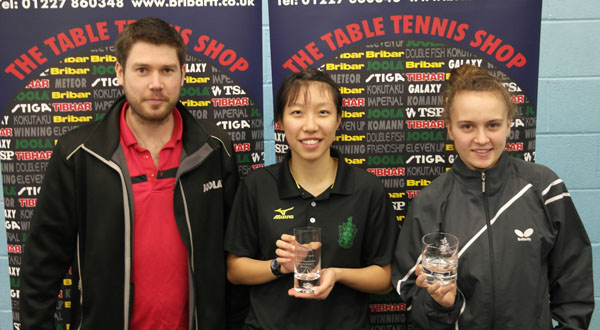 The passionate youngster, who already has one band 2 title to her name this season, also made the final after consecutive 3-0 victories over Joanna Roberts and Lois Peake but she found a much bigger hurdle in the form of Chau in the last stage.

Although she twice led, Tsaptsinos was unable to prevent a Chau fightback as she sent her support group away happy with an 11-9 final game to seal the title – much to the annoyance of a frustrated Tsaptsinos. 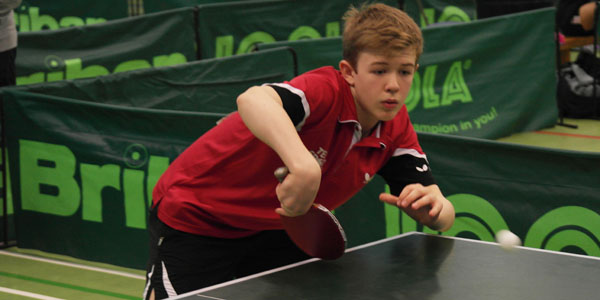 Men’s Band 3
England’s No.1 cadet, Tom Jarvis, pulled no punches as he strolled to the Men’s Band 3 title on his senior debut at a Grand Prix event.

Promoted from the Band 6 earlier in the morning, as his cadet and junior points do not give him a senior rating, he began by winning group eight, dropping just one game in the process.

From there he embarked on a long knockout run against Craig Feargrieve, Alex Ramsden, and Ryan Fellows before he met training partner Marco Tang for the second time in the day.

However, Dempsey made a great fight of the final and took the third game off the youth international before finally succumbing to a 3-1 defeat.

Heyi Chen easily progressed through her three-player group but rival Lebedva had a titanic battle despite just facing the one opponent in group 2. She scraped past an in-form Beth Farnworth 3-2 (4-11, 11-7, 7-11, 13-11, 11-3) to win her group and set up a quarter-final with Lucy Elliott.

She defeated the Scot in three before beating Paulina Orzechowska in four to make the final. However, despite a couple of incredibly closely fought games, including an opening 20-18 monster, the ‘home’ player was unable to prevent Chen from securing the Nottingham prize.

Men’s Band 4
Jac Jenkins continued his good form this season with his second Band 4 title, following a maiden success in Guildford, to keep his chase at the top of the standings on track.

The Welsh youngster once again had a long route to the final but accomplished his task after a number of fine performances, none more so than when he beat the top seed Noor Owadally in the semi-final.

Women’s Band 4
Bethany Farnworth won the ‘battle of the Beths’ at the Bribar Nottingham Grand Prix as she beat off namesakes Beth Cook and Beth Priest in a bizarre semi-final line-up.

After winning her group comfortably she maintained her form to progress to the final by beating Cook 3-0 (11-8, 11-8, 11-8). Rather than meeting Priest in the final, however, she met Lisa Lewis who broke the ‘Beth’ domination over Band 4.

At the final hurdle it was Farnworth who cemented her incredible form by not dropping a single game throughout the entire event – completing a successful run with a one-sided 3-0 (11-5, 11-6, 11-6) final.

Men’s Band 5
Typically of any final match of the day, the Men’s Band 5 final between David Tang and Zongyang Li went the full distance in front of a weary crowd at the Jubilee Sports Centre.

Tang, a student from Durham University, and Li, from Southampton, were well supported by their peers late on Saturday night and they duly produced a fine final to reward their fans’ patience.

Tang, who lost to impressive 11-year-old Shayan Siraj in his group, went the long route through the knockout stages, beating Boguslaw Okonek, Gary Whyman, Matthew Webster and Jonny Higgins to make the final while Li had an equally tough route past Mina Saweres, Damian Galko, Jesse Kendrick-Hall and finally Siraj 3-2 (11-6, 12-14, 9-11, 12-10, 11-1).

It was the Durham student who started the final well, leading 2-0, but Li fought back to take the match to a deciding end. It looked like Li was in control at 6-3 up, but eight unanswered points from Tang gave him the final victory of the day.

Men’s Band 6
Tom Jarvis and Marco Tang contested one of the highest class Men’s Band 6 finals seen on the Grand Prix circuit with both players well below their ability level.

Their meeting was chance, Tang and Jarvis both without a ‘proper’ senior ranking for their Grand Prix appearance meaning that they were forced to enter into the lowest band on Saturday morning.

Unsurprisingly neither player suffered any shocks en route to the final, Tang dropping just one game to Jonny Higgins in the knockout stage while Jarvis’ record remained unblemished.

When the training partners finally met they produced a massively topsy-turvey beginning with Jarvis winning the first game 11-1, before Tang replying 11-4 and 11-1. Their rallies settled down after that and, following consecutive 11-9 games, the English No. 1 cadet won through a brilliant match at the Jubilee Sports Centre in Nottingham.