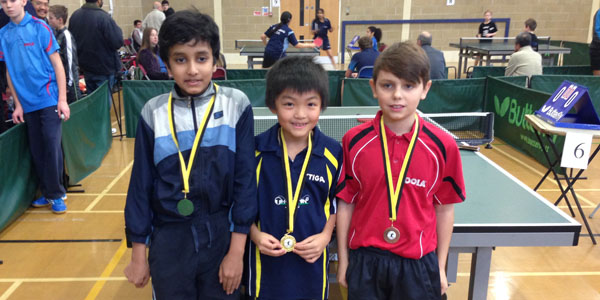 Boys U11s:
Top seed Jamie Liu (Bk) dominated this event, easily beating Harry Boston (Ca) in the semi-final and then won 3-1 in the final vs second seed, Chamika Weerasinghe (K). Weerasinghe had beaten Nikit Sajiv (Sy) in straight sets in the other semi. Boston beat Sajiv 11-4 in the decider in the third place play-off to get the bronze. Louis Price (Dv) won the consolation final vs Harry Filson (Sx). 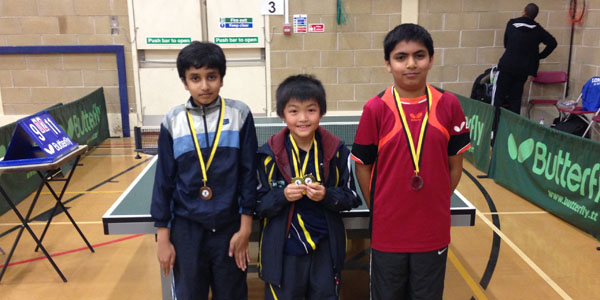 Boys U13s:
In the U13s Liu picked up from where he left off and this time even more impressively, won the event without conceding an end. In the quarters he defeated Ryan Darwen (Sx), before beating Weerasinghe again in the semi. His final opponent was Yaj Vashee (Ha), who had knocked out the no. 1 seed, Harry Nicholls (Co) by 11-8 in the fifth set. Weerasinghe took third place by default, as Nicholls had to leave. Thomas Arnott (K) turned the tables in the consolation final, by beating Louis Zanden (Sx), whom he had lost to in the group. 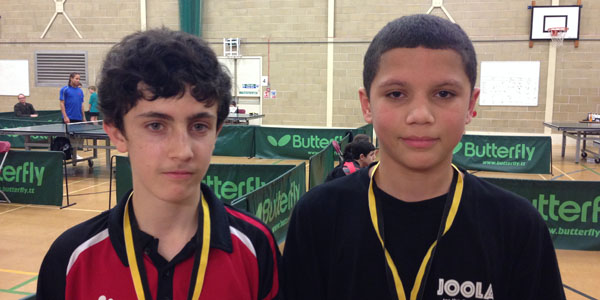 Boys U15s:
Romayne Stewart (Mi) was the top seed for this event and he lived up to expectations, by taking the gold medal. He beat his three knockout opponents all in four games, Dexter Sherin (Sx), James Corner (Mi) and Jay Ghazi-Timms (Mi) in the final. Ghazi-Timms had reached the final with knockout wins over George Long (Mi) and second seed Artur Caltabiano (Ha). Caltabiano won the bronze medal match vs Corner. Vashee was too strong for Teddy Sonin (Mi) in the consolation final. 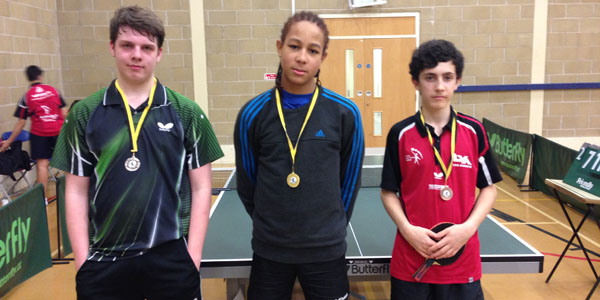 Boys U18s:
This was again won by the top seed, Shaquille Webb-Dixon (Sy), who beat club-mates Gem Ryder and Jake Mitchell (both Sy) on the way to the final. Ryder extended him to five games before losing 11-4 in the decider. However unseeded Ghazi-Timms, having lost to fourth seed Mitchell in the group, then over came Jermaine Fearon (E) and second seed Artur Caltabiano (Ha) in the quarters, before losing 11-9 in the fifth to third seed, Daniel Pound (Sx). The final was another five-setter, with Pound going 2-1 up in games, before being pegged back 11-8, 11-7 in games four and five. Unsurprisingly the bronze medal match was another close one, with Ghazi-Timms getting revenge on Mitchell 7 in the fifth. In the consolation event Richard Pelc (Sy) beat Andrew Jackson (Sy) in straight sets in the final. 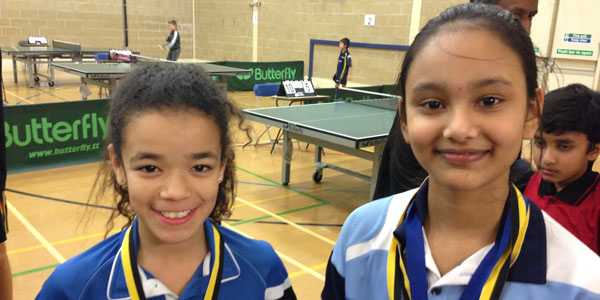 Girls U15s:
Isabelle Joubeily (Sy) was the comfortable winner of this event, beating Jemma Walker (Bu) in the semi-final and Juliette Moussarie (Sy) in the final. However Moussarie had caused a mini-upset in the other semi, beating no. 2 seed Shristi Ghosh (Bu) 12-10 in the fifth. Ghosh won the third place play-off. Megan Ashfield (Bu) beat Charlotte Boston (Ca) in the consolation final. 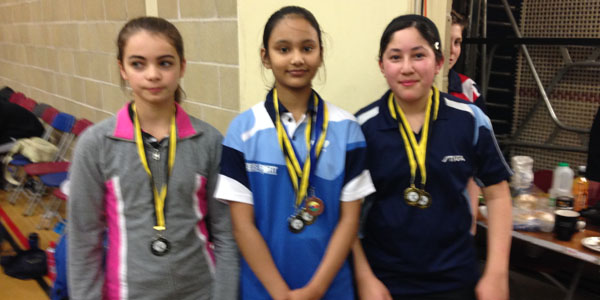 Girls U18s:
In the U18s, again Joubeily was not challenged. In fact all of the nine matches she played on the day were straight set victories for her, which was very impressive. This time she beat Moussarie in the semi final and Ghosh in the final. Ghosh had knocked out Walker in the other semi. Rutna Vashee (Ha) won the consolation final at the expense of Ruth Marsden (K).