Historic success for Liam Pitchford and Paul Drinkhall before the effects of the pandemic struck . . . part one of our review of 2020. 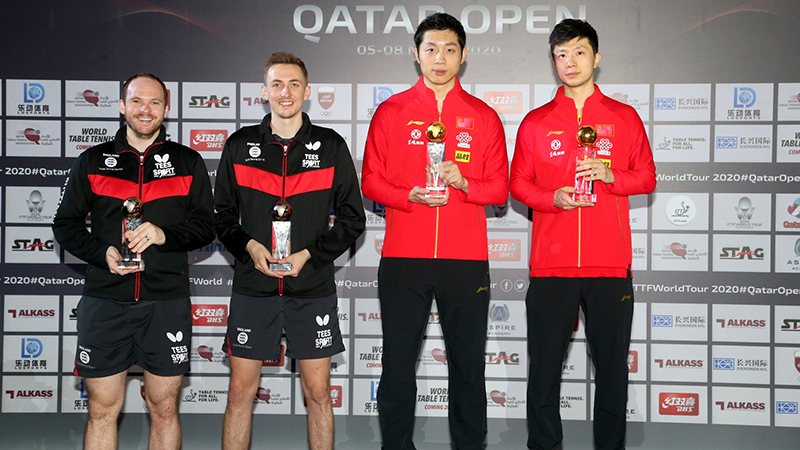 Back at the start of the year, as a new coronavirus emerged in the Chinese city of Wuhan, who could have predicted the global ramifications it would have?

It was business as usual in the first two months of the year, before the pandemic began to take hold and table tennis, in common with the rest of the world, was effectively shut down.

Here, we take a look back at the first six months of 2020 – when our leading men Liam Pitchford and Paul Drinkhall made British table tennis history at the Qatar Open.

At the tournament in March, they became the first Brits to reach a World Tour doubles final, going down 3-1 to Chinese greats Ma Long & Xu Xin.

Liam then beat the World No 1 Xu Xin in the singles semi-finals to reach his first World Tour Final, and the first by a Brit at a Platinum event. He battled hard against China’s Fan Zhendong, losing 4-2, and afterwards spoke about the “massive step” for his career.

Liam had started the year by being part of the ITTF 2019 showreel, for his stunning behind-the-back shots against Jun Mizutani, and he continued spreading some inspiration at the Jack Petchey Schools Team Finals and, alongside Paul and their England team-mate Tom Jarvis, at a TT Kidz session in Nottingham.

On the table, things did not go as planned as both the GB men’s team and the GB women were knocked out of the Olympic Team Qualifying Tournament and therefore missed out on Tokyo 2020.

There was better news for London 2012 Olympian Andrew Baggaley who, on a dramatic sudden-death championship point, retained his World Championship of Ping Pong title, lifting the trophy for a record fourth time.

There was an international gold medal for Bournemouth-based Sophie Barcsai at the Hungarian Cadet Open, where she was representing the host nation.

There were also two big developments off the table – it was announced that a series of top table tennis events will feature on a new online streaming platform, GB Sport, while family insurance company Mark Bates Ltd became sponsors of the National Championships series after signing a five-year deal with Table Tennis England.

England’s No 1 Pitchford was running into form, and it showed as he later reached the semi-finals of the Hungarian Open. Meanwhile, No 2 Drinkhall was also looking good, reaching the quarter-finals of the Portugal Open.

They weren’t the only English players enjoying success on the international scene – there were medals too in the junior and para ranks.

Josh Stacey improved his chances of qualification for the Tokyo Paralympics by winning gold in the men’s class 9 singles at the Polish Para Open, while at the same event, Martin Perry won team gold alongside Italy’s Matteo Parenzan.

Jasmin Wong teamed up with Anna Hursey of Wales to win bronze in the Junior Girls Doubles at the Swedish Junior & Cadet Open.

The newly-named Mark Bates Ltd National Championships straddled February and March, and there was a boost pre-tournament as the sponsor increased the prize money by 25%.

Off the tables, spectators enjoyed an enhanced experience at the event, including real-time score updates.

On the tables, Denise Payet and Luke Savill were the first champions, in the Under-21 events, followed by Sam Walker & Tin-Tin Ho in the Mixed Doubles.

And there was the chance for our top volunteers to share centre stage with the champions as we presented our Pride of Table Tennis Awards to the winners.

Also this month, there was delight for Brighton TTC, which cemented its status as an inspiring club by winning a prestigious award – the club was named winner of the Community Engagement Award at the 2020 Community Sport and Recreation Awards.

A 24-hour table tennis marathon at the BBC headquarters in Manchester raised more than £1,500 for Sport Relief – with some big names from the sport joining in.

And Table Tennis England Board member Doug Livingstone became a champion for ending the stigma of mental ill-health in the workplace.

Back on the table, Ackworth School were double champions at the Butterfly School Team Championships – but who would have imagined at the time that it would be the last big domestic table tennis event to be held in 2020?

As the world got to grips with the effects of the pandemic, the sporting landscape took on a very different complexion. The ‘new normal’ saw all of us make adjustments – and members of the table tennis family were soon showing their creativity and adaptability, as well as reaching out to help people across our own community and beyond.

World Table Tennis Day in April was one of the first events to go online, with the creation of a ‘world’s longest rally’ video involving people all over the world.

As people adjusted to spending more time at home, there was an upsurge in people ordering table tennis equipment to play at home, as covered by the BBC and Sky Sports News, among others.

Meanwhile, Table Tennis England Technical Director Alan Cooke became our sport’s version of Joe Wicks as he put together a table tennis-specific fitness routine to help keep our members in trim and ready for a return to play.

Brothers Sam and Joseph Cooper raised more than £5,000 for charity with a 24-hour table tennis marathon, and our No 1 female player Tin-Tin Ho showed how multi-talented she is by composing and performing her own lockdown song.

There was still news from the performance arena – Liam Pitchford’s stellar display at the Qatar Open saw him climb back into the world’s top 15 before the rankings were frozen. And Jenny Sanders and Jo Outhwaite joined the global ranks of officials after passing their International Umpire exams.

Megan Jones pounded the streets to raise money for Mind, and Bethany Ellis received some unexpected support with her efforts for Cancer Research UK from none other than world heavyweight champion Tyson Fury.

Paralympic champion Will Bayley was also on the fundraising trail, launching a range of facemasks in aid of Great Ormond Street Hospital.

Table Tennis England started work with Rackets Cubed to introduce table tennis to young people in some of the most deprived areas of the country.

And Table tennis personality Dan Ives went through the pain barrier and broke a world record to raise money for the NHS.

Keeping the European theme, table tennis was confirmed as part of the multi-sport European Championships in 2022.

And there was the heart-warming tale of how 15-year-old Mari Baldwin, who reached the women’s singles final at the Nationals at the start of March, is inspiring her mascot from that day, Jemima Choudhury, to work hard to emulate her.