Jane Li of Tollgate became the youngest ever Colchester Ladies Champion and in doing so completed a unique treble of titles of Cadet (U15), Junior (U18) and Senior at this weekend’s Colchester & District Table Tennis League Tournament held at the Holmwood House School Sports Hall.

Jane is the first person to achieve this feat and to add to the list she also won the Junior Doubles! Her opponent in the ladies Final was Aimee Sparkes of Gt Horkesley who had won on the last four occasions and as expected the final was a close, five set roller coaster. Li took the first set with Sparkes coming back strongly to take the next two ends. Li commented: “Aimee’s strong forehand loops were causing me problems so I tried to attack more down the backhand wing which slowly worked giving me more confidence after a nervy start.”

The shot that personified this was at game point to Li in the fourth when she crashed a forehand counter-hit passed a surprised Sparkes. Li continued: “I carried this tactic into the final end as I knew this was my last chance to compete in all three events!” Jane took the title in fine style winning all twelve of her singles across the three events. She won the Cadets on the Saturday as well as the Junior Girls with runners-up Sam Hume (St James) and Gracie Edwards (H20 Rowhedge) respectively. To add to her silverware she completed a memorable weekend teaming up with Tollesbury’s Ben Page to beat favourites Jermaine Fearon and Josh Sidki.

The Men’s final was no less exiting, in fact it was the seventh consecutive time that the title has gone the full, five set distance, each time producing a different winner! Defending champion Keiran Lally was up against twice Ipswich Men’s winner Jake Collins, ranked 72 in England. He had recently undergone eye surgery and following the loss of the first set was forced to apply eye drops before returning to take the second end.

The sheer acceleration of Collins’ forehand with very little back-lift was impressive as earlier against Andy Warner he incredibly switched hands during a rally to play a left handed chop with aplomb, winning the rally! He moved through the gears to take the third end but Lally struck back in the fourth in his words “struggling to find his rhythm” as Collins had failed to let him settle. However, the trademark ‘head-roll’ loops were in evidence and the crowd waited with bated breath for the final set.

This proved something of an anti-climax as Collins opened up a 6-0 lead that Lally could not overcome as Collins ran out a worthy winner -9, 6, 7, -10, 2. Collins commented: “I just got a good start in the last end and hang on by keeping it tight (with short pushes) and getting in before Keiran with my forehand when possible.

Earlier Collins was fortunate to survive a huge offensive onslaught from Jermaine Fearon who opened up a two sets lead with his ‘swashbuckling’ forehand before Collins slowly fought his way back to level the match. Fearon was not finished and led 10-6 in the final set but Collins used all his considerable tournament experience to come out on top 12-10 in the first knock-out round. This was arguably the best match of the weekend. Collins went on to take out Andy Warner in three straight in the semi-final as Lally accounted for James Denyer (St James) in four ends at the same stage having beaten Greg Green in a close five-setter in the quarter-finals.

Lally teamed up with Greg Green to beat Tollgate Club mates Andy Warner and Nigel Hodder in the Men’s Doubles in three straight sets. The younger pairing have never been beaten since joining forces two years ago and only dropped one set in this year’s retention of their title.

Gill Locke (St James) and Annabelle Rodriguez (Tollgate) were beaten by the scratch pairing of Aimee Sparkes and Lilo Roesch (University of Essex) for whom both their original partners withdrew from the weekend due  to the flu virus in the Ladies Doubles to win another close five-set encounter on the night.

The Mixed Doubles went the way of the Ipswich pairing of Aimee Sparkes and Jake Collins who beat holders for the past two years Gill Locke and James Denyer.

Andy Warner won the Veteran’s 40+ title for the first time defeating doubles partner Nigel Hodder in the most entertaining match of the evening with Hodder running out of steam, the aggressor and Warner, the defender standing firm from the back. Charlie Fulcher (Tollgate) retained the Vets 50+ beating a spirited John Andrews (H20 Rowhedge) whilst Ian Whiteside (Pegasus) also retained the 60+ event defeating Fred Button (H20 Rowhedge).

Jermaine Fearon capped a good weekend beating compatriot Josh Sidki in the Junior Singles final, the pair the most improved players in the league without doubt and now playing in British League for Survey Initiative Rowhedge. 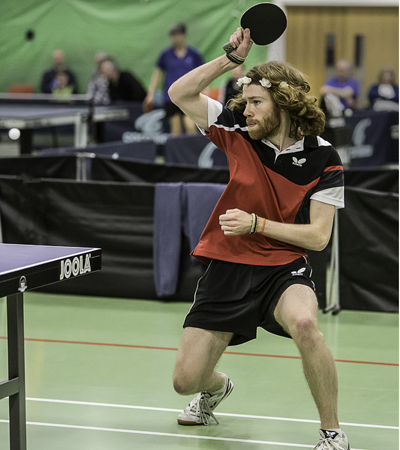 There was a star-studded line-up of Essex aficionados in the audience including Essex Chairman Ken Field, BATTS supremo Neil Brierley and Essex and Chelmsford stalwart Arthur Clark.