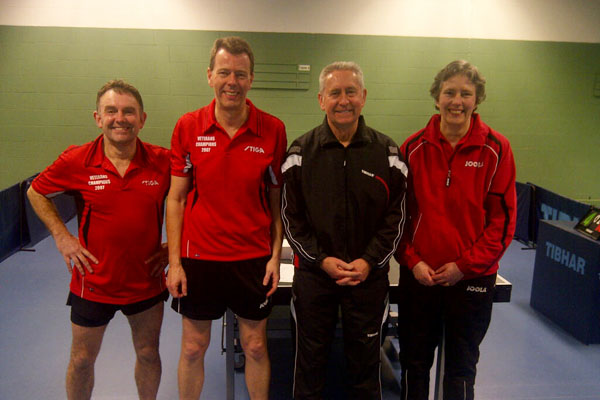 Leicestershire veterans’ first team regained the County Championship Premier Division after a thrilling weekend’s play at Draycott and Long Eaton TTC. The division went down to the final match which was still being played long after all other teams had gone; it featured Leicestershire and their decade long nemesis Yorkshire who both entered the match with a chance of winning the title.

At the start of the last round of matches Yorkshire led the division on 11 points with Leicestershire and Sussex one point behind on 10. With Sussex having an inferior sets difference to Yorkshire, the White Rose county needed a draw to retain the title as their sets could not be matched by Sussex.

Simon Pugh started brightly for Yorkshire and took the opening game against Leicestershire skipper Chris Rogers 12-10 but it was Rogers who hit back and levelled by taking the second game by the same score, and then eased away to take the next two games 11-7 11-4 as Leicestershire led 1-0.

What followed were four sets of unbelievable table tennis as the destination of the title looked to be heading first one way and then the other. The ladies singles was the next set on the table and saw Adams take the opening two games 11-9, but was gradually hauled in by Smith who levelled by winning the next two games 11-8 11-4. However, it looked like the Yorkshire player was going to deliver a telling blow for her team as she led the decider 9-7, but in a mammoth effort it was Smith who took the next four points to record an 11-9 win and give her side a 4-2 lead.

The men’s doubles was next by which time Sussex had beaten Cheshire and guaranteed themselves the runners-up spot because if the match still in progress ended in a draw, Leicestershire would drop into third as would happen to Yorkshire if they were defeated.

The men’s doubles saw Newman and Rogers take the opening two sets 15-13 11-7 against Clinton and Pugh but a dogged effort from the Yorkshiremen brought them back into the set and the match as they reeled off three straight wins 11-7 11-9 11-9 to bring the teams to within a set once again.

In the next set it was Lewis who started the best by taking the opening two games against Gannon 12-10, but he could not cross the finishing line as Gannon took the third by the same score and then took the fourth 11-9 to set up a deciding game. It was the Leicestershire player who stormed into an 8-2 lead in the decider but Lewis was not finished and brought himself back to the game at 6-8 down. With both teams on the edge of their seats it was Gannon who emerged victor as the players shared the remaining points and Gannon gave Leicestershire an unbeatable 5-3 lead with an 11-8 win.

The final singles saw some scintillating play between the top two players with Rogers taking the opening game 11-6 only for Clinton to level 11-8 and with the next two sets shared a decider was needed. This looked to be going the way of Yorkshire as Clinton lead 5-2 at ends but player of the weekend Rogers was not going to give up without a fight, and clawed his way back into the game going ahead at 7-6 and finally running out 11-8 victor to take the set and give his county the match and the title.