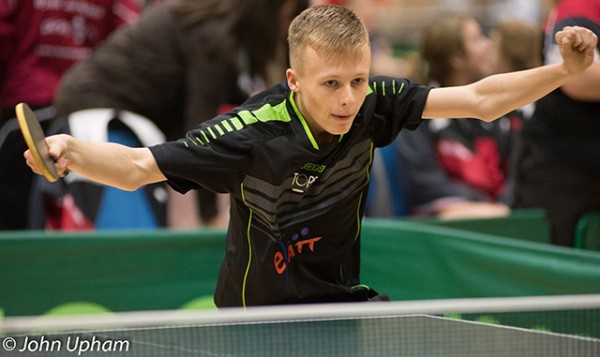 Representing Bbatt, Dan won 8 out of 10 singles for an 80% average. His side, also represented by Sam Mabey (Northamptonshire) and brothers Jack and Josh Bennett of Polegate, East Sussex, beat London Greenhouse 5-1 and Batts  4-2, and drew with Ormesby, Wales and Wood Green 3-3, to finish second in the table.

Unfortunately Dan started his campaign poorly, dropping both of his singles to Wales in a repeat of the recent UK Schools Games. Although going down to Welsh no.1 Conor Edwards was no disgrace, he would have hoped to beat Ryan Oyler, to whom he fell narrowly, 3-2 (9-11, 11-5, 11-7, 9-11, 9-11).

Thereafter Lawrence, England junior ranked no.5, hit top form and was unbeaten. Among his scalps were Jared Patel (Essex) of Batts, ranked 6, Adam Harrison (Lincolnshire) of Wood Green, ranked 4, and Tom Jarvis (Lincolnshire) representing Ormesby and ranked 8th, who had also beaten him at the UK School Games.

Currently training at the Grantham TT Academy, Lincolnshire, Lawrence feels that his new training regime is beginning to pay off for him:

“I played especially well on Sunday against Igor Morais and Tom Jarvis. Against Igor my forehand flick was my best shot. Against Tom I rallied very well and waited for the right shot to power through. I also felt that my third ball attack on both my backhand and forehand were very strong over the weekend.”

But boarding at Grantham, Dan admits to missing home. “It has been difficult. My mum used to do everything for me and I do miss her. It’s been difficult cooking and looking after myself but I’m starting to get used to it now and I’ve really enjoyed it.”