All the results from today’s group stages of the Nationals qualifiers plus tomorrow’s knockout draw! 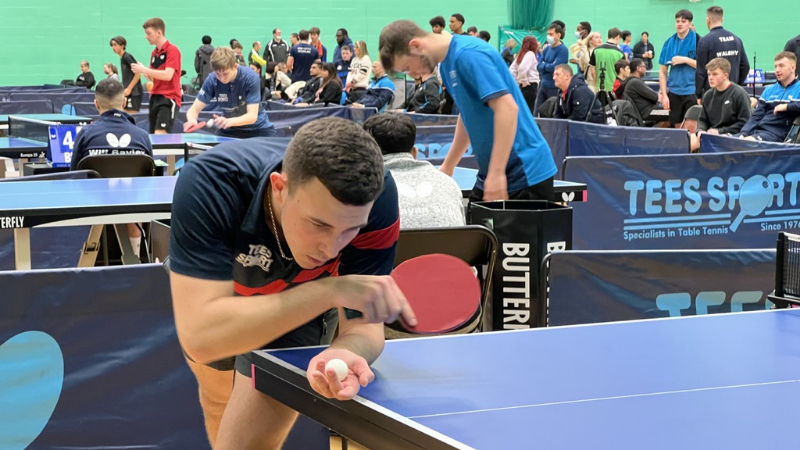 Today marked the start of the Mark Bates Ltd Senior National Championships Qualifying Tournament, with a record number of competitors vying for the chance to compete against the elite in the main competition in March.

There was an incredible 61 years age difference between the youngest and oldest players at the tournament, with 12-year-old Kacper Piwowar winning his first match in a Senior tournament against 14-year-old Joseph Dennison.

See highlights from today’s action in the video below or to find out what happened in the Men’s Singles and Women’s singles carry on reading.

34 women participated today which is 19 more than the last qualifying tournament in 2020.

Group 1 predictably saw Scarlett Anders at the top and the rest of the group all going through to the knockout rounds on Sunday.

Group 2 followed a similar pattern, with highest ranked player Millie Rogove winning all her matches and topping the group. All but Connie Dumelow who finished in 8th automatically qualified. Dumelow played in a round robin to determine one more female place in which she couldn’t overcome Fliss Pickard in a very tight match.

Anna Green ranked third in her group came through to take the top spot, beating all of her opponents in the group. All of the group have gone through to the knockout rounds on Sunday.

A close battle between fifth and 6th seeds Sara Williams and Amy Marriot saw Williams come out on top beating Marriot in a very close match (11-8, 11-9, 11-8). Fliss Pickard finished in seventh and had to earn her spot for Sunday in a round robin which she won.

In the men’s singles there were a staggering 17 groups with a total of 117 men taking part in the first day of the qualifying tournament.

Andrew Baggaley blitzed through Group 1, only dropping 26 points in five matches. Baggaley will now face Adam Webster in the first knockout round tomorrow.

Second seed Sam Wilson pulled out of the tournament leaving the top spot in Group 2 up for grabs. 69th seed Howard Onweng jumped at the opportunity and caused a huge upset by topping his group and knocking out the other four in the process.

Lowest ranked in the group Krish Chotai stormed to victory and progressed through to the knockout rounds on Sunday. Adam Dennison followed close behind in second and progressed to the playoffs where he was knocked out by Adam Webster.

In group 6 another shock result as Joseph Hunter ranked the lowest in his group finished top, with Ethan Walsh coming in at second, and Paralympic medallist Will Bayley left in third and knocked out of the tournament.

Top ranked Shayan Siraj finished top of the group, qualifying for Sunday, but a shock second place for Aaron Geung who was ranked bottom of the group means he will join Siraj tomorrow.

In Group 8 top ranked Joshua Weatherby went through in first place without dropping a set, with Olly Tyndall following in second.

England pathway player Rhys Davies topped his group as Felix Thomis finished second – both through to the knockout rounds on Sunday.

Graeme Barella won all five games in a tough group as James Hamblett came in second after losing to third place Sammy Kaye.

Umair Mauthoor qualified in top place with England pathway player Max Stevens coming in at second to go through to the knockouts.

In Group 13 there were no surprises as Naphat Boonyaprapa took first. With two competitors pulling out from this group, only Boonyaprapa has gone through to the knockouts tomorrow.

Another standard format group, with the top two ranked players going through in first and second place.

Group 15 saw on form Connor Green tear through his opposition, not losing a set. Thomas Rayner progresses through to the knockout in second place.

England pathway star Ben Piggot blazed through his group with Larry Trumpauskas finishing second to join him in the knockout rounds on Sunday.

Lastly, Naphong Boonyaprapa and Toby Ellis both put in some excellent performances to finish first and second and progress to the next stage.