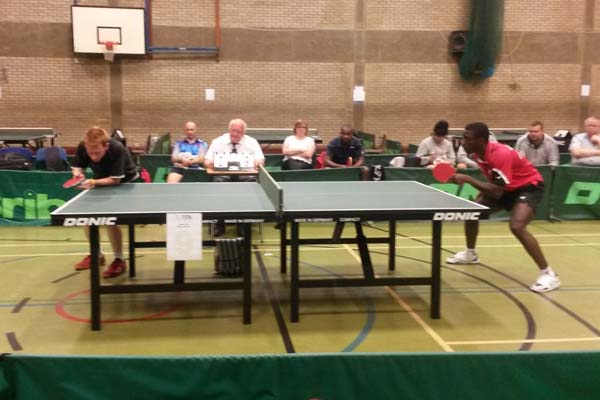 It attracted a full house of entries in the 15-table venue, with a good prize fund of £1,250 cash plus £400 Topspin sports vouchers across 16 events. Major sponsor Urban & Civic, developers of Alconbury Weald (formerly Alconbury Airfield) were represented by their Office Manager, Victoria Parchment who attended on both days to present prizes. She was joined on Saturday by Councillor Bill Hensley, Mayor of Huntingdon and Councillor Nick Dibben, Mayor of St Ives on Sunday. Nick Dibben surprised everyone by taking off his chains of office and jacket to have a knock with sponsor Topspin’s Tommy Cutler.

The Seniors Day on Sunday climaxed with some spectacular table tennis. In the Men’s Singles quarter-finals top seed Gavin Rumgay (SCO) treated everyone to the most breath-taking rallies against fellow Scott Niall Cameron (SCO). Rumgay went on to beat his fellow countryman to proceed to the semi-finals.

The other quarter-final in the top half of the draw featured Matt Dodds (Ys) and Mike O’Driscoll (Y).  O’Driscoll had a convincing win over Dodds to show that he has lost none of the talent of his early years as one of England’s most gifted players. In the bottom half of the draw Emran Hussain (E) overcame Everton Waite (K) to progress to the semis. Waite is without doubt the enigma player of table tennis with a style that defies all coaching. In the early rounds he despatched young talent Luke Walsh (He) and then Miro Vala (K).

But the match of the day was the quarter-final featuring Adam Nutland (Wo) and Darius Knight (Sy).  The whole hall stopped to watch the most beguiling display of attack and counter attack table tennis from these two athletes. Knight finally prevailed beating Nutland to meet Hussain in the semis.

The semi-final between Rumgay and O’Driscoll was equally thrilling. The rallies were mesmerising between these two gladiators and no one wanted it to end. Rumgay finally came out on top. The other semi-final matched Hussain with Knight and provided some fast and furious attack table tennis with Knight winning. The final between Knight and Rumgay had everything to please the crowd and although Rumgay put up a good fight, in the end Knight proved too strong and took the title.

In the Men’s Band 1 Singles Jimmy Walsh (He) knocked out Matt Dodds (Ys) in the semis while Emran Hussain (E) battled his way past Niall Cameron (SCO) before prevailing over Walsh in the final.

On Saturday we were treated to a feast of young talent at the Junior and Cadet tournament.  In the Junior Boys event Jack Merton (K) No 6 seed and winner of the Cadets last year displayed his superb skills to defeat No 4 Michael Bree (St) in the quarters and No 3 Adam Jepson (Ca) in the semis.  In the other half of the draw the No 7 Ben Cawston (Ha) saw off Marley Cross (Sy) in the quarters and Regan O’Neil (K) in the semis only to be defeated by Merton in the final.

In the Cadet Boys event the No 1 Seed Nathan Butler (Li) beat Sam Liu (Bk) in the quarters and Jack Merton (K) in the semis to reach the final.  In the other half of the draw on his way to the final Ben Cawston  (Ha) beat Harry Saxton (Ys) in the quarters and upset the apple cart by knocking out the No 2 seed James Smith (K) in the semis but met his match in Butler who won.

In the Under 11 Boys, the youngest category, it was apparent that the future is bright with the talents of Jamie Liu (Bk) and Richie Bailey (Np) on display in a smashing final, the first game finishing 22-20 in an unbelievable display from the youngsters.

In the Cadet Girls Tiana Dennison (E) beat Jasmine Chan (Mi) in a thrilling fast-paced final.  In the Junior Girls Jasmine Chan got her own back taking the top spot with Tiana Dennison as runner-up.   Tiana Dennison completed the day very successfully adding the Under 13 Girls medal to her array of prizes beating Mollie Patterson in the final (Nk).  In the Under 11 Girls Scarlett O’Neil (K) came out as top girl with Isabella Facey (Ca) as runner-up.  Chloe Pryke (Ca) came 3rd and Abigail Facey (Ca) 4th in their first open tournament.  Two supplementary awards were made.  This year’s Best Performance Young Player medal was won by Scarlet O’Neil and the Most Promising Young Player medal was awarded to Isabella Facey.