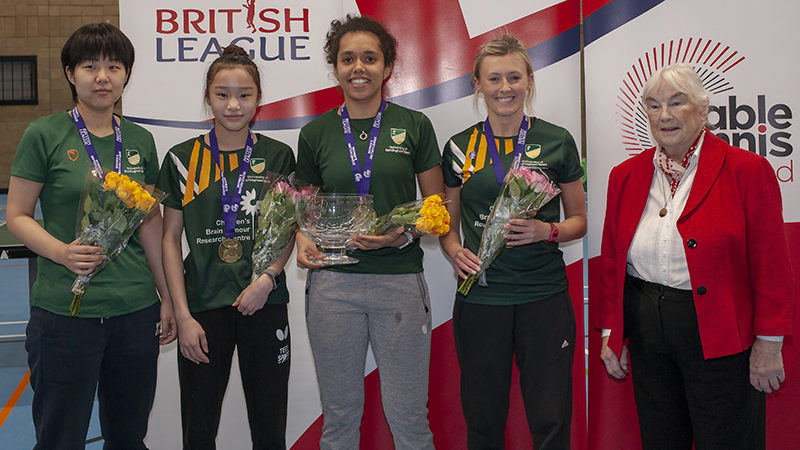 The champions went into the second weekend in Wolverhampton with a 100% record and a two-point lead over their nearest challengers, but that was whittled away in the first round of fixtures as Byng Hall held them to a draw.

Byng Hall were never behind in the clash, with Naomi Jackson beating Rachel Trevorrow in Match 3 and Rasimaviciene overcoming the same opponents in Match 5. It meant YHL were indebted to Yolanda King, who won her ties against Letitia McMullan in Match 2 and Jackson in Match 6 to seal a 3-3 draw, with Yang returning to form by beating McMullan in Match 4.

Burton started with a 6-0 victory over Formby to close the gap to the leaders and, after both teams had won their seventh-round matches, the dynamic shifted again in round eight as YHL another dropped point.

This time it was XLNT Draycott who inflicted the wound, but the manner of the result was quite different to the earlier match as XLNT came from 3-0 down to force a draw. The catalyst was Emma Vickers, who beat Yang 3-2 in a see-saw clash (11-2, 5-11, 11-7, 4-11, 11-6). Inta Zdanovska reduced the arrears further by beating Trevorrow and Abbie Milwain completed the comeback against King.

With Burton winning 5-1 against Fusion in the same round and both of the top two teams victorious in Round 9, it meant they went into the final round level at the top, with the winners taking the title.

Kate Hughes pulled Draycott back into it as she defeated Ruby Chan in three, but Yang’s 3-0 triumph over Patterson put YHL a match away from the title – which King duly confirmed 3-1 against Hughes. The final score was 4-2 as Peake beat Chan in the final match.

At the bottom, Byng Hall defeated Formby 5-1 in Round 8 and confirmed their survival in the final round as they overcame Draycott 4-2 while Formby lost 5-1 to Fusion.

Yang’s two defeats saw her overall average drop to 90% (18/20) but she still toped the player averages ahead of Peake (16/19) and Patterson (16/20). Byng Hall’s Rasimaviciene, who did not feature on Weekend 1, won nine of her 10 matches this weekend, losing only to Patterson.

Division One was tight going into the weekend, with Knighton Park leading the way from Burton Uxbridge II, but it was Glenburn Ladies who made their move in the first round as they defeated the leaders 4-2, following it up with a 6-0 scoreline against Burton in Match 7.

Knighton Park recovered from their defeat to post a 5-1 result against XLNT Draycott, and the two clubs matched each other in Round 8 – both drawing – and Round 9, when they both won 4-2.

It meant KP were a point ahead as they faced Burton in the final round, with Glenburn up against Culcheth. In the event, KP’s 5-1 scoreline meant the Irish team’s result was irrelevant, though they dropped a point as they were held 3-3.

Knighton Park’s driving force was Darcie Proud, who won nine out of 10 on the weekend – losing only to Halton’s Anaya Patel in five – for an overall average of 90%. Patel, who didn’t feature on Weekend 1, also won 9/10 this time out.

Division 2 was won at a canter by Drumchapel Glasgow, who won all five matches to end with 19pts comprising nine victories and a draw. Their closest match was the 4-2 victory over Thorntons I nthe final round – their opponents ended in second place, five points off top spot.

Drumchapel had the top player in the averages in the shape of Rebecca Plaistow, who claimed 17/20 for an 85% average, one better than Jane Ji of Fulham Brunswick.

Two teams were unbeaten in Division 3 and it was Fusion II who shaded it, ending up on 17pts. Their record of seven wins and three draws put them a solitary point ahead of Burton Uxbridge III, who won six and drew four.

In many ways, the crucial result was Burton’s 5-1 win over Cardiff City in the first round of matches on Saturday, Cardiff having been level on points with Fusion going into the weekend.

The top two then won their remaining three matches, Fusion ending with a 6-0 win over Cardiff City to rubber-stamp the divisional title. Swetha Khatri’s double in that match completed a 100% record from the 19 matches she played over the season.

Joola Plymouth swept all before them in Division 4, completing a perfect 10 with few alarms – indeed, they dropped only four individual matches in the entire season. Two of those came in the final match against Cliffedale Chandlers, who they beat 4-2. Chandlers ended in second place, but a huge 9pts behind the champions.

Not surprisingly, Plymouth boasted the top three players in the averages – Gemma Kerr and Emily Haskell both won 18/20 for 90% ratings, with Marketa Myskova having a 100% record from 16 ties.

In Division 5A, Dun Laoire lost their perfect record in the final round but remained unbeaten as the final score was 3-3 against Cardiff City II, who clinched the point when Jamie-Lee Harley overcame Tara Fusco in three close sets (12-10, 16-14, 11-8).

Cardiff, who ended in second place, three points behind the champions, did have the top player in the averages as Beth Richards posted a 94.44% record with 17 wins from 18.

In Division 5B, NETTS took the title by two points from Drumchapel Glasgow II, the same position the teams had occupied going into the second weekend.

However, it was not all plain sailing as Glenburn Irish Ladies II won all five matches over the weekend, including ending NETTS’ 100% record in Round 9.

Rachel Trevorrow of YHL & UON was awarded the Solihull Cup, for a coach, official or player who has most enhanced the WBL this season, after receiving the most nominations from clubs.