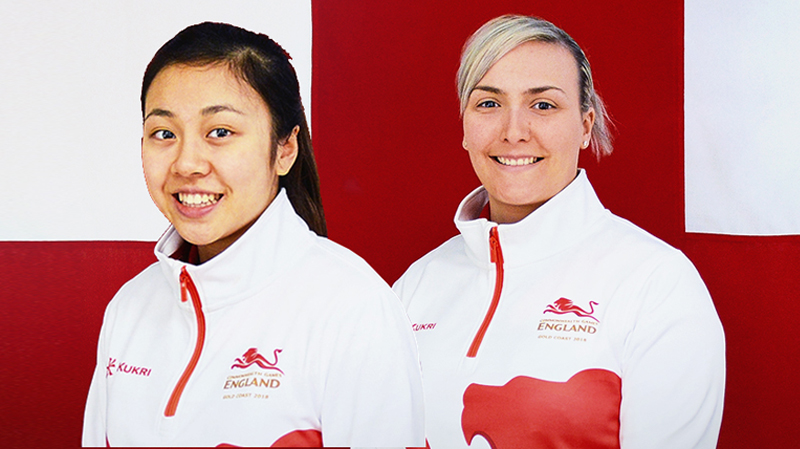 Both Tin-Tin Ho and Kelly Sibley stood on the podium four years ago as part of that amazing England 1-2-3 led by gold medallists Paul & Jo Drinkhall.

Ho will once again team up with Liam Pitchford as they aim to build on silver, while Sibley will have a new partner, having won bronze last time alongside Danny Reed – she is set to play with David McBeath in Australia.

Between them, the pair will be clocking up their sixth appearance on this stage, with Sibley having also featured at the 2006 Games in Melbourne and the 2010 edition in Delhi.

Having finished fourth in the team event in Glasgow – and also in Delhi in Sibley’s case – both will be able to draw on happy and not so happy experiences to spur them on.

Sibley said: “In the team event, our main goal is to get a medal, and I think we will be there or thereabouts. If we can come together as a team and play well, we can get that medal.

“I remember finishing fourth in Delhi in 2010 and I lost the deciding match against Malaysia 12-10 in the fifth set. It was one of the worst feelings I’ve ever had and probably the worst in my career.

“But I used it to spur myself on and in Glasgow Danny and me played fantastically to win that bronze.

“I’ve got good memories from Glasgow and it’s still fresh in the mind even though it’s four years ago. We can use what we achieved then and hopefully push on.

“To be selected for any major Games is always exciting and I’m always really proud to represent England. My first Commonwealths were in Australia in 2006 and to compete there again is really exciting.”

Ho was one of the youngest Team England members in Glasgow, at the age of 15, and will have the rare distinction of competing in a second Games while still a teenager.

She said: “It’s my second Commonwealths and the last one was a really good experience. It was my first big multi-sports event, so I know what to expect this time.

“I remember Glasgow really well. I was the youngest player and felt I had no pressure and went out and enjoyed it.”

And she is confident she will get to stand on the podium again, whether in team, singles or doubles events.

She added: “In the team event, I think it will be quite hard but I think we can win a medal. India and Singapore will be good, and Malaysia and Canada.

“My goal is to get an individual medal too but I know that will be really tough. It’s something I can work towards and see what happens.”