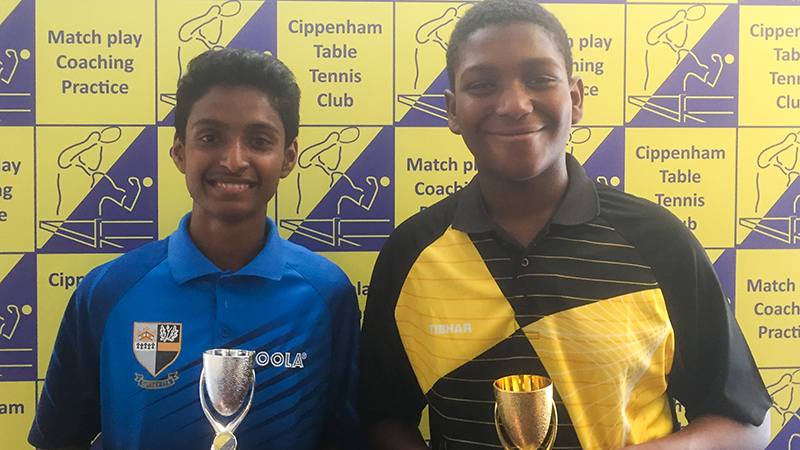 Cippenham Table Tennis Club’s season concluded with another successful open tournament over the weekend. Styled as the Cippenham Young Players’ Summer Festival, this was a nationally approved 1-star event, run over two days and catering for four different age categories between under-12 and under-18.

Mahmood Kelani and Kirsty Maull were the undoubted stars of the events on Sunday as they both clinched the two titles open to them.

For Kelani this signified a huge step up from unseeded positions in both events. Ranked just outside of the top four in Sunday morning’s Under-16 Boys’ Singles, Kelani won his preliminary round group and then eliminated Cippenham’s William Saint in the first knock-out round. Fourth seed William Avery followed next and then top seed Daniel Broner was eclipsed in the semi-final.

Waiting for Kelani in the final was Evan O’Connor after the Welsh player had seen off the challenges of second seed Alex MacDonell and Ben Barbarasu. Cippenham’s Jayden Caldeira and Pranav Gudipati both reached the quarter-final but were undone by Broner and Barbarasu respectively.

There was a smaller field for the Under-18 Boys’ Singles in the afternoon. The winner was once again Mahmood Kelani but this time his opponent in the final was Krishna Nagarajan who had overcome top seed Daniel Broner in the semi-final. The other semi-finalist was Alex MacDonell.

Kirst Maull travelled all the way from Staffordshire to win both the girls’ events on Sunday and on each occasion the runner-up was Berkshire’s Jyothi Ghanta.

Saturday had seen the younger age groups, under-12 and under-14, take to the tables. Third seed Kai Sun Yiu was the winner of the Under-12 Boys Singles. After winning his group and then progressing past Louis McPhee, Kai then proceeded to take down the top two seeds, second seed Max Radiven in the semi-final and then top seed Siva Ghanta in the final. Ghanta’s progress had been against Adam Alibhai and then Toby Harwood in the semi.

The Under-14 Boys’ Singles was won in fine style by Toby Crawcour who never looked in any trouble throughout the event. After winning his preliminary round group, Crawcour strolled through George Thorn and then Ben Barbarasu in his semi-final before securing the title with an even more accomplished display against Evan O’Connor in the final. Third seed O’Connor had put paid to the run of second seed Danny Klinger in the semi.

Cippenham’s William Saint reached the quarter-final but, despite claiming the third game, could not get the better of Barbarasu.

Cippenham’s top two girls were in action during the Saturday events and they reached a final apiece but were unable to go that one step further and clinch a title. Rachael Iles was top seed in the Under-12 Singles and survived a nervy five-game semi-final against Sasha Lewis but was ultimately no match the accomplished Emily Cheung in the final.

Iles was seeded second in the Under-14 event but was beaten by her Cippenham team-mate Anna Piercey in the semi-final. That event was won by Heidi Oestreicher despite her finishing only second in her group to Iles.