The British League season is ready to get into the full swing of things as the juniors get set to enter the festivities of the 2012/13 season.

Following on from the proceedings of the Senior Premier British League last month, the limelight now turns to juniors as they try to drive themselves to glory in eight divisions.

Tipton Sports Academy will host the event where Britain’s most talented young starlets will take centre stage in one of the biggest events on the British table tennis calender.

Ellenborough will be looking to retain their Premier Division crown and will be a formidable force for all opponents with the likes of Zsolt Szarka, last season’s averages winner, Daniel Wright and Sam Cowan.

BBATT look to be close contendors for the crown with Helshan Weerasinghe, Zak Zilesnick and Sam Mabey looking certain to come out all guns blazing, although the like of OLOP Impact with Liam McTiernan and Danny Lawerence plus newly promoted Bournemouth Sports are likely to provide a stern test. Regardless, the Premier Division will undoubtedly spring up some surprises over the course of the season.

The unpredictability continues in the first division with all six teams gunning to gain promotion to the promise land of the Premier. It will be BBATT 2 with Cadet Masters star Tom Jarvis that, like their first team counterparts, will lead the charge in aiming to gain entry to the promise land of the Premier, although the presence of Ormesby, BATTS Halton TTC alone leave the division standing in good stead and capable of producing some incredible table tennis over the season.

Division 2A also appears to be strong with 6 exceptional teams. Rotherham Scorpions have an array of talent capable of challenging anyone, but with the likes of Woodfield and Halifax in the competition, the league is open for anyone to bring home the trophy

Division 2B is also very strong with Gratham Tornadoes, Formby and St Marys TTC Hull looking set to be part of another epic title showdown 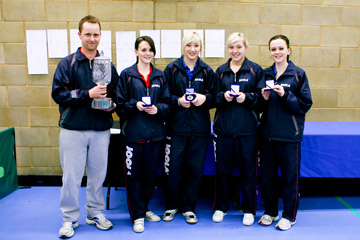 It isn’t just the boys who will be taking to court, however. The Girls Premier Division looks equally impressive and will undoubtedly see some inspiring table tennis take place.

Wales will look to retain their crown with Wales’ youngest ever Commonwealth athlete Charlotte Carey spearheading their line up, and despite losing the Phillips sisters this term, Nicole Hall and Beth Roberts are still more than a challenge for the rest. Amongst several challengers will be Northfield Girls with the current Junior Girls National Champion in Jessica Dawson and former National Junior Champion Emily Bates in their squad and Burton Uxbridge 1 containing England Junior No. 4 Vicky Smith, who between them include some of the finest female talent the country has to offer.