Tom Jarvis staged a remarkable comeback from 7-2 down in the final game against Luke Savill in a thrilling Cadet Boys Singles Final to seal his maiden Cadet National Singles title at the Sir Tom Finney Sports Centre in Preston.

Jarvis, a losing finalist in 2012, was determined to make amends for his defeat to Marcus Giles in Hatfield last year and set about his task with supreme concentration – dropping just one game en route to the final.

The Skegness star bulldozed past both James Rule and Robert Barker in straight games before dropping his only end during an entertaining match with Alec Ward. Ward, a previous National Champion of his own right, blitzed the top seed in the second game of their quarter-final 11-2 before ultimately falling 3-1 to the Lincolnshire lad. Their last eight meeting was only equalled on quality by the show put on by James Hobson and Harry Dai during the same period.

On the other side of the draw second seed Luke Savill and fourth seed Omar Khassal wove their ways towards a crunch semi-final meeting. Savill, whose gracious style of play helped him past Artur Caltabiano, James Chappell and Liam Grant was stunned by the powerful Khassal, who had beaten Alex Tilley, Curtis Welsh and Alex Ramsden, in an 11-1 first game reverse.

Although Savill quickly responded 11-3 in the second, a topsy-turvey match was further embellished by Khassal taking a 7-1 lead in the third. However, that was when the Kent cadet made his crucial move to claw back the deficit and level at 8-8 before taking the game, and a 2-1 lead, 11-8. After the fourth game progressed to a more serene 11-8 scoreline for Savill, the second seed had finally booked his place in the final against Jarvis. 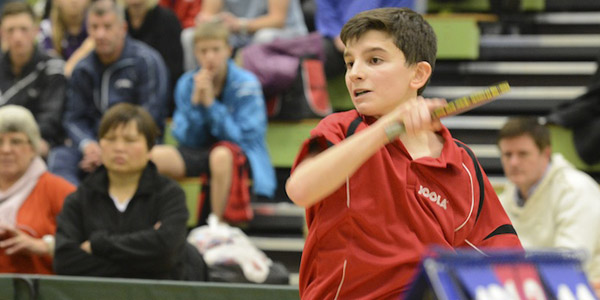 The final itself was an astounding, high-octane clash that fluctuated one way and then the next. Jarvis took an early 9-7 lead in the first but when he missed a smash on game point it was actually the second seed Savill who had earned the opening end. Soon after, the duo traded blows with Jarvis levelling following an 11-4 game, before Savill re-established his lead 11-5. This is where the real drama kicked-off.

Leading 10-5 in the fourth, Jarvis was cruising towards a fifth end, but, once Savill had worked his way back to 10-10, three fortunate nets in a single rally from the Kent youngster gave him his first match point. Jarvis, undeterred, was able to hold his nerve and save the match point before taking his own game point for 13-11 – forcing the Championship into a deciding end.

This time it was Savill who took control, leading 5-0 at the change of ends and 7-2 deep into the game before Jarvis incredibly fought back to level at 7-7. It looked like it would be Savill’s day when another fortunate net set up two more match points at 10-8, but once again they were spurned – it was a golden opportunity that he would rue soon after.

Despite missing his first match point at 11-10, Jarvis took his second for a 13-11 game to cap off a brilliant final. You can watch the incredible climax to the boy’s final here as Savill leads 2-1, 5-10. 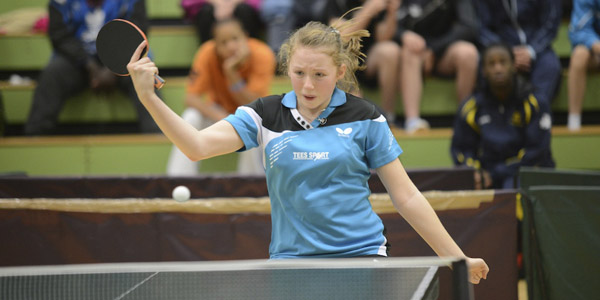 Sussex’s Kate Cheer raised her game to another level to win her first ever Cadet Girls’ Singles National Championship after beating both the top seed Denise Payet and second seed Kate Nixon en route to a well-deserved title.

Cheer began her campaign competently by winning her group with ease before defeating Gauri Duhan in three closely fought ends 11-9, 11-9, 13-11 to make the quarter-finals. That’s where she met the first of her big three tests in the form of sixth seed Jane Li.

Li pushed Cheer to the full distance in the longest battle of any of the boys’ or girls’ quarter-finals as the conclusion came long after all the other results had been settled. It appeared as though Li had control of the match in the deciding game, forcing the pace as critical points, but she was unable to take her match points as Cheer edged home 13-11 in the fifth to keep her championship dreams alive.

At the same stage in the competition her main rivals, Payet and Nixon, both won through comfortably against Stephanie Cross and Bhavika Mistry in their respective meetings, while ninth seed Amy Blagbrough battled hard to fend off the challenge from Tiana Dennison in a tense 3-2 (11-9, 6-11, 11-7, 7-11, 11-9) win.

Unfortunately for Blagbrough, her efforts in the previous round were not rewarded with the rub of the green in the semi-final against second seed Nixon as the favourite sealed back-to-back 13-11 games en route to a 3-0 victory, which was understandably closer than the scoreline suggested.

To meet Nixon in the final, Cheer had to beat top seed Payet, but that was exactly what she achieved following five fast-paced sets. The pair were inseparable over the first four games – Cheer opening her account with a 12-10 game before Payet replied 12-10, followed by Cheer again leading through an 11-6 game, only for Payet to replicate the scoreline to force the match into a one-game shootout for the final.

It was at that point where Cheer’s confidence shone through as she raced into a 5-0 lead on her way to a one-sided 11-4 game and, most importantly, a place in the final.

Although the ‘Kate-derby’ between Cheer and Nixon was hard-fought, there was no stopping the assured third seed as she rode the crest of a fine wave of form to complete a relatively straightforward final win in three straight games and secure her maiden Cadet Girls’ Singles title in the process.

Cadet Boys’ Singles finalists Tom Jarvis and Luke Savill teamed up to retain their Cadet Boys Doubles crown after an entertaining final against the left-hand/right-hand combination of Alex Ramsden and James Smith.

The top seeds were always strong favourites to win the tournament and made no mistakes as they reached the final after dropping just two games in their previous three matches.

However, their opponents at the final hurdle were not who they were expecting to meet as Ramsden and Smith, just 13 and 12-years-old respectively, managed to come through two five-end matches to reach a surprise final.

At the final hurdle the underdogs perfomed admirably once more a threatened a recovery from 2-0 down when they won the third game 11-5, however, Jarvis and Savill had too much class and experience in the end, meaning they retained their title from 2012 and earned Jarvis a perfect double on the day.

With last year’s Cadet Girls Doubles Champions Tin-Tin Ho and Emily Bolton out of the equation for the title in Preston having left the age group, the title was wide open for a brand new winner to emerge.

The top two seeds; Denise Payet/Zahna Hall and Kate Cheer/Kate Nixon, were favourites to contest the final at the start of play and duly booked their places in the final after both pairings secured their passage with back-to-back 3-0 wins.

Payet and Hall were competent victors over Holly Johns and Aimee Evans in the quarter-finals before defeating the Dillon sisters, Megan and Alice, in a straight games semi-final. On the other side of the draw, the two Kates, Cheer and Nixon, who had earlier contested the singles final, beat Isabelle Joubeily/Jasmine Chan before seeing off Grace Potter and Amy Blagbrough to reach the final.

Despite the ease at which both sides had booked their final spot, there was to be a titanic tussle between them to fight for the main prize.

Middlesex pair Payet and Hall took a close first game 12-10 before Cheer and Nixon replied in kind with an even tighter 13-11 game. The pattern continued with Cheer and Nixon establishing a 2-1 lead following a hard-fought 11-9 end but a run of nine consecutive points changed everything in the next end.

Leading 8-2 it looked like Payet and Hall were set to force a deciding game but miraculously Cheer and Nixon clawed their way back to an 8-8 tie before two fortunate nets helped the latter duo secure a 10-8 lead and two match points.

They needed just one as they completed the turnaround with nine consecutive points to seal their maiden doubles title and, just like in the boys’ doubles, a second crown of the day for the delighted Cheer.

– You can watch all the action from table two over the weekend here. Note: You will have to scroll through day recording to find relevant matches.