Top seeds Japan and second seeds China lived up to billing as they dismissed their semi-final opponents 3-0 to advance to the gold medal match at the ITTF Team World Cup at the Copper Box Arena. 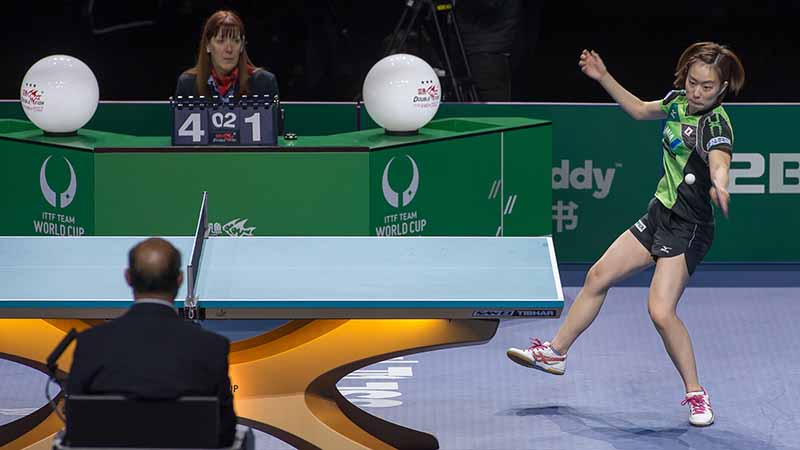 Top seeds Japan and second seeds China lived up to billing as they dismissed their semi-final opponents 3-0 to advance to the gold medal match at the ITTF Team World Cup.

Japan were first in thanks to victory over North Korea in the first match of the day at the Copper Box Arena.

With the three Japanese ranked at #4, #6 and #14 in the world, it was always going to be a tall order for opponents ranked at 52, 181 and 320, despite having shocked the fourth seeds Chinese Taipei yesterday to guarantee bronze.

Japan’s Mima Ito & Hina Hayata, both aged 17, started quickly in the doubles and opened a 2-0 lead with room to spare, Ito in particular impressive, with the right-hander hitting winner after winner.

The Korean pair of Cha Hyo Sim & Kim Nam Hae looked set to find a way back when they led the third 10-6. Three successive points for the Japanese prompted a timeout, but it did not have the desired effect as the next three points also went to the top seeds to complete a 3-0 victory.

The first singles saw a huge contrast in styles, with world No 4 Kasumi Iskikawa against defender Kim Song I, the highest-ranked Korean at 52.

The Japanese dominated with constant top spin loops in the first, taking it 11-3. Kim improved in the second set, mixing it up more with some surprise attacking shots keeping her opponent honest. However, Ishikawa had too much quality, taking it 11-8 and went on to take the third 11-7, beating an opponent she lost to at the Olympics.

It was Ding who sealed it in a performance of grace and accuracy, the final serve skimming off the edge a rare slice of luck as she concluded a Chinese masterclass.