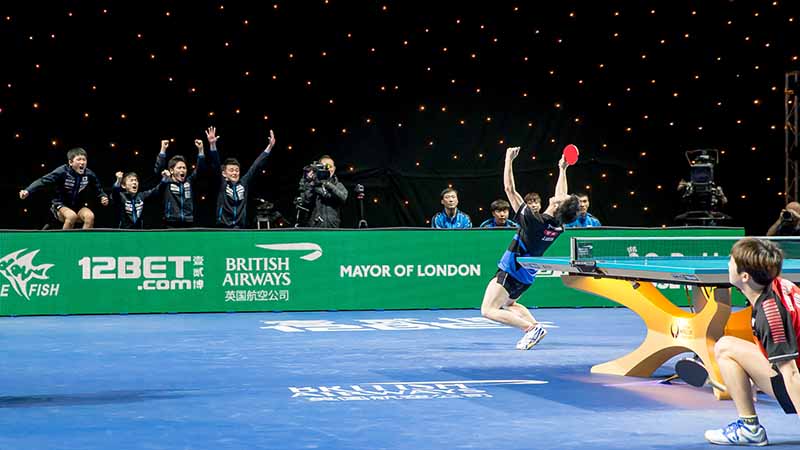 Having held a 2-0 lead and had two match points in the fourth tie, the second seeds saw their opponents claw their way back and level at 2-2. Jeong Sangeun then led Jin Ueda 2-1, only for Ueda to level.

But all that had gone before was just a prelude to a nerve-shredding climax in the deciding game of the deciding match of a fixture which ran to almost four hours.

At 10-6 down, Ueda and Japan were looking down the barrel, but the world No 27 somehow remained calm – quite probably the calmest person in an arena which by now was rocking.

All four were saved and Sangeun, dropping his bat in frustration, appeared a beaten man.

He in turn quickly collected himself and the players traded match points to 14-14, the tension tangible, the reactions from players, benches and crowd vocal.

Ueda missed three, Sangeun one and then, suddenly, it was over as the Korean failed to return a backhand up the centre and the bench led the the ever-vocal Harimoto, erupted in joy.

Earlier, there had been no sign of the drama to follow as Japan took a 2-0 lead – Ueda & Koki Niwa coming from 2-1 down to see off Lee Sangsu & Jeoung Youngsik in five and Tomokazu Harimoto then defeating Sangeun in four.

Youngsik kept it alive in four against the left-handed world No 6 Niwa but when Harimoto led Sangsu 2-0, it appeared only a matter of time.

A stunning 11-2 third game stemmed the tide, but the next game was a protracted as that one had been rapid.

Sangsu had three game points saved and the match then see-sawed as both players had opportunities – 14-year-old Harimoto twice seeing chances to get his country into the final pass by.

Sangsu eventually forced an error to win it 16-14 and completed the turnaround 11-8 in the fifth.

But there was to be no fairytale for the fifth seeds as Japan finally, memorably, dramatically clinched that coveted spot in the final.