Jack Hunter-Spivey completed a successful trip to the Far East by winning gold in the men’s class 4-5 team event with Japan’s Kentaro Doi on the final day of the PTT Bangkok Open in Thailand. 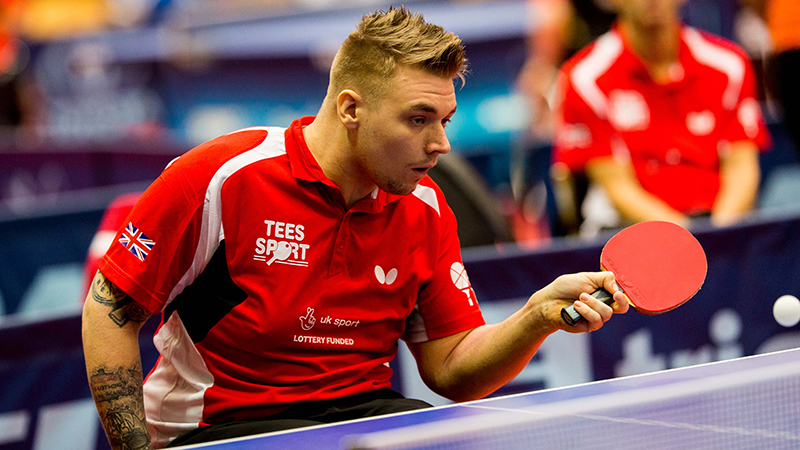 Jack Hunter-Spivey completed a successful trip to the Far East by winning gold in the men’s class 4-5 team event with Japan’s Kentaro Doi on the final day of the PTT Bangkok Open in Thailand.

Hunter-Spivey and Doi started with a 2-0 win against Caleb Crowden from Australia and Siaosi Vaka from Tonga and then defeated the Korean team of Kyeonghun Lee, Jin-sung Kim and Young Dae Joo 2-1. They won their final group match against the Thailand 2 team of Norakan Chanpahaka and Teeradech Klangmanee 2-0 and a 2-0 defeat of the Dutch team of Gerardus Van Grunsven and Sam Roelofs took them through to the final where they repeated their earlier win over the Korean team 2-0 to claim the gold.

“I’ve really enjoyed playing the team event here,” said Hunter-Spivey. “On the whole I’m a little disappointed with my form in the singles (during the team event) but I’m really happy to get the gold.”

Daybell, Shilton and Stockdale topped their group with a 2-0 win against Chan Hon Man and Wu Jiancheng from Hong Kong and a 2-1 win against Chinese Taipei/India combination of Su Jin Sian and Ranjit Singh.

That took them through to a semi-final against the Thailand team of 2017 Asian Championships silver medallist Bunpot Sillapakong and Phitak Kankingkam but after winning the doubles they had to settle for bronze after losing both singles.

“It was a poor performance from me in the team overall,” said a disappointed Daybell. “I tried my best but unfortunately the Thai player had the beating of me today.”

“I’m pleased to get a medal in the team event,” said Shilton, “and happy with how Kim and I played together in the doubles.”

“Even though my individual performance could have been a lot better over the tournament it was still a nice feeling to get a medal with two great team mates,” said 18-year-old Pathway athlete Stockdale, “and it has been a massive learning curve for me for future tournaments.”

The class 2 partnership of Bonnar and Ngangi lost 2-0 to the class 3 Thailand1 team of Anurak Laowong, Wittaya Wichaiwattana and Busree Wawaeni but reached the semi-finals with a 2-1 win against Weng Fai Jason Chee, Chee Keong Eric Ting and Muhammad Bin Huzaini from Singapore.

Bonnar and Ngangi took on the class 3 pair of Yosep Sefrianto and Cahyo Pambudi in the semi-final and the Indonesian pair were just too strong in a 2-0 win.

The second British men’s class 10 team of teenagers Shae Thakker and Dylan Tynan started with a 2-1 win against the Czech/Russian combination of world No 8 Ivan Karabec, Kristian Jelinek and Ivan Karpov but a 2-0 loss to Sillapakong and Kankingkam from Thailand who had earlier lost to Czech Republic/Russia meant that the group was decided on countback and the young British pair finished in third place.