It’s ‘back to school’ for young England athletes

The long wait was finally over for young players on the England performance pathway as they met up for training camps over the weekend – read about how the performance coaching team are helping them to develop on and off the table. 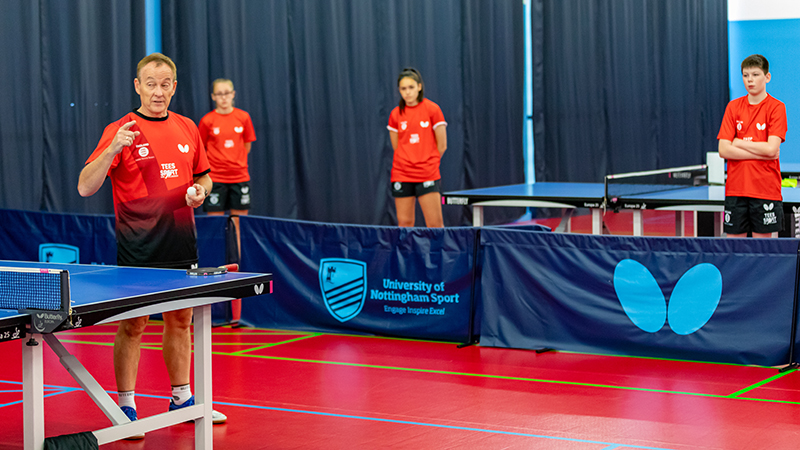 The long wait was finally over for young players on the England performance pathway as they met up for a return to training camps over the weekend.

The England Junior Squad (EJS) and the Aspire section were both in action in Nottingham – the Juniors at Carlton Le Willows Academy and Aspire at the David Ross Sports Village.

The young athletes proved that lockdown had not been wasted as they demonstrated the technical skills and physical conditioning which the England performance coaches and their own club coaches had helped them to work on during the period of enforced isolation.

Their work during lockdown was under the same philosophies and principles which the performance pathway works within to create more independent individuals who can think clearly under pressure by learning how to practice more purposefully and taking more responsibility for what they need to improve, both on and off the table.

These principles thread throughout all the pathway programmes from the youngest Hopes squad and through Aspire and EJS as well.

Programme Manager Matt Stanforth explained why it is important to take these approaches.

He said: “Our philosophy is based on the vast experience each member of the coaching teams brings. Many have played and all have coached at European and world level for many years and collectively we believe we have philosophy and structure that can support players from a very young age through to England Senior player in the future.

“One of the key aims of the pathway as a whole is to develop independent, problem-solving players. There will be many occasions the players will be on court without the support of a coach or parent and we help the players understand how they practise in a more deliberate and purposeful way and to have a greater awareness of themselves and their surroundings. Working this way will allow them to be better prepared to cope with the demands that the performance end of table tennis brings.

“Whilst we want to develop players who take more responsibility for their own learning, that’s not to say we don’t give them information. Part of the role of the national squads is to educate players, parents and coaches on what skills players need to have technically, tactically, physically, mentally, and emotionally to compete on the international stage.

“In our training sessions, we set them tasks with different challenges within them so that the players are not only engaged physically, but also more mentally and emotionally.

“We have seen many young players working hard physically on the table, however the awareness of what they are trying to achieve, what is actually happening, what they need to focus on to get better, is missing.

“By creating challenges, it adds emotional responses such as getting frustrated, for example. These emotions are normal, and by experiencing these in practice we then begin to develop other skills that are needed in performance, such as the ability to be able to reset.

“It also begins to replicate the pressures that players experience when competing, which can be a significant factor that players struggle to cope with. The more we can expose them to this in practice, the more they can practise how they can deal with this.

“Another part of that independence is developing life skills and taking more responsibility off the table. If a player reached the point where they may play for a professional club abroad, they needed to have the coping skills and strategies to be able to make this step.

“In reality, they will suddenly become responsible for their kit, travel, food, doing their tournament entries and so on, so the earlier we can develop that independence, the more they are going to be able to cope with this step.

“This all starts from our entry training programme Hopes, getting used to time-keeping and organising kit, having everything they need on court with them.

“A decision we took as a team was to ask that parents drop them off and leave them with us for the day. This is not because we don’t want to deal with parents, on the contrary, we want the players to start becoming more independent and that starts in a safe environment on a training day with very experienced coaching team who can ensure the players begin to learn and become more confident in taking more responsibility for themselves.

“As the players grow and progress through the pathway, the better equipped they become to cope with the increase in demands that performance brings.”

A vital cog in this system is the positive relationship between the performance pathway coaches and the individual players’ coaches and clubs back home, where they spend a big chunk of their time working on their games.

Matt Stanforth said: “The clubs and coaches back home are a vital part of the whole process. We don’t have a full-time programme with the players. We’re seeing them as often as we can, and we want to increase that, but there are logistical limitations to what we can do.

“Us, their coach, club, parents and any other key people of influence all need to work together for it to be successful. If we work in opposite directions, it has a negative impact on the players’ development.

“All the coaches who have players in the pathway are welcome to come and see what work we are doing and talk with us. The door is always open and we had players’ coaches attend a number of camps prior to lockdown.

“Any coaches who don’t yet have a player in the pathway, but have a desire to understand what we do, we’re happy for them to contact us and we can arrange a suitable time for them to come along to a camp, see what we do and chat through what our principles and philosophies are.”

One of the players to have taken these philosophies on board is Jake Haygarth, a member of the Aspire squad. Jake hails from the north-east and started his performance journey under the guidance of the coaches at Bishop Auckland TTC. He has this week started at Charles Read Academy in Grantham, where he will be able to practise more often with a greater number of high-calibre players.

Jake, 14, said: “They like to let us figure out for ourselves what we need to improve on and they help us to do that. It’s so we can learn for ourselves and be more independent so if there’s not a coach in your corner you will be able to think of your own tactics.

“The coaches help us a lot as well, so during lockdown we’ve been doing a lot of Zooms and meetings about what has been going well, and they’ve been setting us challenges. We send in videos and they comment on those as well. And players like Liam Pitchford have been running sessions and doing physical work with us.”

Jake’s mum Melanie added: “He’s come on so much, even at home he seems to think for himself rather than me doing everything for him. I think it will really help him at Charles Read as well – he’s going to have to do things for himself.

“It’s good for us to let him go as well, even though it’s difficult to take that step back. But it was his decision to want to go there – he said to us one day that he needed to be training with people who are better than him so he could improve. He really did his research about where to go!”

Anna Green, another member of the Aspire squad, said: “I’m really glad to be back, it’s time to meet up with people you don’t train with and get some good quality training.

“Being on the pathway has really helped me as a person because when I go abroad I can be independent and I know how to work by myself as well as with others.

“It teaches you all the skills you’re going to need when you hopefully have a career in table tennis and if you’re learning it now, it will help much more in the future.”

Anna’s mum Joanne, who is also a qualified coach, said: “I think teaching the players to be independent is an excellent idea and I’ve always felt the coaches have communicated with me as a parent and a coach.

“They are communicating with Anna’s coaches and she’s passing on the things she’s learned at the camps to her coaches and they are working on them. I think it’s working well.”