Pride of Table Tennis Awards winner Charlotte Binley is urging people to make nominations for this year’s awards before the closing date next week – and is also celebrating a GB call-up. 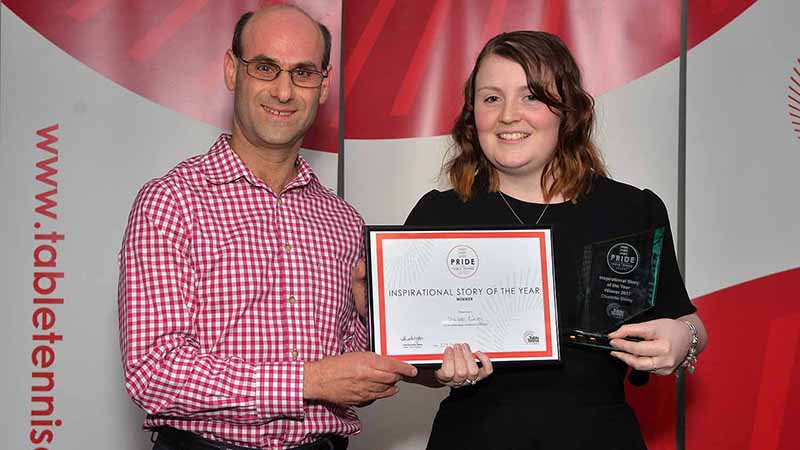 Pride of Table Tennis Awards winner Charlotte Binley has more memorable moments on the horizon after being called up to represent Great Britain at the World Transplant Games.

Charlotte, who won the Inspirational Story of the year category in last season’s awards, has been selected for the World Transplant Games in Newcastle in August 2019.

It follows her gold-medal performance in the British Transplant Games this summer and mirrors her feat from 2016 when she won the British gold to earn a place at the world games in Malaga, where she won bronze.

Her achievements came after being diagnosed with a highly rare form of blood cancer, for which she underwent chemotherapy and a transplant. She was nominated for a Pride of Table Tennis Awards in the Inspirational Story category by her boyfriend, Tom Maynard, and was named national winner at the awards ceremony in March.

Nominations for this year’s Pride of Table Tennis Awards close on Friday September 28.

Nominations start at a local level, with Clubs and Leagues able to award their own local Volunteer of the Year, who will then be put forward for a regional or national award in the most appropriate category.

At a national level, the categories include all those in the regional awards, plus Inclusivity Award, Technical Official of the Year, Ping! Personality of the Year, Partner of the Year, Inspirational Stories of the Year and League of the Year. The national awards will be presented at our awards ceremony in March 2019.

Charlotte said: “It’s great to be selected by Great Britain, it’s always quite exciting when I get the email to say I’ve been chosen. I got bronze last time so I’m hoping to get gold this time.

“I was surprised to win the Pride award, but it was amazing. I would say to anyone thinking of nominating someone to definitely put them up there for an award. It’s a big achievement to win one of the categories and gives you something to be proud of.”