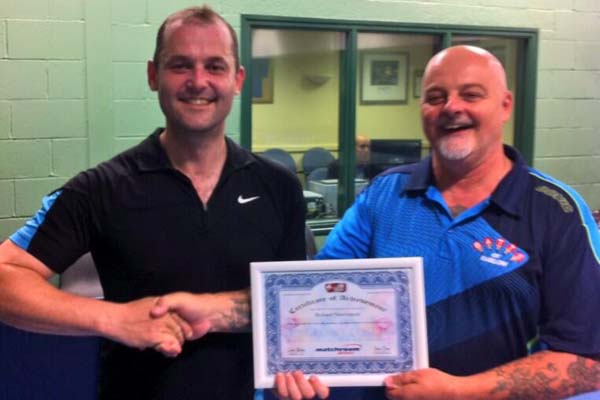 In a dramatic finale to the English Qualification Series for the World Championships of Ping Pong (WCPP) it was dark horse, Richard Hutchinson, who fought back from a match point down to seal an exciting WCPP English Closed title and a place in finals. Hutchinson, based in Suffolk, was one of many players desperate to win the English Ping Pong crown from Draycott and secure a coveted qualification slot available for Barry Hearn’s live Sky Sports WCPP Finals at Alexandra Palace next January 5-6th.

The day started with the group phases where the top four players would progress through to the last 32 knockout phase. Top seed Ashley Stokes was hungry to make amends for narrowly missing out on qualification after losing out to Andrew Rushton by points difference during the UK Open Series.

However, he was not alone as the field included Tony West, Joe Kennedy, Jimmy Walsh and Trevor Kerry all of whom played in the World Finals last season and were desperate for another chance.

Group 1 saw Ashley Stokes start his bid for victory by winning all his games, but he didn’t look entirely comfortable in his group, losing a leg against Shaun Murray and just winning a tight three legs against the ever-dangerous Fred Dove. Andrew Portlock and Mick Borshell filled 3rd and 4th spots.

No 2 seed Luke Walsh looked good in his group coming through comfortably winning all his games in straight sets, with Vidal Graham finishing clear second ahead of Glen Johnson and Stephen Williams.

Group 3 proved highly eventful, with Keith Baker producing the biggest upset in the group phases by beating No 3 seed Joe Kennedy 17-15 in the deciding leg. Robin Honey had his best tournament to-date with a great win over Keith Baker in the final group game to take second spot relegating Baker to fourth position and promoting Joe Kennedy to the top of the group.

Jimmy Walsh eased his way through Group 4 with English no. 9 Mike O’Driscoll in second and Paul Steele grabbing third spot ahead of Jason Wong.

Trevor Kerry, the local sandpaper bat hero and No 5 seed, started his quest for the title in Group 5 with a comfortable group success, while Colin Watson held off Clifford Scott for second and third respectably.

Group 6 looked strong with Richard Hutchinson being taken on by the excellent Craig Feargrieve and top table tennis defender Matt Squires. Hutchinson has shown improvement throughout the year and duly stamped his mark on the tournament with an impressive victory over Feargrieve and took out Squires with an assured attacking display. Feargrieve finished in second place after a solid win against Squires.

Jojo Senorin was top seed in Group 7 but came up against a rejuvenated opponent in Tony West who did so well in last season’s World Championships. West took control of the game and his strong forehand hitting was too much for Senorin as he won in two straight games.

Group 8 seed Gareth Herbert, a previous English no. 2 showed his class with a comfortable group success and sent a warning to the rest of the field that he was a big contender. Jason Jones again played solidly and took second spot.

The drama really began in the knockout rounds as top seed Ashley Stokes played Gareth Herbert and it was Herbert who took the initiative, taking the first 15-11. Stokes bounced back to win the second comfortably, but in a massively tense last leg it was Herbert that dictated and broke Stokes’ qualification dream winning 15-11 in the decider.

In the second quarter-final, Jimmy Walsh looked good and despatched Trevor Kerry 15-6 in the first leg, but Kerry dug in with his defensive play and picked Walsh off with some fantastic smashes to take the second and third legs 15-6, 15-2 and book his place in the semi-finals.

Joe Kennedy was favourite against Richard Hutchinson, but it was Hutchinson who produced more winning strokes on both wings to take the first leg 15-11. Kennedy hit back with his trademark forehands and wrong footing shots to take the second, however Hutchinson was not to be denied and after making a good start to the deciding leg he cleverly absorbed Kennedy’s attack and out pointed his opponent for a deserved victory.

Tony West was showing all the signs that he meant business and took the first leg against Luke Walsh with some fantastic blocking and flat hitting. The second leg was incredibly tight and after some fantastic rallies Walsh just managed to take it to the decider. Walsh then seemed to gain confidence and finished West off 15-9 in the decider.

The semi-finals produced the match of the day between Gareth Herbert and local hero Trevor Kerry. Herbert forced the pace hitting strong forehands with Kerry defending and absorbing the pressure. Herbert took the first and was looking good for victory, but somehow Kerry raised his game and with his dogged defending and occasional hitting managed to take the second leg. The deciding leg was a classic with both players giving everything in the pursuit of the WCPP English Title and World Finals qualification. Herbert heaped the pressure on with great attacking play, but Kerry showed what a great sandpaper player he is taking the final leg 15-8.

The final was an incredibly tense and tight affair with both players desperate to win the title and take the coveted spot at the World Championship Finals. Hutchinson took the initiative attacking his opponent, but Kerry’s defence was excellent and with his ability to counter–hit he picked off Hutchinson to take the first set 15-13.

The second leg played out in similar fashion and with the score at 11-10 Kerry chose to use his ‘Double Point’ ball, which he duly won to go 13-10 and be just two points from victory. Hutchinson, renowned for his fight spirit and never say die attitude, hit back with his own double point, but Kerry was smelling victory and went 14-13 up to hold match point. Kerry’s match point really was the turning point, he forced Hutchinson off the table and had a cross court smash to take the title, but missed by the narrowest of margins. Hutchinson seized the moment and proceeded to take the second leg 16-14 and set up a last leg decider.

Hutchinson then found another gear and ran away with the last leg winning 15-10 and deservedly took the English Ping Pong crown and qualification slot for the World Championship Finals in January 2014.

To see the full results from the WCPP English Closed at Draycott click here.