Hunter-Spivey and Wetherill on the podium in Korea 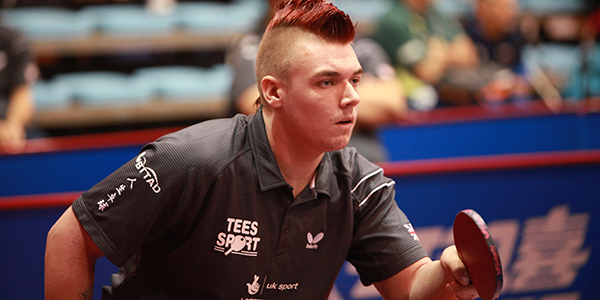 Jack Hunter-Spivey won silver in the men’s class 4-5 singles today at the PTT Korea Open and there was further success for the GB Para Table Tennis Team as David Wetherill took bronze in men’s class 6.

Hunter-Spivey finished second in his group to progress to the knockout stages and then beat Kim Ki-Young from Korea 3-0 in the quarter-final and another Korean Kim Young-gun 3-1 in the semi-final to reach the final.

The 20 year old from Liverpool won the first set against Wanchai Chaiwut from Thailand and had chances to win a close second but eventually lost the match 3-1.

“I feel I have had a really good singles tournament and I am playing well,” said Hunter-Spivey. “To finish with a silver medal in a strong tournament is a good feeling. I’ve learned a few valuable lessons I need to work on for the team event.”

Wetherill, from Torpoint, comfortably won his group and beat Kim Sungil from Korea 3-0 in the quarter-final to set up a meeting with Peter Rosenmeier, the world No 2 from Denmark. Although Wetherill led 2-1 and then 9-5 in the fifth he could not quite close it out and it was the Dane who went through to the final.

“I’m delighted to have made the semis this week,” said Wetherill.  “I haven’t been fully fit, so I’ve played well in the circumstances.”

Thomas Matthews was up against three Koreans in the round robin men’s class 1 singles and after losing close matches to Lee Jun Gi and Cho Jai-kwan the Welshman beat Park Sung Joo 3-1 in his final match to take third place.

“It’s been a strong class one event with three Koreans playing,” said Matthews.  “I had good chances to beat the No 1 seed in the tournament; it’s a shame I couldn’t finish that one off but felt I played well.”

The tournament continues with the team event which concludes on Sunday.