How our Club of the Year benefitted from Be TT

Portishead Table Tennis Club picked up the prestigious Club of the Year award at the recent Pride of Table Tennis Awards. Find out how the club helped transform itself with the help of Table Tennis England’s Be TT programme. 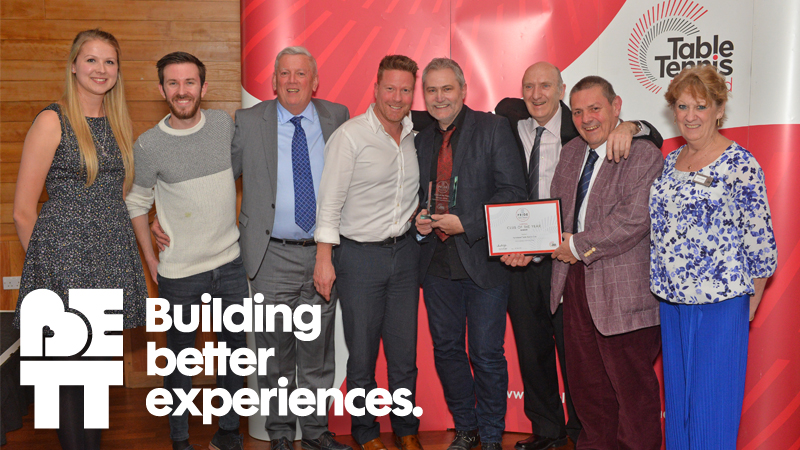 It’s 2016. A small group of middle aged men are playing on a single table tennis table in an old, run down hut in the coastal town of Portishead. There’s not a single junior player in sight and there’s only one female member on the books. There are no coached sessions, no committee and no club kit. This is Portishead Table Tennis Club.

Fast forward to 2019 and that hut has been joined by a sports hall with a 16-table set-up, junior members are now in double figures and two of its teams have taken the Division 1 and Division 2 titles in the 2018–2019 National Junior League in Bristol – an achievement assisted by the club’s five qualified coaches.

The club has expanded in the community – they’ve helped to kit out a local youth centre and run a weekly training session there, and they’ve set up an after school club which has over 30 juniors attending on a weekly basis.

They entered the most teams into both the Bristol Winter and Summer Leagues and, for the first time in the club’s history, a team entered the British League.

The table tennis club has transformed itself into a thriving community club – and key members of the PTTC Committee can be seen standing on stage at Table Tennis England’s annual Pride of Table Tennis Awards picking up the prestigious Club of the Year trophy.

So how, in less than three years, did they transform themselves?

The seed of our growth came through the excellent work of my colleague David Grounsel.

Historically the club was just happy to roll on as was, so Dave took it upon himself to qualify as a Level 2 Lead Coach and set up his own privately run table tennis sessions.

From small beginnings the numbers started to grow and it became very clear that we had a local community ready to get involved in table tennis.

When I became involved in the club as an official – I was already a player – I started the process of getting all our basics sorted out first: insurances, club constitution, a Facebook group, club kit, and getting the committee working.

It was during this time that I was made aware of the Be TT programme via our local Table Tennis England representative at a Bristol League meeting.

It was a no-brainer for me in that the club needed to be part of this programme, we had nothing to lose apart from a bit of our time so I quickly applied and we were accepted.

So how have Table Tennis England and the Be TT programme helped us in our progress? I have identified some key areas:

In year one we were able to get seven members through the Level 1 Session Coach award thanks to a grant to help fund the costs. We wanted to offer coaching to our members and wanted to be professional and consistent in what we did. Without this support from Table Tennis England, I do not think we would have achieved this.

I was made aware of Table Tennis England’s Ping in the Community scheme and before long we had a brand new table and equipment installed in the local youth center and kick-started a regular Monday night training session that carries on today. One of these juniors now plays for the club in our local junior league.

After establishing ourselves in a local school sports hall for our club training, it was an obvious decision to see if we could set up an after-school club. Before too long an agreement was in place – the club would provide the kit for free and the schools’ Head of PE, Emma Rose, a Level 2 qualified coach, would lead the sessions, assisted by our coaches when possible. Table Tennis England provided us with funding to purchase some more tables to meet with the demand of the sessions. We regularly get over 30 juniors attend on a weekly basis and some of these juniors are coming to the club’s evening sessions as well.

Having previously never entered a junior team in a junior league before, our juniors recently won both the Division 1 and Division 2 titles in the National Junior League in Bristol.

Our juniors are also lucky to be able to work with Nick Davidson who is the head coach at the SGS Sports Academy in Bristol. Nick was awarded the Coach of the Year for the South West Region and his work is greatly contributing to the success and development of the local juniors.

In year two of the Be TT scheme, we were supported in our club v club competition format by receiving funding to purchase more kit to enable us to run it on our regular club training night. The club v club idea aims to get local clubs to build teams of between 6 and 12 players and compete against us in a number of invitational challenge matches. The biggest event we have staged so far was a 12 v 12 match against Cheslyn Hay TTC.

We have created a really solid match format for the event and with team entrance music and a few beers at the end, it has proved to be a great addition to what we do.

We also signed up to Table Tennis England’s Young Ambassador Programme, which aims to get juniors more active in running clubs. We signed up four juniors – one of whom just reached his 30-hour milestone.

Two of the juniors are working as coaching assistants at the youth club sessions and one of the ambassadors is now on the club committee and is organising a club tournament.

As well as all the above, we have also achieved a few other things:

To find out more about Table Tennis England’s Be TT programme click here or to read case studies on how its been benefiting clubs and leagues, click here.

Membership fees help us fund vital work at a grassroots level in this sport, including providing an opportunity for clubs like Portishead to tap into the expertise and time of our staff, through programmes such as Be TT.

These fees help us safeguard the future of our sport and help the game grow. That’s why we say that when you buy a membership with us you become more than a player – you become part of a bigger picture. To find out how affiliation fees support you and the sport you love, click here.