Hosts England off to flying start

England boys swept through every match 5-0, while England girls are also unbeaten after the first two rounds of matches at the Butterfly Schools International Championships. 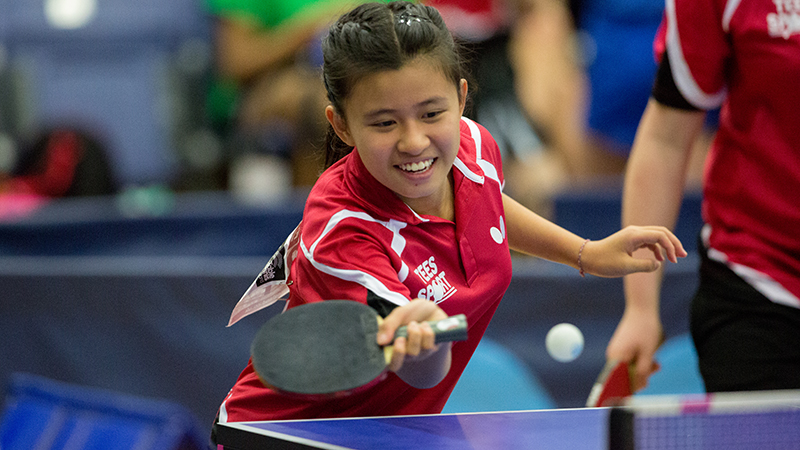 England boys swept through every match 5-0, while England girls are also unbeaten after the first two rounds of matches at the Butterfly Schools International Championships.

England boys were unassailable as their three Senior teams picked up four wins between them, the two Intermediate teams each won their only match of the day by a whitewash and two Cadet teams won four matches between them.

Seniors Josh Bennett and Israel Awolaja did not drop a game for, respectively, the A and C teams. Something will have to give in the first match of Saturday however, as the teams are in the same group and meet at 9am. Ireland A won two matches 4-1 and will also aim to be in the mix to go through to the gold medal match.

In the Intermediate Boys, the two England teams dropped only one set in their two 5-0 victories – Sam Chesterman & Thomas Rayner winning their doubles 3-1 for the B team against Ireland. Jersey and Scotland B also look strong, having picked up two wins apiece to top the two groups.

The Cadet boys were almost as impressive, the A team (Ben Hee, Naphong Boonyaprapa) winning every individual match 3-0 and the B team (Ryan Choong, Ben Piggott) dropping only two sets, both against Scotland A.

In the Senior Girls, England B (Rachael Scott, Amy Blagbrough) won their only match 5-0 against Scotland B – Wales A top the group following two 5-0 wins and they meet England at 9am on Saturday.

England A won 3-2 over Ireland and 5-0 over Scotland B – Thuy Linh Cashman of Ireland winning her two matches against Naomi Lau and Natalia Ianau.

In the Cadet Girls, England A (Mari Baldwin and Sandy Choong) were untroubled by Ireland and Isle of Man. In the other group, England B had one match and overcame Wales 3-2. Erin Green and Raquel Sao Pedro both won their opening singles matches, but doubles defeat and a reverse for Green saw Wales peg it back to 2-2. Sao Pedro clinched it with a 3-0 win over Bethan Jones.