The second Jarvis Sports Horsham Spinners TTC 2 Star of the 2017-18 season at the College of Richard Collyer, Horsham. There was an entry of 57 players for this one. 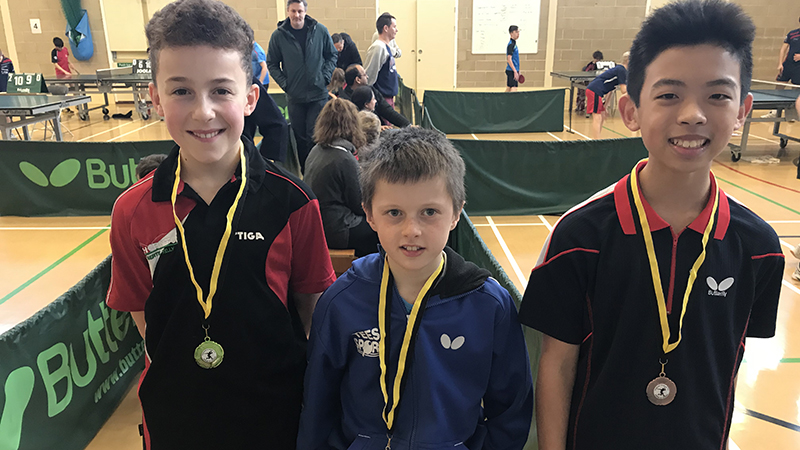 The second Jarvis Sports Horsham Spinners TTC 2 Star of the 2017-18 season at the College of Richard Collyer, Horsham. There was an entry of 57 players for this one.

The U12s, U14s and U16s were played in the morning and the U13s, U15s and U18s in the afternoon. Bertie Kelly (So) excelled to win both of his age groups, while two others, Valerio Bucci (Mi) and Ollie Maric-Murray (Sy), won a gold and a silver each.

There were 10 players in this age group in two groups. The groups proceeded without any big upsets. In the semi-finals top seed Joe Hunter (Mi) beat Sayan Jetha (Mi) 3-0 and Eduard Lakatos (Ha) upset No 2 seed, Troy Williams (Ha) 3-1.

There were 18 players in this category in five groups. All of the seeds won their groups. In the quarters Maric-Murray beat Jetha in three, Octavian Aparaschivei (Mi) beat No 4 seed Abbie Hurley (K) in four, Ben Poulter (Ha) beat Max Wilson (Sx-Brighton City TTC) in five and Harry Yip (Sx-Horsham TTC) beat Lakatos in four.

In the semis, Maric-Murray beat Aparaschivei 3-0 and Yip beat Poulter 3-2. Maric-Murray went on to defeat Yip 3-1 in the final. Poulter won the bronze medal match in straight sets.

This consisted of 25 players in seven groups. At the group stage Sajad Ali (Mi) had a couple of good wins to come second in his group and there was a mini upset when seventh seed, Henry Maric-Murray was defeated by the eighth highest player, Barney Mindlin (Mi).

Kelly took out Yip 3-1 in the semi-final and Maric-Murray won in three vs Poulter in the bottom half. Kelly was too strong in the final, winning in straight games. Yip won the bronze medal in three. Leo Sochor-Grethe (Mi) beat Isaac Egginton (K) 3-1 in the consolation final.

20 players contested the U15s in five groups. Every match at the group stage went according to ranking. In round 1 Jodie Morris (Sx-Brighton City TTC) did well to push Mihnea Dascalu (Mi) to five sets.

The final was a very close three-setter, which Kelly won 17-15, 15-13, 11-8. Evans had a number of game points in the first two games. Graham-Adams won the third/fourth place play-off vs Chung 3-0. In the consolation final Mindlin overcame Ollie Nutting (Sy) in a close five-game match.

16 players took part in the U16s in four groups. In Group 1, the top seed Will Michell (Sx-Horsham Spinners TTC) struggled to find his form, only beating Alessio Marrocco (Sx-Brighton City TTC) in five sets and losing in four to Dascalu. In Group 2, second seed Graham-Adams scraped the win 12-10 in the fifth vs Norman.

In Group 3, third seed Alejandro Ito-Aramendia surprisingly lost all three of his matches in a very strong group. Chung won the group with Natalia Ianau (Mi) in the runners-up spot and Hunter third in the group. In Group 4, Strang achieved a max win over Evans in straight sets and also beat the higher ranked Ed Cozens (Sx-Horsham Spinners TTC) 3-2. Cozens also lost to Evans in five.

In the quarters Norman knocked out Dascalu in four, Bucci overpowered Ianau in three, Chung eased past Strang 11-9 in the fifth and Michell beat team-mate Graham-Adams in four. Bucci then beat Norman 3-1 in the semis, while Michell accounted for Chung 3-1 in the bottom half.

There were just 10 players in the U18s in two groups of five. In Group 1 Billy Keegan (Sx-Brighton City TTC) beat the higher ranked Ito-Aramendia to get second place in the group after top seed Will Michell. Group 2 was won by the unranked (at the time) Reiss Vydelingum (Sy), who beat second seed Will Poulter (Ha) 11-8 in the fifth leg and Bucci 3-1.

The next cadet/junior two stars in Sussex will be on Saturdays 21st April and 12th May, both at the Triangle Leisure Centre in Burgess Hill. Entry forms are available on the Table Tennis England website.