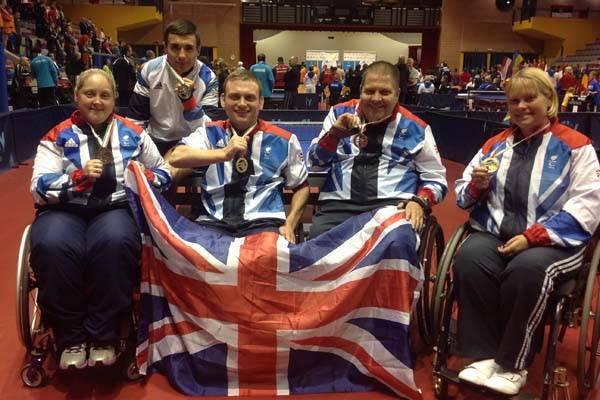 Britain had never had two players in the final of the same event before and it was former rugby player Rob Davies who came through to take the title 3-0.

The 29-year-old from Brecon has used the disappointment he felt after London 2012 to drive him on this year and earlier in the day he was hugely impressive in beating the Paralympic champion and world number one Holger Nikelis from Germany 3-0 in his semi-final.

Davies said: “I haven’t beaten Holger very often and I haven’t beaten him in a while so it was brilliant to finally beat him.  He was the person I followed when I first started – he was my idol – so to beat him in the semi-final of a European Championships is amazing and I’m so happy.”

He understandably had mixed emotions about playing his teammate and great friend Paul Davies in the final.

“It was very hard to play Paul in the final – he was the person who first trained me so it was a bit emotional to be honest but I’m glad we both got there. To have to beat him in the final was not a nice feeling but I’m really happy and hopefully Paul and me can take it through now to the team event and get gold for us both.

“It feels amazing to be European Champion although it hasn’t really sunk in yet. I’ve beaten all the guys who are ranked above me now this year so I’m very proud and pleased – my family are going to go mad back at home. My nan has been texting me which is a bit strange as she shouldn’t really know how to text!”

North Cornelly’s Paul Davies was involved in a titanic semi-final battle against the crowd favourite Andrea Borgato from Italy. Having lost the first two games he saved match points in the fourth before taking it 15-13 and then clinched the match 11-8 in the fifth.

“That was a huge battle being 2-0 down against Borgato who had beaten a former Paralympic champion,” said Paul Davies reflecting on his semi-final win. “I was starting to get nervous but I’ve been 2-0 down before and come back and won it but I had to pull everything out of the bag for that. Going in to the third end Borgato started making some service errors and I just capitalised on that by shouting at him – sometimes you have to use psychology as well as skill.”

After the final the Paralympic bronze medalist paid tribute to his younger teammate.

“I said before this tournament if anyone deserved it Rob did – it was me that got him involved in table tennis and he’s worked hard.  He had a big shock in London as we all expected him to do better but he’s gone home and reflected on how he played there and he’s come here and he’s annihilated everybody. If I had to lose to anybody it would be Rob Davies and the better man won today.”

Bayley made a heroic attempt to retain his European title and started the day with a 3-0 win over the tricky Ben Despineux from Belgium in the last 16. He then set up a semi-final against the world number one from the Ukraine Maxym Nikolenko with a 3-0 win over the German number two Thorsten Schwinn. The 25 year old from Tunbridge Wells played superbly against Nikolenko, taking a 2-0 lead and coming back from losing the third 12-10 to win the match in the fourth.

In the final he faced another Ukrainian Mykhaylo Popov, the former world number one, and despite making a great start it proved one match too many. As always Bayley went down fighting but lost the match 3-1.

“It was really nice to beat Nikolenko in the semis,” said Bayley, “as he’s beaten me a few times so it was really nice to win that match. It was hard to play the final so soon afterwards as I’ve played lots of matches today and I was quite tired but Popov played really well and he deserved to win so no excuses.

“I was flying at the start and I don’t know what went wrong really. He knew he had to go for it in the last three sets and everything he hit was going on the table. He hit some great balls to be fair. That’s table tennis.

“I think I’ve proved again that in the big tournaments I can do the business and three major finals in a row is really consistent so I’m proud of myself for that. I’ll keep working hard and hopefully for the world championships next year I’ll be better than I am now.”

Sara Head, from Beddau, had recovered from a 2-1 deficit in her quarter-final against Nergiz Altintas of Turkey to win a tense fifth and final game 14-12 on her third match point. In her semi-final she took a 2-1 lead against the double European gold medalist from France, Fanny Bertrand, and had a match point at 10-9 in the fifth but could not clinch the point and lost the game 11-13 and the match 3-2.

“I was thrilled with my quarter-final,” said Head. “Lady Luck was on my side and I was just so thrilled to have won it and get into the semi-final of a major championship, which is a fantastic achievement. My goal was to fight – as long as I give it my all and I can come away knowing that I’ve given it everything.

“In the semi-final she had the luck and she had the edge to finish the match. There were only two points in it between being in the final so I’m thrilled and I’ve gained a lot of experience from it. I can’t wait for the team competition on Wednesday but I’m looking forward to a bit of rest first.”

Barnsley’s Sue Gilroy faced the London 2012 silver medalist and double European champion Borislava Peric-Rankova from Serbia in her semi-final and came heartbreakingly close to the final. She made a great start by winning the first game and then fought back to level the match after losing the next two. She had her chances in the final game but went down 11-7 and had to settle for a bronze.

“I’m desperately disappointed,” she said afterwards. “I gave it everything and really thought I could beat her this time but I have to be proud of a bronze medal.”

Sheffield’s Kim Daybell (class 10) won his final group match 3-1 against the talented young Filip Radovic from Montenegro to top his group. The 21-year-old, who is studying medicine at Leeds University, started well in his quarter-final match against the experienced Jorge Cardona of Spain, the Paralympic team bronze medalist, and had chances to win the first and third games but made too many errors in a disappointing 3-0 loss. He still has the opportunity to take a medal in the team competition in which he will partner Ashley Facey-Thompson.

Having won his group Aaron McKibbin (class 8) was unlucky to be drawn against the former world champion and London 2012 silver medalist Richard Csejtey from Slovakia in the last 16 as the veteran of four Paralympic Games went through to the knockout stages as a runner-up. The 21-year-old Londoner played well and had his chances but eventually lost in three close games. Nevertheless it was a good performance by McKibbin, who is improving steadily and competing well against the top players in the world.

Development squad player Felicity Pickard (class 6) also put up a great performance in defeat to the former European bronze medalist from Germany, Stephanie Grebe, in her final group match, fighting hard in a 3-2 loss. The 19-year-old from Burnley, competing in her first major championship, is a great prospect for the future and is also showing that she can compete with the best in her class.

“It’s been a very good day,” said GB Performance Director Gorazd Vecko, “and we can look forward to the team competition when we also have a great chance of taking some medals.”

The team competition starts on Wednesday.