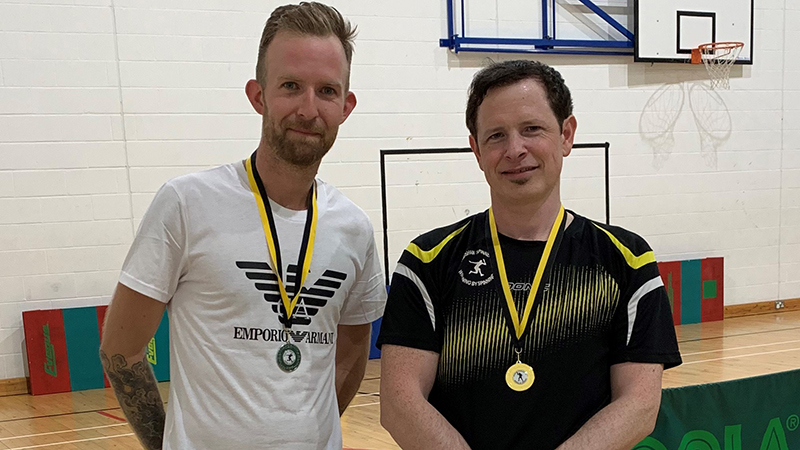 As there were only nine players in total, (two seniors and seven vets), only one age group was run (effectively a senior event).

Top seed Rory Scott (IRL) won all eight of his matches, as expected, only using his long pimples bat in the two decisive matches against the second and third best players, Graham Beaney (Sx) and Juan Munoz-Lopez (Sx). He dropped five games in total, but beat Beaney in straight games.

The battle for second place was won by Beaney, who came back from 1-2 down in games against Munoz-Lopez (and was also down in the fourth) to win 3-2. He only conceded one other end, to fourth placed Bassam Mocharrifie (Bu), in his remaining six wins.

Munoz-Lopez matched Beaney’s achievement in his six wins, only losing one end. Bas came fourth with four wins. Two of these were five-setters versus Simon Pells (Bu) & Tom Kinga (Sx). Pells, who extended Scott to five games, also won four, but came fifth, as he lost to Bas.

Paul Pells (E) (brother of Simon) won thrice and finished sixth. Simon got family bragging rights, as he overcame Paul 11-9 in the fifth and he also edged out Bob Watson (Sx) in five.

Watson finished seventh with two wins in five over Kinga and in three over Colin Barham (E). Barham and Kinga both won one, but since Barham defeated Kinga, he came eighth and Kinga, whose one win was in the fifth against Paul, was ninth.