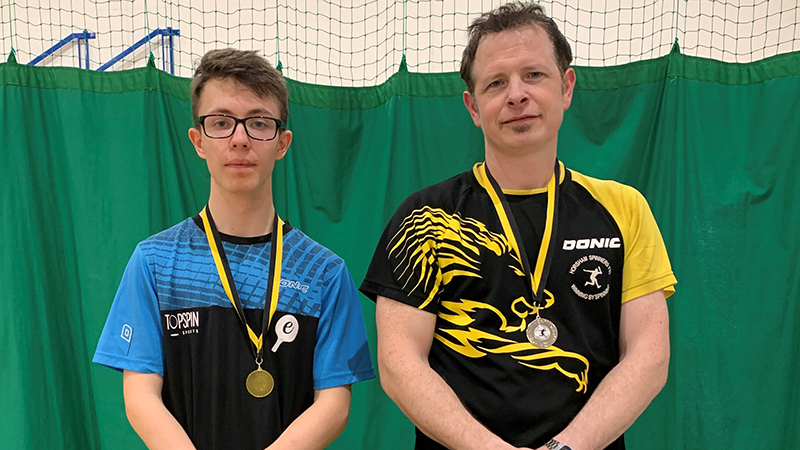 There were nine players in the vets and 11 players in the seniors in a round-robin format, so everyone got plenty of matches. Four keen (or mad as some might say) players took part in both vets and seniors and therefore played up to 18 matches on the day. 16-year-old Jacob Evans (Sx), only the third ranked player, won the Senior event, at his first attempt. Favourite Rory Scott (IRL), won the vets.

Top seed Scott won all eight of his matches to emerge the winner, but was pushed close by second seed Phil Snelson (Sy) in a close four-game match 7-11, 11-9, 12-10, 11-8. Snelson comfortably won his remaining matches to get the silver medal.

Roger Pingram (K) came third, with six straightforward wins, while Bob Lowe (Sx) finished fourth with five victories. He just got over the line 15-13 in the fifth vs Tom Kinga (Sx) and overcame Sue Pingram (K) in five games too. These were the only five games matches in the event.

Kinga was fifth with four wins and Stephen Nelson-Smith (Ha) was sixth with two wins. Alison Jordan (Sx) also had two wins but finished seventh, as she lost to Nelson-Smith. Sue was unable to finish her matches, due to an injury, and had to give four walkovers.

No 1 seed Scott won his first nine matches, only dropping two ends. HIs last match was looking good too, as he led 2-0 in games against Evans, but Evans had other ideas and came back to win the next three games 11-6, 11-8, 11-9!

Evans had earlier lost to fourth seed, Graham Beaney (Sx) in four games. However, as Beaney had lost to both Scott and second seed Alan Taylor (K) in five games, he was out of the running for the medals. Both Evans and Scott had nine wins each, but Evans got gold as he beat Scott.

Beaney came third with eight victories, while Taylor was fourth, with seven wins. Taylor had suffered an unexpected 3-1 loss to Abdur-Rahman Kelani (K). Kelani and Roger Pingram both had six wins, but since Pingram defeated Kelani (in four well contested ends), he came fifth and Kelani was sixth. Kelani also overcame Sue Pingram in five.