Part two of our review of the year looks at the biggest stories of 2018, including Commonwealth Games gold. 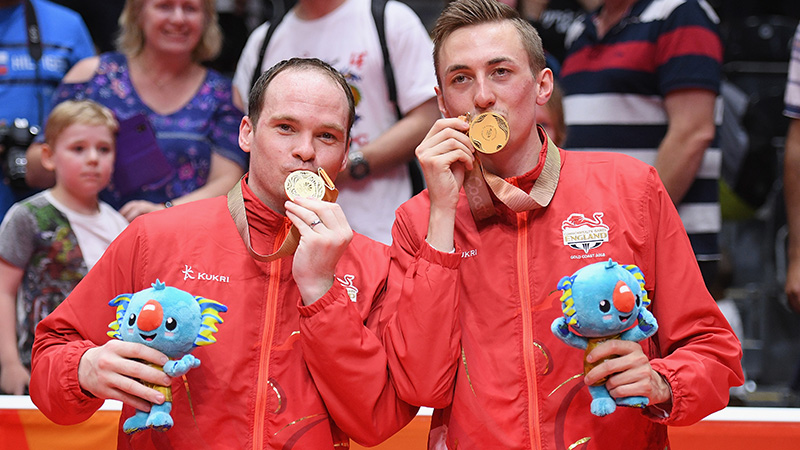 Commonwealth Games gold, Team World Cup bronze, a para world champion and a player into the world’s top 20 with a string of impressive victories – it’s fair to say 2018 has been an exceptional year for English table tennis.

Part one of our review of the year covered the London-hosted ITTF Team World Cup, Here, we look at everything else making the news this year.

Chris Doran was England’s best performer at the World Championships of Ping Pong at Alexandra Palace, reaching the semi-finals.

Meanwhile, the influence of table tennis reached the corridors of power when our Young Ambassador Hugo Ursell took on his local MP Sir Roger Gale.

Into March, and Liam Pitchford and Tin-Tin Ho were the headline winners at the PG Mutual National Championships, where we also presented the worthy winners of the Pride of Table Tennis Awards, which honour the unsung heroes who put so much into our sport.

They were not the only local stars in receipt of honours in the month as Bev Scott-Johns of New Milton TTC in Dorset and Vernon Hughes from Yatton Keynell in Wiltshire were presented with a prestigious Torch Trophy Award by the Duke of Gloucester at an awards dinner in London.

And seven-year-old Jamie Myska-Buddell from Joola Plymouth TTC hosted his own national radio show, sharing his love of table tennis in an episode of CBeebies’ Sporting Superstars.

April was all about Australia for England’s leading players as they competed at the Commonwealth Games in Gold Coast. And it was England’s most successful Games from a table tennis point of view as they brought back a stack of medals.

It started with a historic first team medal for the women’s team as the squad of Kelly Sibley, Tin-Tin Ho, Maria Tsaptsinos and Denise Payet won team bronze by beating hosts Australia.

And the men’s line-up of Liam Pitchford, Paul Drinkhall, Sam Walker and David McBeath repeated that feat as they bounced back from defeat in the semi-finals to also strike bronze.

Two golden days followed for team England as Ross Wilson won the para event, beating his compatriot Kim Daybell in the final, and it was followed up by gold for Liam and Paul in the men’s doubles. The medal-winning exploits were completed when Liam and Tin-Tin repeated their mixed doubles silver from four years earlier.

For Kelly Sibley, it was a memorable finale to her England career as she announced her retirement after the Games.

Back on home soil, there was a royal opening of the new Greenhouse Centre as Prince William and Prince Harry cut the ribbon and enjoyed a game of table tennis at the eye-catching venue in London, which was refurbished with the aid of a £100,000 grant from Table Tennis England.

The England players were still on the road, this time heading to Sweden for the World Team Championships, where they caused what the ITTF described as one of the biggest shocks of all time when they beat Japan 3-1, led by Liam Pitchford’s two victories. The No 3 team in the world, Japan had combined world rankings of 33, while Paul Drinkhall was England’s highest-placed player at No 52.

It was one of a string of impressive results for Pitchford and England at the tournament, but they just missed out on a medal on this occasion as they were narrowly defeated by hosts Sweden in the quarter-finals.

There were amazing scenes in the women’s competition, when North and South Korea, who had been due to meet in a quarter-final, declined to play each other and instead combined their teams to move into the semi-finals together.

Other winners in May included Amirul Hussain, who won gold at the Cadet 6 Nations, and Urban TTC, who claimed the British League Premier Division title, while Tin-Tin Ho broke into the world’s top 100 for the first time.

June saw table tennis on the ‘red carpet’ as the film Believe That premiered. The film follows the lives of Harry Fairchild, Chris O’Flinn and Andrew Tonkin as they prepare to represent England at the European Down’s Syndrome Championships.

The trio are members of Brighton TTC, and the club was again in the news when ITTF Foundation Director Leandro Olvech visited. He spent time at one of their projects in a local prison and seeing first-hand the work they do around inclusivity in table tennis. Mr Olvech also visited the Greenhouse Centre and hailed the two projects as examples to the rest of the world.

Pam Butcher was again on the podium at the World Veteran Championships in Las Vegas, winning bronze in the over-85 women’s singles.

At the other end of the age spectrum, England swept the board in the team events at the Butterfly Schools’ Invitation International Championships, which England hosted in Worcester. There were three more golds in the individual events too.

And congratulations were in order to English umpires Dave Evans, Kim Mudge and Lester Smith, who passed their International Umpire Exams.

Liam Pitchford continue his jet-setting year in July when he was again one of the big stars competing in the Ultimate Table Tennis League in India. Unlike last year, his Falcons team were beaten in the final – though Liam was once again named the series’ Most Valuable Player.

It was also the month when Liam received universal plaudits following his decision to go public with his battle to overcome depression and anxiety, working with The Samaritans to add his voice to efforts to get people opening up about mental health to try to end the stigma surrounding it.

The fifth annual #TableTennisDay engaged with millions and was a trending topic on Twitter, as hundreds of events took place across the country and Commonwealth Games medallist Maria Tsaptsinos and Paralympic medallist Aaron McKibbin joined in the main event in Milton Keynes.

Maria was also named TASS Star of the Year – on her 21st birthday.

August saw Liam Pitchford turn even more heads with two brilliant results on the World Tour – beating world and Olympic champion Ma Long at the Bulgaria Open, before sinking German great Dimitrij Ovtcharov at the Czech Open, where he went on to reach the semi-finals.

The inspiration factor was extended by members of the British Para Table Tennis squad, who encouraged people to take up the sport in an online film for BBC Get Inspired.

On the subject on inspiration, Pride of Table Tennis Awards winner Charlotte Binley – who won in the Inspirational Story of the Year category – had more to celebrate after being called up to represent Great Britain at next year’s World Transplant Games.

Other September news included a lifetime’s contribution to school sport led to a date with royalty as former ESTTA President John Arnold MBE was presented with the Emeritus Award by the Sport & Recreation Alliance, with the Earl of Wessex handing over the prize.

The England players were on duty at the European Championships in Alicante, where Sam Walker was the most successful athlete, reaching the quarter-finals in the Men’s Doubles with Danish partner Tobias Rasmussen – the first English player to reach that stage since Des Douglas & Alan Cooke in 1990. In the singles, Liam was unlucky to run into eventual champion Timo Boll in the last 16, losing out 4-2. However, his recent results saw him hit a career high of No 31 in the world rankings.

Paul Drinkhall, meanwhile, took a step into administration when he was elected as a member of the ETTU Athletes Commission.

Liam went up again, to No 23, in October, but the headline act of the month was Commonwealth champion Ross Wilson, who fought back magnificently against the double Paralympic champion from China to take gold in men’s class 8 at the World Para Table Tennis Championships in Slovenia.

Also among the medals were Harry Fairchild, Andrew Tonkin and Chris O’Flinn, who brought back a trio of bronzes from the World Championships for Athletes with Down’s Syndrome.

The trio’s parent club, Brighton TTC, were singled out for praise by Professor Rosie Meek in her report on sport in prisons for the Ministry of Justice, after their work helped to foster better behaviour and reduced violence among inmates at HM Prison High Down.

Sam Walker was one of the star athletes on show as the venues and participating sports for the Birmingham 2022 Commonwealth Games were officially announced.

November saw Liam Pitchford gain revenge for his European Championships defeat as he beat Timo Boll 4-2 at the Austrian Open – the third recent world No 1 he had beaten in the autumn. It resulted in another World Tour semi-final appearance – he was beaten this time by China’s Xu Xin.

There was a winning Senior debut for Charlotte Bardsley as England defeated Greece 3-0 in a European Championships stage one match.

News also came through that Table Tennis England’s public project ‘Ping!’ had recorded the highest number of participants since the programme began nine years ago, with a record breaking 1.24 million taking to the tables across 25 towns, cities and counties.

Former Paralympic champion Neil Robinson, who is now an integral part of the British Para Table Tennis coaching team, was presented with an Honorary Fellowship by Bridgend College.

Finally, to December, and table tennis heard it had been awarded £275,000 by UK Sport to support athletes with a genuine qualification opportunity to reach the Tokyo 2020 Olympics, following an application to the £3 million Aspiration Fund.

And Liam Pitchford reached England’s highest world ranking since 1980 when he broke into the world’s top 20, reaching No 16 in the rankings list – a fitting finale to the year for a player who is undoubtedly our biggest headline-maker of 2018.