Gold at the double for Daybell

Kim Daybell confirmed his good form ahead of next month’s Commonwealth Games by combining with Ashley Facey Thompson and Josh Stacey to win gold in the men’s class 9-10 team event at the Lignano Master Open in Italy, to add to the gold he won in the singles. 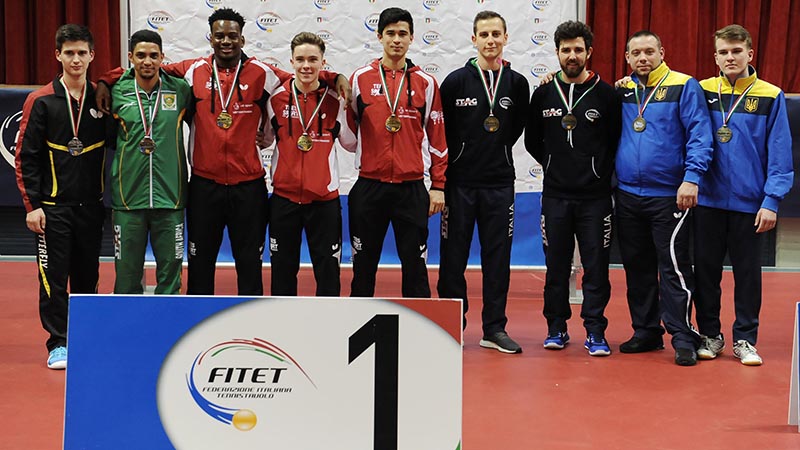 Kim Daybell confirmed his good form ahead of next month’s Commonwealth Games by combining with Ashley Facey Thompson and Josh Stacey to win gold in the men’s class 9-10 team event at the Lignano Master Open in Italy, to add to the gold he won in the singles.

Daybell, 25, and Facey Thompson, 23, took European silver in the men’s class 10 team event last year and the addition of class 9 Welsh teenager Josh Stacey to the British team now provides further strength in depth in the team event. They came through against France 2-1 and then reached the semi-finals with a 2-0 win against Russia.

A 2-1 win against Italy put them into the final against the combination of Theo Cogill from South Africa and Lion Bauer, the German who Daybell had beaten in the final of the men’s class 10 singles yesterday. After Daybell and Facey Thompson won the doubles Facey Thompson clinched the gold with a win in the first singles against Bauer.

“I’m very happy with winning team gold,” said Facey Thompson. “The team morale was amazing and it is good to have Josh on the team as well. I think I played well and hope to build on this performance in my next competition in Slovenia.”

“It’s been a good competition for me,” said Daybell. “To win any international tournament is an honour and taking two gold medals is a great achievement. It was good to play in the team with Ash and Josh – we had a good team spirit which bodes well moving forward to Tokyo.”

“Winning gold was a great finish to the tournament,” said Stacey, who will represent Wales in the Commonwealth Games. “It was good to play in a team with Kim and Ash and hopefully we will be playing together in team events for years to come.”

Matthews and his Swiss team partner Sylvio Keller recovered from an opening 2-0 loss to Italy to reach the knockout stages with a 2-0 win against USA/Romania. They combined really well to beat top seeds Korea in the semi-final which earned them a rematch against the Italian partnership of world champions Federico Falco and Andrea Borgato.

After the Italians won the doubles Matthews levelled the score with a 3-1 win against Borgato but Falco ensured a popular home victory with a 3-0 win against Keller.

“I’d like to thank Sylvio – it was great to play alongside him,” said Matthews. “I’m very pleased with my tournament overall. I played well throughout and even when I was struggling I still found a way to win matches. Not losing any of my singles matches during the tournament shows that what I am doing in training is paying off with my table tennis and fitness.

“Beating Nam (Rio bronze medallist) and Borgato was a big confidence boost for me ahead of the World Championships later this year. I’ve also learnt a lot here and know what I need to go back and work on in the training hall.”

McKibbin and Wilson are developing into a world-class partnership and they came through their group comfortably with 2-0 wins against Russia and the second Norwegian team. That gave them a bye into the semi-finals and a 2-0 win against Norway 1 set up a final against Ukraine in a repeat of the European Championship semi-final last year which world No 1 Viktor Didukh and Ivan Mai took on their way to winning gold. After a narrow loss in the doubles the British pair had to be content with silver as Ukraine went on to take the tie 2-0 and the gold.

“I’m happy to win another medal with Ross,” said 26-year-old McKibbin, “and to be in another final is always good. We were unlucky in the doubles to lose 11-9 in the fifth but with the World Championships the main focus this year we have been concentrating on singles and haven’t practised doubles very much.

“I have only lost to the world No 1 3-2 and have seen some improvements in all my matches so I’m leaving Italy on a positive note with things to build on for the coming season.”

“It has been a good competition overall,” said 22-year-old Wilson, who will also compete for Team England in the Commonwealth Games. “I feel that my level can be much higher but it is the first competition of the year so it gives me something to work towards. I want to work on some elements of my game and then I’m looking forward to heading out to Australia.”

Bayley and Shilton also topped their group in men’s class 8 team and a 2-0 quarter-final win against Russia took them through to the semi-final to face the formidable Ukraine combination of Didukh and Mai.

It proved to be the tie of the day for the British team as class 7 Bayley and 19-year-old Shilton produced some brilliant play to win the doubles and had match points to win both singles. Despite losing the tie 2-1 they were understandably delighted with their performance.

“That was the best doubles win of my career,” said Bayley, “and the best team performance overall that I have been part of. To have match points to win the tie against one of the best teams in the world shows that Billy and me can beat any team and to win the doubles is just incredible.

“Billy was amazing – it was the best I’ve ever seen him play, in both singles and doubles. There is still lots to work on but we can look forward now to the World Championships.”

“The team event was great,” said Shilton, “and I feel that we really excelled in the doubles to beat Ukraine 3-0. Will and me get on so well and I think this helps us massively in the doubles. My singles match against Didukh was great – having been 2-0 up and had two match points against the world No 1 has filled me with confidence and on the whole it has been a very good competition.”

With her GB team partner Sue Gilroy not competing in Italy, 18-year-old Megan Shackleton teamed up with Caroline Tabib from Israel in the women’s class 4-5 team event and after a 2-0 loss to Germany they reached the knockout stages with a 2-1 win against Zorica Popadic from Serbia and Jelena Sisic from Croatia.

They were no match for the Serbian combination of Borislava Peric-Rankovic and Nada Matic and the World and European champions went through to the final after a 2-0 win.

“I think I’ve had a very challenging tournament overall,” said Shackleton. “I’ve had some tough losses and struggled to find the form I know I’m capable of, but to come away with a bronze medal in the team event is definitely a positive to take back home with me.”

Men’s class 6 European team champions Paul Karabardak, David Wetherill and Martin Perry were disappointed to lose 2-1 in the semi-finals to the German combination of Thomas Rau and Tim Laue having come through their group with 2-0 wins against Israel and a combined team from Switzerland and Japan.

“Taking bronze in team was slightly disappointing for us,” said Perry, “but we worked hard as a team and gave everything. It is good to see where we are at this early in the season.

“I feel that my game is coming along nicely and I’ve had two five-set matches against the numbers 10 and 11 in the world. I was disappointed not to progress from my group in the singles – I can see where I need to improve in order to be at the level I want and I was fighting hard in every match so I can take a lot of pride from that.”

Performance Director Gorazd Vecko was happy with his team after their first competition of the season. “There is a lot to work on,” he said, “but there were some very good performances and we are on track for the World Championships.”