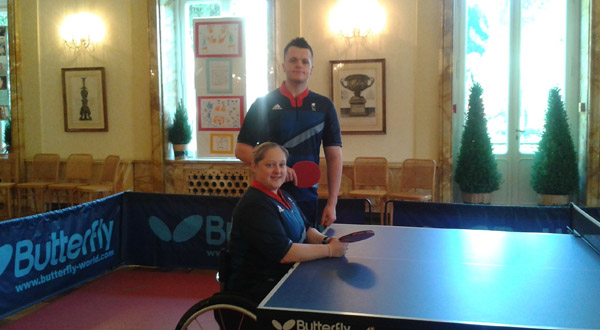 Beyond the Paralympics: Disability Sport and Technology provided an opportunity for showcasing British innovation while highlighting the success of the London Games at a time when Rome prepares to make a bid for the 2024 Olympic and Paralympic Games.

The GB team had been invited to send two athletes to take part in exhibition table tennis matches between GB and Italy at the beautiful setting of the British Ambassador’s official residence, Villa Wolkonsky.

McKibbin beamed: “I think it was very good experience, we don’t usually get to do events like this abroad and it was nice to learn a bit about how they want to move the Paralympics forward from London.

“It is good to see that people still really enjoy it and all the people we spoke to – both British and Italian – were all really amazed by how London went. It was nice to relive the memories again and to play in such a lovely venue that was very different to where we normally play. The building was amazing and Rome is a nice city so I really enjoyed it.”

Head, who partnered Jane Campbell to a bronze in London 2012, agreed: “I had a great day. It was an amazing experience and great to meet so many people and to see that the London legacy is still ongoing. Seeing the Brazilian Ambassador receiving the Olympic torch makes you think Rio is not far off.

“It is brilliant that London has had a massive knock-on effect; technology is getting better and if it keeps getting better it is only going to help people to enhance their lives so that is always a positive thing. It is always good to see new things that are happening and to experience it with some of the great people who were here today is fantastic.”

Among those present at the event were Emma Boggis, head of the Olympic and Paralympic Legacy Unit at the Cabinet Office, Luca Pancalli, President of the Italian Paralympic Committee and Alex Zinardi, former Formula 1 racing driver and London 2012 Paralympic cycling gold medalist.