Sometimes there is the most wonderful discovery and record of former times and such was the case when Bob Janes contacted Table Tennis England as he had found some old negatives in his father-in-law’s attic – taken in January 1947! 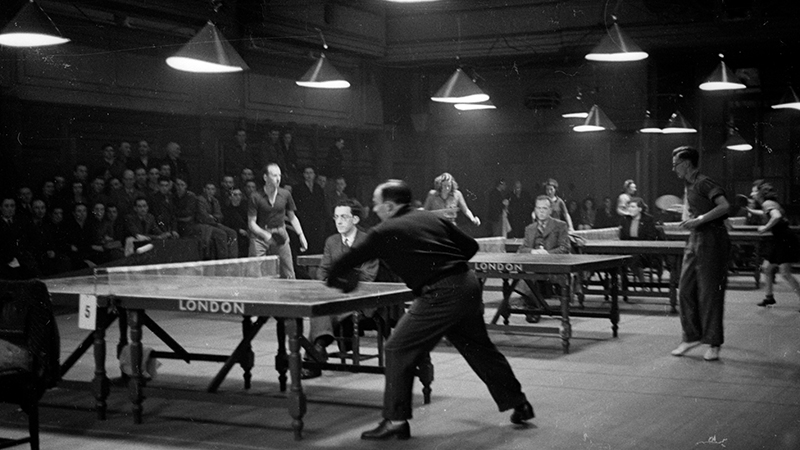 Sometimes there is the most wonderful discovery and record of former times and such was the case when Bob Janes contacted Table Tennis England as he had found some old negatives in his father-in-law’s attic – taken in January 1947!

Alan Bergman, Bob Janes’ wife Wendy’s father, had taken the photos at two events, one was the England v Switzerland match in the semi-final of the West Zone of the European Cup. The English players were captain Eric Filby who played with Ken Merrett in the doubles and Ernie Bubley and Geoff Harrower who played the singles matches. The Swiss team included Hugo Urchetti. The match was played at the Rotax Club Room, Chandos Road, Willesden, NW10.

England won the international 4-1, winning the doubles whilst Bubley won both his singles and Harrower one, losing to Urchetti. England went on to play France in the final but lost 3-2 in Paris on 14th February 1947.

The other tournament was unknown but looking through old magazines it would appear to have been the Metropolitan Open held on 4th January 1947 at The Polytechnic Extension, Little Titchfield Street, London W1. There were certainly a number of players in the photos who tied in with the finalists as listed in Table Tennis.

As more photos appeared it became more certain that this was the case and it was indeed the Metropolitan Open. The tournament was played over five days – 30th December 1946 and then 1st-4th January 1947 with finals night being on the last evening. Admission from Monday to Thursday was 1s, Friday 2s 6d and Saturday night 2s., 5s 6d. and 7s 6d.

Having seen several other photos of England players in the past it was fairly easy to identify a number of the players at the Open, the great majority being England internationals. Amongst the stellar cast were Ernie Bubley, Jack Carrington, Ron Crayden, Eric Filby and Ken Merrett and on the distaff side Molly Jones, Betty Steventon and, I believe, Pinkie Barnes.

Looking at the photos, you can almost smell the atmosphere in the hall and they are so evocative of the era. So many internationals playing in this Open and so many others week in, week out.

I hope you enjoy looking at this small selection and if you do know who any of the unnamed players are then please let me know. My contact details are [email protected]

Most of all I would like to thank Bob and Angela Janes for taking the time and trouble to scan the photos and send them on and of course the photographer himself, Alan Bergman – they are a truly remarkable record.

You just never know what you may find.