There was an extremely low entry of only 40 entrants for the Burgess Hill Grand Prix, by far the lowest entry ever in a Satellite Grand Prix in Sussex. 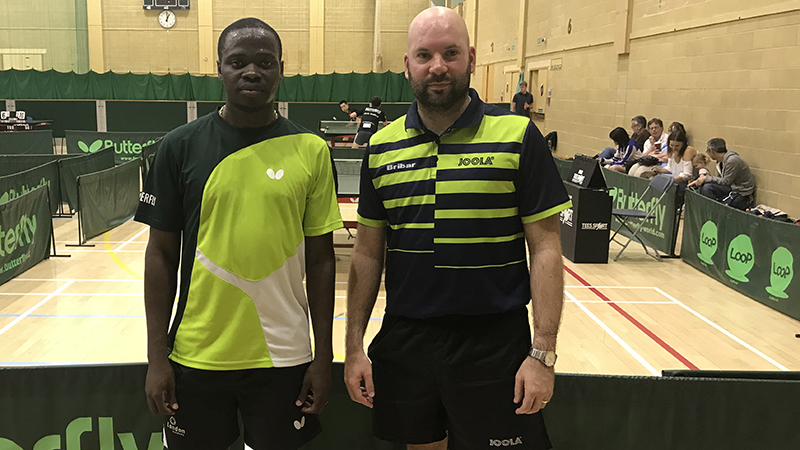 There was an extremely low entry of only 40 entrants for the Burgess Hill Grand Prix, by far the lowest entry ever in a Satellite Grand Prix in Sussex. The previous lowest entry was 68 players, which was last year, with the most being over 100.

There are always clashes with other events, no matter what weekend is picked, but the clashes this time were only some junior events and a vets’ event. Particularly disappointing was the lack of women’s entries. Only four women/girls entered, so all six of the scheduled women’s events were cancelled, although those that entered took part in the men’s events.

As well as the women’s events, the Open Doubles, the Men’s Band 1 and the Restricted Singles were also cancelled due to low numbers.

One wonders why events seem to be supported less and less over the years. It could be due to more events being run, by clubs all over the country. Anyway, other than the low numbers, the event ran smoothly and finished earlier than expected.

There were just three players in the Men’s Band 2. Top seed Rory Scott went 0-2 down in games versus Alex Ahl (Mi) in his first match, only to recover to win the next three games, the last being 11-9. He then beat Joseph Goss (Nk) 3-0 to win the band. Ahl beat Goss 11-9 in the fifth for second place.

There were 10 players in this category in two groups. Top seed Ahl won all four of his group matches in Group 1, with Daniel Pound (Sx) in second place with three wins. Finley Cameron-Prior (He) took Ahl to five and Aris Kapsanakis (He) took Pound to five.

Second seed Goss won his group, also getting four wins, but he was taken to five twice, by Pedro Santos (Sx) and by Alex Aston (Hr). Mark Collins (Sx) took second place in the group, as expected by ranking.

In the semi-finals, Ahl beat Collins 11-9 in the fifth, while Pound overcame Goss 13-11 in the fourth. Ahl took the final in four.

There were 12 players in four groups in this event. Top seed Collins won Group 1 as expected, Jack Stockdale (E) won Group 2, winning 11-9 in the fifth vs Juan Munoz-Lopez (Sx). Jack Trafford (Do), who was the bottom player on ranking in Group 4, had three unexpected wins to top the group, impressively beating No 2 seed, Pound with three 11-9 games. Pound took second place in the group. Santos took Group 4 and Cameron-Prior was second.

In the quarter-finals, Collins defeated Munoz-Lopez in five, Santos took out Pound also in five, Cameron-Prior knocked out Trafford in four and Stockdale accounted for Raquel Sao Pedro (Bd) in five.

This was the band with the highest number of entries, with 23 players in six groups. In group 1, the No 1 seed, Vadym Krevs (He), was reduced to runner-up, as he lost to 12-year-old Harry Yip (Sx), who won the group. In Group 2, there was a three-way countback and the No 2 seed, Munoz-Lopez, was pushed into second place by group winner, Simon Kempton (Sy).

In Group 3, Jacob Evans (Sx), came first, beating Jeremy Kempton (Sx) 12-10 in the fifth. Group 4 was won by the seed, with Trafford coming first in a two-way countback with Brandon Bennett (Sx), Stuart Vincent (Sx) getting a good win over Trafford 12-10 in the fifth.

Alan Stone (Sx) won Group 5, getting a good win over the seeded Sam Clarke (Sx). Group 6 was the only group where the seed won all three matches, as Sao Pedro won.

In the quarters all matches were four games, with Clarke beating Yip, Sao Pedro beating Evans, Trafford beating Krevs and Kempton beating Sophie Barcsai (Do). Sao Pedro scraped over the line 11-9 in the fifth in the semi versus Clarke and Trafford won 3-1 against Kempton. Trafford won the final in four.

There were 20 players spread across five groups in this band. Top seed Clarke did justice to his ranking, with three wins, but only just overcame defender Bob Lowe (Sx) 13-11 in the fifth and Ajay Shah (Sy) 11-6 in the fifth. Second seed Stone was unfortunate not to progress from his group, with two fifth-end losses to John Strang (Sx) and Bennett. Strang beat Bennett 3-0 to top the group.

In the quarters, Bennett knocked out Clarke 3-0, Evans accounted for Cosens 3-1, Yip had a good win over Lowe in 3-2 and Strang accounted for Strang 3-1. In the semis, Evans took out Bennett in three and Strang knocked out Yip in four. Evans took the early lead in the final, winning the first two games, but was pegged back to the fifth game, which he won 11-7.

There were 18 entries in this event, divided into five groups. Four of the five seeds won their groups, the exception being fourth seed Goss, who lost to Santos 3-2.

The final was a nailbiter, with the momentum shifting from player to player. Bryant lost the first game from 10-7 up, won the next two by two points, but then lost the fourth 11-6. The writing looked to be on the wall as Bryant again led 10-7 in the fifth, with two serves to come at 10-8, but he missed out, losing 15-13 in the final end.

This had seven players and two groups. Top seed Scott suffered a maximum loss to Chris Pullinger (Sy), but still won Group 1 in a three-way countback, as he defeated Lowe 3-0. Lowe came second in the group, with Pullinger third.

Unranked Vincent, in his first ranking competition for umpteen years, won Group 2 with a good 3-2 win over second seed, Shah. Alison Jordan (Sx) also excelled to defeat Shah under the guidance of Vincent.

In the semis, Scott defeated Jordan 3-0 and Lowe defeated Vincent in three close games. The final was unlike the group match between Scott and Lowe, where Scott had won comfortably, as the players took turns winning easy games. That was until the final game where the rallies became extended, both players being cautious, with Scott eventually getting over the line 16-14 having faced three match points, despite being almost 30 years younger than his opponent.

There were two groups and nine players in this event. No 1 seed Wright won Group 1 as expected, with Trafford in the runners-up position and Goss won Group 2, overturning the rankings on Ahl in three straight games. Ahl came second in the group, but only just, as he won in five against both Emms and Strang and was 2-8 down in the decider versus Strang before winning 13-11.

In the semis, Ahl had a good win over Wright in four and Trafford pushed Goss all the way to 11-9 in the fifth. Goss won the final 3-1.