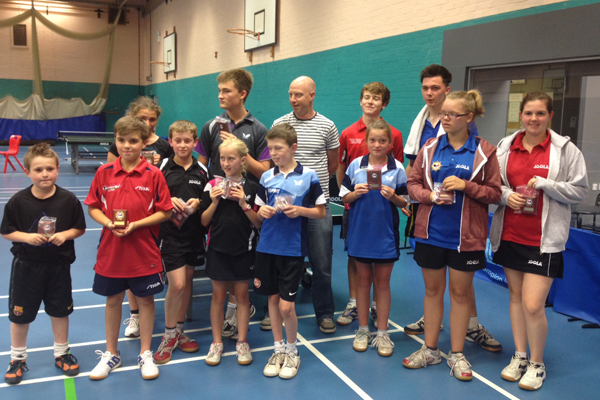 This gave local junior players the opportunity to compete against other juniors from across the region and country in the first national junior event of the new table tennis season.

Despite the time of year the event was extremely well supported with some very experienced players entering the tournament with high expectations to earn crucial England ranking points early in the new table tennis season. The entry included players as young as 8 years old competing in a tournament for the very first time. The event was divided into four age groups split between boys and girls in under 11,13,15 and 18 age groups.

The tournament was also the culmination of the first ever residential table tennis training camp held in Plymouth at the new facility, which was organised by Plymouth based ETTA regional coach Paul Whiting, assisted by local coaches Kevin Buddell, Darren Reed and Mike Hugh.  Sparring was also on offer with Andy Millman and Eric Cheng assisting.

Over twenty local players of all age groups took the opportunity of the 3 day training camp to prepare and work on their game prior to the tournament. How beneficial this proved, as nearly all the titles were won by the children who attended the training camp. This was testament to all of their hard work and endeavour, training for over six hours a day. Whiting commented on all their excellent performances which simply would not have been possible without the building of the ETTA funded facility which is now challenging to become one of the very best table tennis facilities in the country. He hopes to run similar training camps in the future.

The most notable successes were at under 11 and 13 age groups with Stanley Shilton winning the under 11 boys title and local player Ben Edmunds winning his first open title in the boys under 13 age group. Okehamptons’ Emily Haskell took the under 13 girls title with Emily’s training partner Zoe Bennett runner up.  Special mention must go to Plymouth’s 11 year old Francesca Maestri who pushed Emily closely and showed a vast improvement following her hard work at the 3 day training camp.

The under 15 age groups saw Carl Baldry upset the seeding by beating Ed Haskell in the boys final and Holly Johns taking the girls under 15 title beating Emily Haskell in the girls final, both proving to be too strong for the rest of the opposition.

They both endured tough matches with Beth Wilson challenging Jaz all the way in a high quality final, but finally England Number girl 9 Jazmine Johns took the girls under 18 title.

Nat Sheehan fought his way through to the final by beating Plymouth’s Jordan Bone in a highly entertaining defence versus attack semi final. In the other semi final Ollie Buddell overcame Ed Haskell proving he still had plenty to offer in his final junior year.

In another high quality final Ollie Buddell proved too strong for Nat, justifying his number 1 under 18 seeding and won the seasons and Plymouths first Junior 1 star Open championship.

All the competitors, parents and coaches displayed great sportsmanship throughout the tournament which ensured the smooth running and this was endorsed by the ETTA referee Shawn Haskell.

Special thanks go to Debbie Whiting, Jan Marshall, Wendy Haskell and Laura Bone for their hard work keeping all the competitors and parents fed and hydrated on a long hot day.