Liam Pitchford feels fatigue from his epic semi-final proved costly as he was beaten in the phase 2 final at the world Olympic qualifying tournament – plus reaction from Paul Drinkhall and Tin-Tin Ho to the tournament. 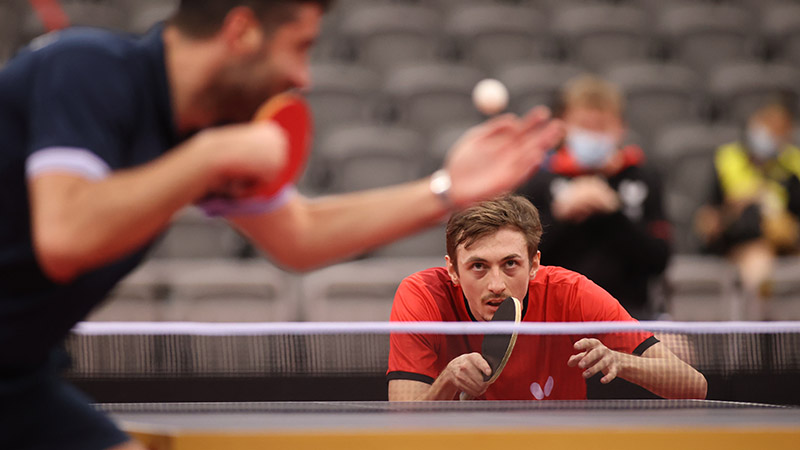 Liam Pitchford feels fatigue from his epic semi-final proved costly as he was beaten in the phase 2 final at the world Olympic qualifying tournament – but he has the consolation that a place in Tokyo is in his grasp via his world ranking.

Pitchford was defeated in five games by Russia’s Kirill Skachkov, who claimed the last of four men’s qualifying places which were decided in Doha.

It followed a 4-3 victory – sealed 14-12 in the decider – over Panagiotis Gionis in the semi-final, a match which lasted over an hour. By contrast, Skachkov played his semi-final earlier in the day and won 4-0.

Pitchford said: “Obviously, I went out there to win against Skachkov, but I think I was slightly fatigued from the match earlier.

“I had chances and leads in sets in the final, but it came down to loss of concentration, probably due to fatigue – the match in the morning took it out of me mentally and physically. I was a bit slow in on the receives in the afternoon and a bit passive on the next ball.

“He had nothing to lose and was fighting for his place at the Olympics, but it was slightly different for me because I will qualify by ranking anyway.”

Pitchford felt the win against Gionis, and the earlier convincing victory over Vladimir Sidorenko, were evidence that he was getting back towards his top level after months of not playing competitive matches, and having been hampered by a thumb injury at the WTT events which preceded the qualifiers.

He said: “I was a bit rusty and not happy with how I played here, but the main thing was to get some matches under my belt after not playing any for four months.

“Against Sidorenko, it was a dominant performance and, against Gionis, I’ve always had tough matches against him and hadn’t practised against a defensive player for a long time, so I was pleased to get through.”

After that, an unspecified number of places at the Olympics will be awarded on the basis of world ranking – and Pitchford is currently the highest-ranked player who has not already qualified or is ineligible under the two-player-per-nation limit for the singles competitions at the Games.

For Ho, Carey and Drinkhall, there was the disappointment of not getting through the first phase of the qualifiers in Doha, but there are still positives to take.

Ho, who was beaten by world No 32 Margaryta Pesotska in her second match, said: “I would have liked to have qualified, obviously, so I didn’t reach the goal, but I’m happy with how I played in the last match.

“If I can build on that and use it to play better, then hopefully I can get better results at the European qualifiers.

“It was my first international competition for a year, so it was good to get to play in three tournaments. It was a really good standard and there were quite a lot of upsets and close matches.

“It was good to get good practice and to see such good players up close. There will be a lot of good players at the European qualifiers, so hopefully I can use this experience to my advantage.”

Sidorenko is ranked 185 in the world, well below Drinkhall at 56, but had defeated world No 21 Quadri Aruna in the previous round and carried his good form into the tie. It was a third defeat to lower-ranked players for Drinkhall at his three-tournament spell in Doha

Drinkhall said: “It’s been a difficult year for everybody and you could see across the board there were a fair few results you wouldn’t have expected beforehand.

“Before covid, I’d been working on not losing to people below me, to pull up my bottom level and be more safe and secure in those matches – and I’d made that big improvement before covid and was getting through those matches.

“All three players I lost to were below me and although they were in form and they are good players, I’m usually a better player than them.

“So, it was a bit disappointing that mentally I struggled to get the right balance in the matches and didn’t manage to get it right.

“But you get better with matches and with practice and the losses from those three events can all help me to get it right for the coming events.”

Carey was beaten in six by world No 74 Paulina Vega of Chile in the second round, having overcome Zauresh Akasheva of Kazakhstan 4-0 in her first match.

The Welsh No 1 said: “I felt like there were a lot of positives with my game, but I need to improve my negative aspects to have an all-round better game.

“I felt like I played bravely, and this has been something I’ve been working on. Against Vega, I think she was slightly more consistent and had more patience to rally for longer, whereas at points I wanted to win the point too badly.

“It was great to be back playing internationally and I’m looking forward to the next chance.”