Experience of previous Games is the key for four British players who complete the ParalympicsGB squad for Tokyo. 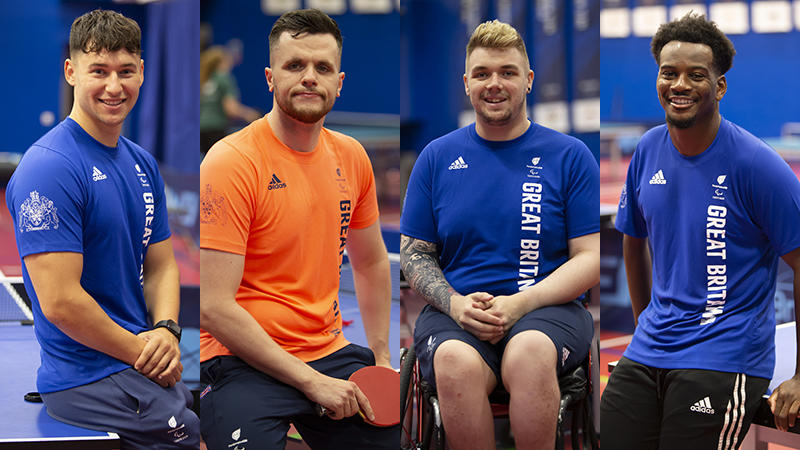 Experience of previous Games is the key for four British players who complete the ParalympicsGB squad for Tokyo.

Aaron McKibbin, Ross Wilson, Jack Hunter-Spivey and Ashley Facey Thompson all travel to the Far East knowing they can draw on their memory banks from Rio – and, in the case of the first two, London 2012 as well.

McKibbin and Wilson have the further boost of knowing what it takes to get on the podium, having taken bronze in the Class 6-8 Men’s Team event in both 2012 and 2016, alongside Will Bayley.

They have a new team-mate this time in Billy Shilton and both are also in the Class 8 singles as they target further glory on the biggest stage.

Londoner McKibbin, who turns 30 during the Games, said: “It’s a huge honour to represent your country and be one of the few people who can say they’re a Paralympian and I’ve been lucky enough to say that three times now.

“Winning the team bronze in Rio motivates me unbelievably – after that competition my thought almost instantly was, ‘I want to be able to try and compete for a singles medal at the next Games’. All my work went into getting my level as high as possible and I feel that my level is now good enough to be in the mix for a singles medal.

“There is no feeling like winning a (Paralympic) medal it is the greatest feeling I’ve ever had. To get it in London was amazing and to be the person winning it against China made it just that bit more special, so I’d love to emulate that and that is my aim to go out there and try and get that feeling again.”

Ross Wilson has experienced plenty more highs since Rio, including winning the World Championships and Commonwealth Games gold medals in 2018.

The 26-year-old from Minster said: “I feel that in some ways I’ve got the experience behind me and in other ways it will be a completely different experience altogether because of covid and the lack of competitions beforehand but I’m really looking forward to it.

“Because I haven’t played a competition for so long it will just be nice to be able to get out there and compete again no matter what the result is; I’m just looking forward to getting out there and seeing what I can do and I’ll give it my absolute best shot.

“It’s an amazing feeling when you know the whole country is supporting you and you are doing what you love and you just want to do everyone proud and just give it your all really.

“To add the Paralympic title to my World and Commonwealth ones would be incredible but I’ve just got to take each game as it comes. For me just playing out there and for everything to be going ahead is a really special feeling and I can’t wait to experience it.”

Hunter-Spivey narrowly missed out on London 2012 but made it to Rio, and he goes into Tokyo having won the World Qualification Tournament in June.

The 26-year-old from Merseyside will compete in the Men’s Class 5 singles.

He said: “As a 10-year-old kid wanting to be a Paralympian, to be going to do it again for a second time it is a feeling I’ll never get over. I’ll never get tired of saying I’m a Paralympian and it will be something I’ll never take for granted. It’s a special feeling going out there to represent my country at the highest level – it’s amazing really.

“Winning the World Qualification Tournament was the culmination of 18 months of hard work and leaving no stone unturned to go out there and do it and it paid off.

“That feeling when I won the final point was something I’ll never forget; I felt that I was watching myself from above the table but it’s a memory that will last forever win, lose or draw in Tokyo.”

Facey Thompson, also 26, joins the squad on a wildcard having narrowly missed out at the qualifying tournament.

He will compete in the Class 9 singles and Class 9-10 team alongside Joshua Stacey.

Facey Thompson, who is from Stratford in London, said: “I’d had a lot of chances to qualify but things didn’t go my way although to be fair my performance was good and I was very happy with how I performed.

“I just missed out on qualifying and I’m happy that I got the wildcard. I was at home watching the Tour de France when Gorazd (Performance Director Gorazd Vecko) called me with the news.

“It will be my second Games and it’s going to be amazing – the circumstances are very different but it should be good. I’ve been through an emotional wave through covid and trying to qualify and I was gutted not to get there at the World Qualification Tournament so it will be great to go to Tokyo and hopefully be competitive.

“I’m very proud to be selected – I’ve had a lot of people help me along the way over the last five years and I’m glad to say thank you to everyone who believed in me the whole way and backed me. The whole experience from Rio will help me – I’ve had experience of a Games and it is a big tournament but the same sport, so you’ve got to just remember that.”