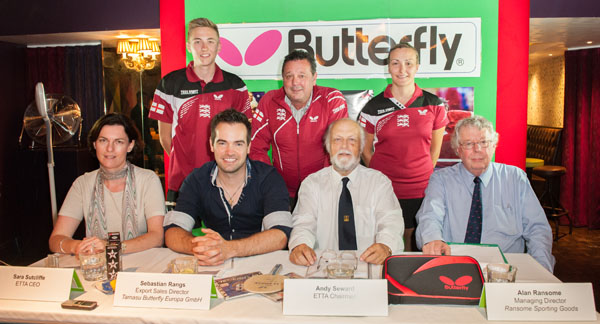 The English Table Tennis Association (ETTA) has announced a new four-year sponsorship agreement with the world’s leading equipment manufacturer Butterfly for the provision of the English National Team kits at the senior, junior and cadet levels.

In a deal worth more than £100,000 it will see Butterfly once again supply the England kit for most major international events including World Championships, European Championships, Home Internationals and all junior and cadet events.

Representatives from the ETTA and Butterfly met at Bounce, a restaurant, bar and social table tennis club, where the game was created and patented in 1901 to make the announcement and release the first glimpses of the new England kit, which was modeled by current English National Champions Liam Pitchford and Kelly Sibley.

ETTA Chairman Andy Seward said: “We would like to welcome Butterfly on board as the ETTA’s official clothing supplier for the next four years. All the England teams will be wearing the Butterfly clothing when on duty and I think that is excellent for the sport and for English table tennis in particular.

The new deal will further the relationship between English table tennis and Butterfly who also already sponsor 18 of the leading English players and 15 major clubs who compete in the British League.

Sebastian Rangs, Export Sales Director for Butterfly Europe, said: “We as Butterfly are very pleased that the England team will be wearing our brand again as we have done in the past.

“We have a lot of very good players already in England like Kelly [Sibley] and Liam [Pitchford] that have been using our equipment and of course we are more than happy to see them in Butterfly National Team clothing again.”

For the new ETTA Chief Executive, Sara Sutcliffe, it was a first press call on England duty as she begins to steer the organisation into a new era. The extension of the partnership with Butterfly is another step towards developing the value of the ETTA brand.

Mrs Sutcliffe said: “It’s always important for a governing body and especially for our England teams to have the support of commercial partners.

“That raises the sense of importance in their role as England representatives and for the ETTA brand, it’s fantastic to be able to sit side-by-side with a premier brand like Butterfly.”

She added: “I can’t wait to go and see them [Liam and Kelly] now and get out there and see how our teams and our players perform in the major tournaments. I’m passionate about sport and I want to learn more about the table tennis world. I appreciate the hard work that our players are putting in by representing both the ETTA and their country and being role models in our sport.” 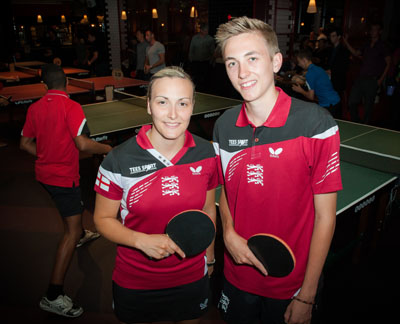