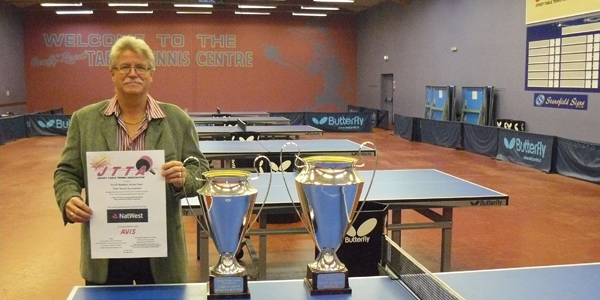 “Repeat entries have been coming in already for our increasingly popular NatWest Jersey Open at Easter (which continues to attract top players from all over the World), part of the ETTA Grand Prix circuit for 2013/14,” said J.T.T.A. President Chris Band. “Good Friday sees the team tournaments for two man teams of men, women, veterans and a junior team giving the players something different and an extra day of competitive play.

“The Saturday and Sunday are the standard Grand Prix format of bands and then open singles events. Early booking is highly recommended to get good transport deals either by flying or on the ferry. Coupled with this we have negotiated an excellent deal with a great hotel next door to our purpose built table tennis centre and also car hire with AVIS.

“This is obviously another incentive for players to book their places early as there is a limited maximum entry. We are also offering a training camp for the week before the tournament run by Damien Nicholls and Sam Perry. I would, however, strongly recommend that anyone interested in entering to book without further delay so as to avoid disappointment.

“We have 18 new top of the range tables and ancillary equipment all housed in a purpose built centre and with entry fees the cheapest of the Grand Prix circuit what is stopping you from booking up now?”